Accessibility links
In Spain, The Church Offers More Than Salvation Spain has Europe's highest jobless rate, but the Catholic Church is still hiring. A group of Spanish bishops has produced a recruitment video as they seek to boost the dwindling numbers of priests. And it appears to be having some initial success. 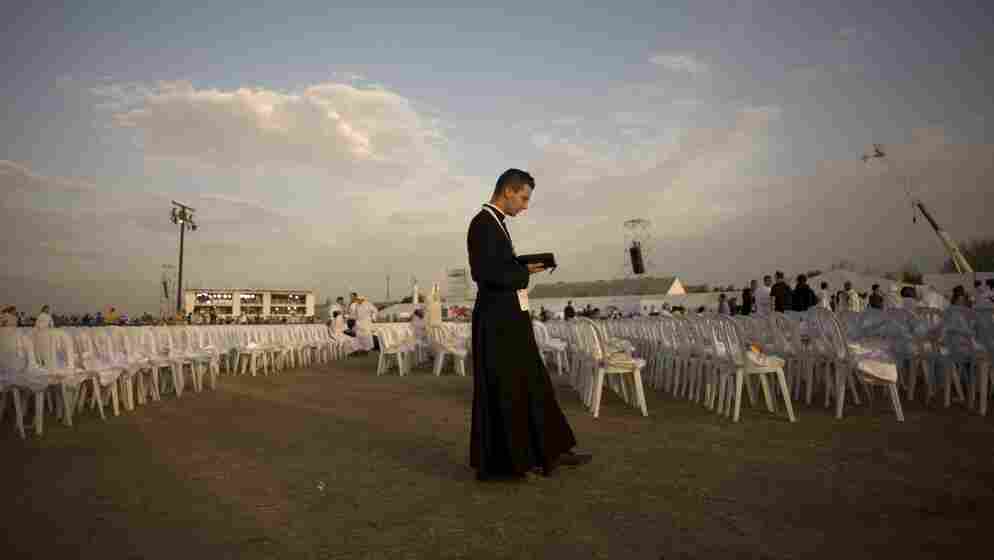 A priest prays before a Mass celebrated by Pope Benedict XVI at the Cuatro Vientos air base outside Madrid during World Youth Day festivities in August 2011. The Catholic Church is hoping to provide an attractive option for young job seekers in Spain, which is suffering from unprecedented unemployment. Jorge Guerrero/AFP/Getty Images hide caption

Spain has Europe's highest unemployment rate, with nearly 1 in 4 people out of work. The country has dipped back into recession, and layoffs are on the rise.

Catholic Church: 'We Want You'

But there's one organization there that's still hiring: the Catholic Church. A group of bishops has launched a savvy campaign on YouTube to recruit new priests from the swelling ranks of Spain's unemployed.

The 2 1/2 minute video starts with words emerging from a smoky background.

"How many promises have they made to you, which haven't been fulfilled?" a voice asks. Then a young priest pops up.

Young priests speak into the camera one after another, mixed with footage of them marrying people, praying over a hospital bed and to a man behind bars.

"I do not promise luxuries," another priest says. "I promise your wealth will be eternal."

The video, released last month, is part of the Catholic Church's attempt to boost its otherwise dwindling numbers when so many are out of work. And it appears it's had some initial success: Enrollment in seminaries here rose 4 percent last year, compared with falling 25 percent over the past decade.

"For two days, this was the most-watched video in Spain, with hundreds of thousands of downloads," he says. "It went viral, and we've had journalists calling us from five continents. Venezuela has even asked for the copyright."

But church attendance is still falling in Spain. And it's tough to find young Spaniards willing to take a vow of celibacy for life, no matter what the economy is like.

"I personally don't believe in God. So I wouldn't do that," says 18-year-old Guillermo Cique, laughing.

He and his friends are skateboarding off curbs in front of Madrid's soaring cathedral on a recent day. An iPod blasts Spanish hip-hop, and his friend improvises a rap about corruption and banks. 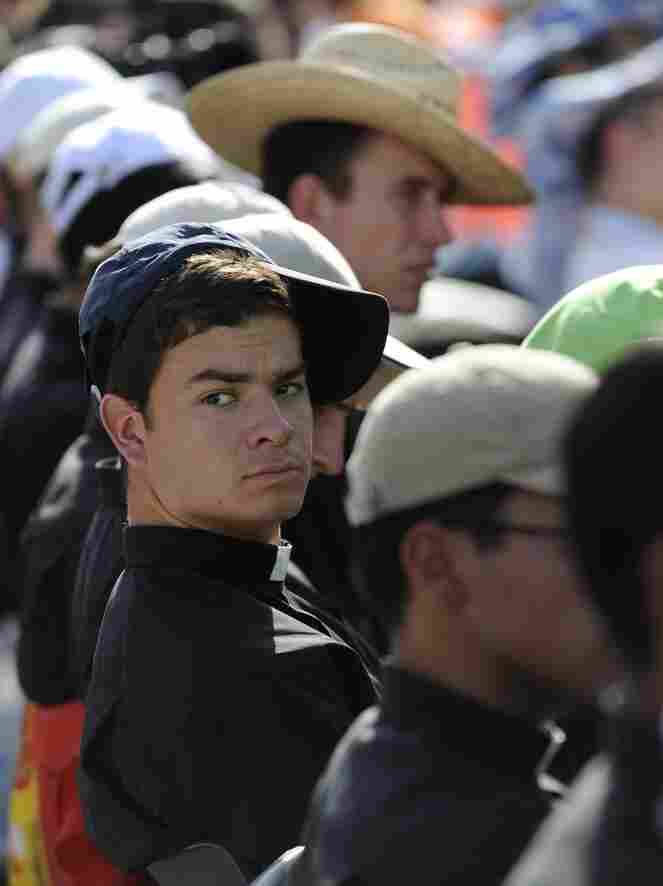 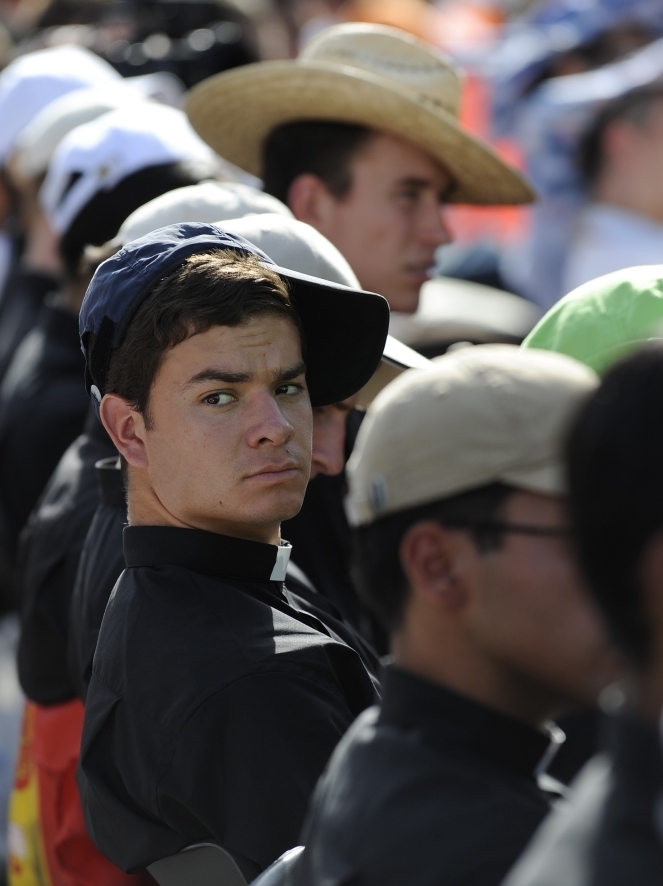 A priest watches Pope Benedict XVI on a giant screen during Mass at the Almudena Cathedral during World Youth Day festivities in Madrid last year.

The jobless rate in Spain is more than 50 percent for those under 25. Still, Cique says there's no chance he'd consider the seminary.

"Why would you want to be a priest? In jail, you get free food also," he says.

Even Meneses, the bishop, acknowledges it's a hard sell for today's youth.

"I don't think any youngster is really going to enter the seminary just for job security. That idea came from the marketing people," Meneses says. They put it in as a bit of a provocation — to grab your attention, to shock you and get you to watch the video."

And it worked for that. But the bishop says Europe's debt crisis could help his recruitment drive in another way. He's targeting people bewildered by bailouts and unemployment — people searching for what's really important.

It's something even economists note about people in a recession.

Gayle Allard is a professor at Madrid's IE Business School.

"They pass from a materialist to a post-materialist phase, where they start thinking more about quality of life and meaning of life," Allard says.

"The good thing about crisis is that maybe it awakens this other side of us, and helps us to step off the treadmill a bit, and think about why we're here — besides just paying a mortgage," she says.

As for whether the church will benefit from that, Meneses shrugs: "We'll have to see next year's numbers."