Accessibility links
Pledge By Elizabeth Warren And Scott Brown Keeps Attack Ads At Bay It was no surprise when outside groups started launching attack ads in the high stakes U.S. Senate race in Massachusetts between Republican incumbent Scott Brown and Democrat Elizabeth Warren. But an unlikely pact between the candidates to halt those attack ads is working — at least for now. 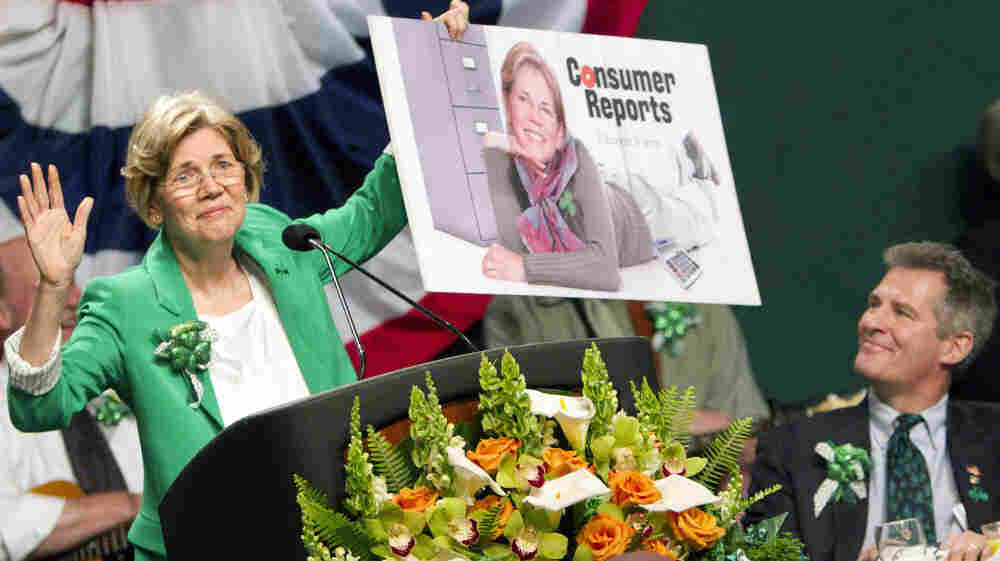 Democratic Senate candidate Elizabeth Warren holds up a poster of herself as Sen. Scott Brown, R-Mass., looks on during the annual St. Patrick's Day Breakfast in Boston on March 18. A civility pledge between the candidates has kept attack ads largely on the sidelines in their race. Michael Dwyer/AP hide caption 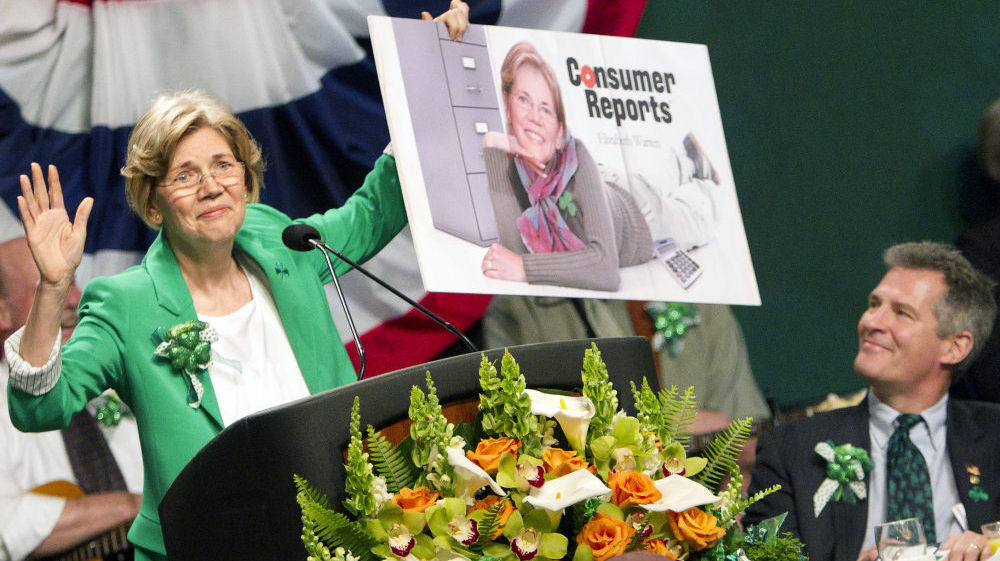 Democratic Senate candidate Elizabeth Warren holds up a poster of herself as Sen. Scott Brown, R-Mass., looks on during the annual St. Patrick's Day Breakfast in Boston on March 18. A civility pledge between the candidates has kept attack ads largely on the sidelines in their race.

It was no big surprise when outside groups started spending millions of dollars on attack ads in the high-stakes U.S. Senate race in Massachusetts between Republican incumbent Scott Brown and Democrat Elizabeth Warren.

Left-leaning groups like the League of Conservation Voters accused Brown of "repeatedly voting against protecting our environment and public health."

But in January, the biting back-and-forth came to an abrupt end when the two candidates signed what they called the "People's Pledge."

Under the pact, a candidate who benefits from a third-party ad has to pay a penalty to a charity chosen by the other. As the candidates wrote in a letter to third-party groups: "Your spending will damage the candidate you intend to help."

The deterrent worked; outside groups ceased their fire and the contest took a sharp turn from high noon to high horse.

"I'm proud to say we're serving as a model for the rest of the nation," boasted a Brown radio ad. Instead of the rhetoric sinking lower and lower, the candidates were trying to one up each other in political piety.

Brown claimed credit for having the idea of the pact. Warren said his deal had "loopholes Karl Rove could drive a tank through," and she insisted she's the one who made it real.

Outside Spending May Oust Indiana Statesman

When the first ad violating the pact aired in March by a group supporting Brown, Warren was indignant. But not to be outdone, when it came time to pay his fine, Brown wrote a check for double the agreed upon amount.

"The tap dance is certainly who is squeakier cleaner, " says Tobe Berkovitz, a communications professor at Boston University. "They're both showing they are sort of model citizens, and both campaigns are being very cautious, because no one wants to be seen as the bad guy in the race."

The improved tone of the campaign, as well as prime-time TV, came much to the relief of voters — and channel surfers — like Martina Jackson, a Democratic activist in Newton, Mass.

"It is amazing. It's much, much better," she says. "It's relatively civilized, rather than all that mud thrown at each other. I don't miss it!"

On the other hand, one can only imagine ad makers lamenting lost opportunities — especially in a week like this one.

With news that Brown, who's ardently opposed to President Obama's health care law, is using it to get insurance for his adult daughter — and stories about Warren claiming to be a minority because of a great-great-great grandmother who she says was Native American — "we would be buried in mud," says Jeffrey Berry, a political science professor at Tufts University in Medford, Mass.

"You can envision an ad of Elizabeth Warren in wigwam," says Berry. "Or wearing a wig, depending on how nasty [they] wanted to be."

But instead, since any such ads would have to come from the campaigns themselves, the negative ads never appeared. The candidates were relatively restrained, and it all amounted to just a minor dust-up, impressing even the early skeptics, who doubted such a nuclear disarmament would ever stick.

One local newspaper called it a near miracle. To others, the miracle remains to be seen.

"I don't think it's gonna stick " says Scott Hibbard, 41, a chef from Roxbury. "In due time, there will be some negative ads. It's way early. And once [the race] starts sliding toward one side or the other, the other one is going to have to do something, and that's when the mud starts to fly."

Indeed, the ceasefire depends on the cooperation of outside groups, and many are already restless on the sidelines.

When the Coalition of Americans for Political Equality, for example, was asked to pull its ad in March, chairman Jeff Loyd did so only reluctantly.

"We disagree with the purpose of the pledge because we wish to exercise our freedoms and legal right to support anybody we want," Loyd says.

Republican strategist Todd Domke predicts: "At some point [independent groups] will probably say, 'Forget the People's Pledge ... We're people, too. It's time to go to war.'"

Domke says it's unrealistic to expect independent groups to sit on their hands while control of the Senate may hang in the balance.

"I don't think I'm being cynical in saying it's just a matter of time before [outside groups] decide to thrill their donors by launching attack ads that will make national news," Domke says. "They're not in this to be idealistic or to make Massachusetts a model for civility. They're in this to win and to be influential."

As far as that "model for the rest of the nation" goes, so far, the few attempts to follow the lead of Brown and Warren — for example in Montana and Virginia — have failed.

"It would be wonderful if this was the beginning of a trend," says Berkovitz. "But I don't have my hopes up."