Accessibility links
A Different Russia Meets Putin's Third Term On Monday, Vladimir Putin will be re-inaugurated as president. Putin has put away the tough-guy image that worked well for him during his earlier eight years as president. That might be because his transition to a third term has been rocked by unexpectedly large and loud protests. 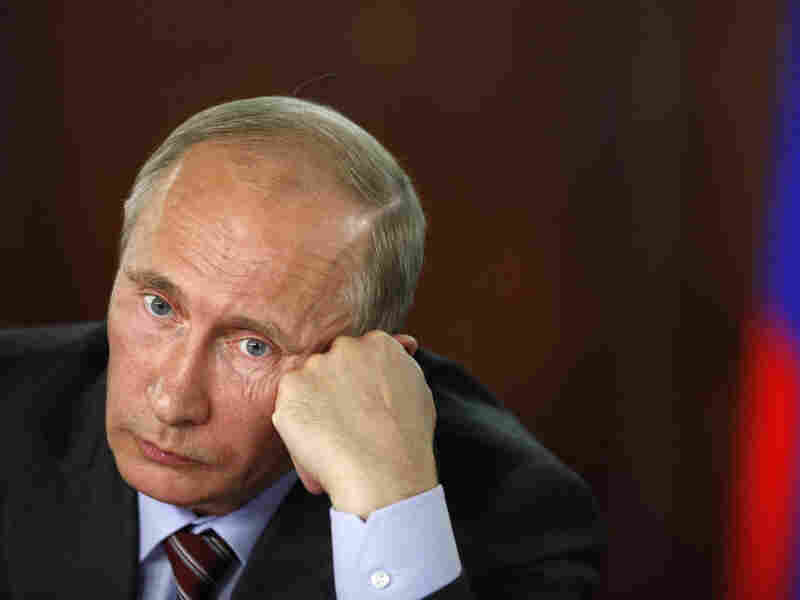 On Monday, Vladimir Putin will again become president of Russia. When he is inaugurated in the Kremlin, it will be for a third term, even though the Russian constitution limits presidents to two four-year terms.

The restriction, however, is for two consecutive terms. It doesn't rule out a third term if someone else holds the presidency in the interim. That's exactly what Dmitri Medvedev did. He was elected president after Putin, but declined a run for a second term.

This political swap succeeded, but Putin will be leading a different Russia after his re-inauguration.

Putin has said very little since his re-election in March. He has put away the sharp-tongued, profane, tough-guy image that worked well for him during his earlier eight years as president.

For the last four years, Putin has been running the government as prime minister, and he was restrained when he addressed the Russian parliament last month.

He told the deputies that they had come to the end of the post-Soviet period. Ahead, he said, lies a new stage in Russia's development that can ensure prosperity to citizens for decades ahead.

Since he was re-elected, Putin's public comments have been long on generalizations like this and short on specifics — perhaps because his transition to a third term has been rocked by unexpectedly large and loud protests.

"Russia without Putin" and "Putin to Prison" were slogans that tens of thousands chanted. The anti-Putin movement grew rapidly, surprising his supporters and opponents alike.

It forced Putin to rally his own partisans in demonstrations, with pro-Putin speakers trumpeting that the ranks of his voters would grow.

That did not happen. Quite the opposite, says Lilia Shevtsova, a political analyst with the Carnegie Center here in Moscow.

"Russia started to ignore him, to reject him and the most important thing, he lost Moscow. He lost the most educated, urban population," she says. "He's the president of minority, and his legitimacy among the educated layers of the society and among the big cities is definitely crumbling."

Shevtsova and many others believe the official results giving Putin 62 percent of the vote were based on fraud.

As for Medvedev, many were shocked he declined to run for a second term. He might have been re-elected. Often he was seen as the liberal to Putin's cold conservative, as in a television interview two weeks ago.

"If we are talking about those who protested against the positions of the authorities, I respect their rights," Medvedev said. "I don't agree with everything they say, but they deserve respect."

For many who have taken to the streets, like political analyst Andrei Piontkovsky, there is little respect for Medvedev.

"It's obvious to any observer in Russia and abroad that Medvedev was actually a stooge, keeping warm the seat of presidency for Putin [to] return now," he says.

A Certain Kind Of Freedom

Sometimes it seems there is a tendency to exaggerate the nature of Putin's past record. Piontkovsky first labeled him a dictator, but then checked himself.

"If he was a dictator like Stalin or Hitler, we wouldn't sit in my kitchen and discuss his rule," he says.

The same goes for Shevtsova. Much has changed in Russia for the better, she says.

But the mass media are not free in Russia, and people like Shevtsova and Piontkovsky are banned from appearing on television. The government's control of television is near absolute. The long list of complaints about Putin rarely reaches a mass audience.

Those complaints include charges of widespread corruption, abuses by the police and the judiciary, and ballot rigging.

It is no longer the old Soviet Union to be sure, but Putin's Russia is not yet a fully fledged democracy either. Monday, with Putin once again president, more and more Russians are willing to take to the streets to say so.