Accessibility links
Austerity Loses As Greece's Fringe Parties Win Big According to exit polls, angry Greek voters have overwhelmingly punished the two major parties that endorsed draconian international loan agreements. There is no front-runner in sight, but the fringe parties on the left and the right that strongly oppose the bailout terms have benefited the most. 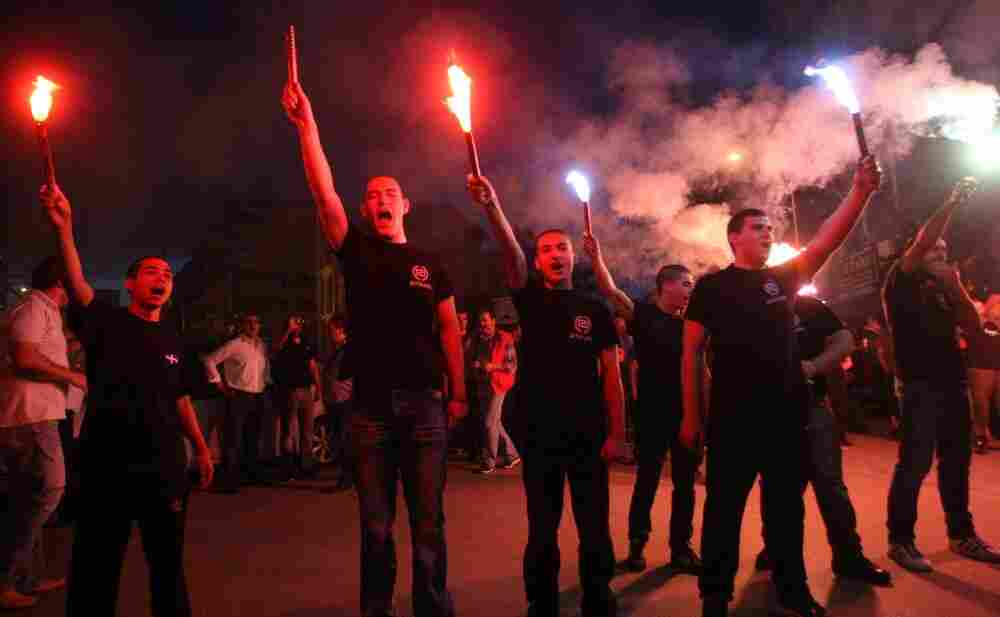 Members of the Greek neo-Nazi Golden Dawn Party celebrate in Thessaloniki on Sunday. Golden Dawn is now set to enter parliament for the first time since the end of the military junta in 1974. Sakis Mitrolidis/AFP/Getty Images hide caption 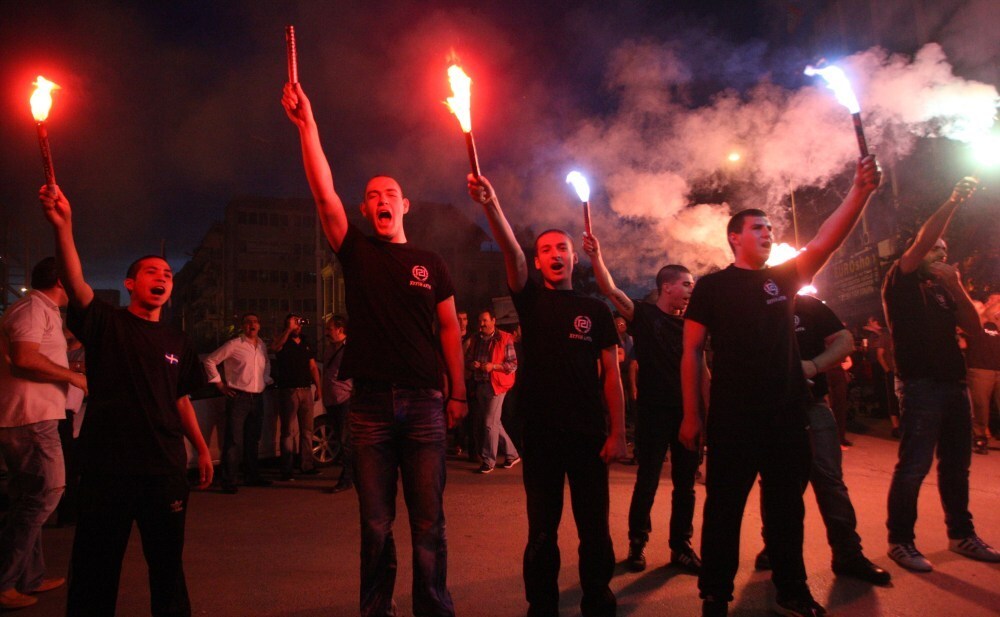 Members of the Greek neo-Nazi Golden Dawn Party celebrate in Thessaloniki on Sunday. Golden Dawn is now set to enter parliament for the first time since the end of the military junta in 1974.

There is no front-runner in sight, but the fringe parties on the left and the right that strongly oppose the bailout terms have benefited the most.

The socialist PASOK and the conservative New Democracy parties that have alternated for four decades — and uneasily co-governed for the last six months — are imploding.

Exit polls today attribute to each party only about 20 percent of votes cast.

The two major parties are taking the brunt of a German-inspired austerity program to overcome Greece's debt crisis.

The country is in deep recession, unemployment has hit 21 percent and GDP has been slashed by 20 percent in just two years.

In a major upset, Syriza, the Coalition of the Radical Left, was running second behind New Democracy and ahead of PASOK.

On the other side of the spectrum, the neo-Nazi-inspired Golden Dawn appears poised to enter parliament for the first time.

According to the Greek electoral law, the party that wins the most votes gets a bonus of 50 seats in the 300-seat parliament. So, despite what appears to be their extremely poor results, PASOK and New Democracy might be able to scrape through and continue their governing coalition.

But it would be a very weak government facing widespread opposition to the bailout terms and austerity program.

The next government also has the tough task of slashing another $15.5 billion from the state budget over the next two years in a country where some 20 percent of the population already lives under the poverty line.

Analysts pointed out a significant fraying of old party loyalties. They say that today, 6 out of 10 voters switched from previous allegiances.

The election is being closely monitored by European Union officials and Greece's international creditors, which insist that the next Greek government uphold its international commitments. Results are also certainly causing further fibrillation among those Northern European proponents of fierce austerity on debt-heavy Greece.

It is not clear whether a rebellious Greece could be forced legally out of the euro-zone.

The pressure on Greek voters was intense — Berlin officials said Greece will have to bear the consequences if the next government does not respect its commitments. But many Greeks did not think the threat of banishment, bankruptcy and further impoverishment was credible.

Many voters cast their ballots pinning their hopes on what they see as a mood shift throughout Europe: They no longer see themselves as the isolated, international financial pariah.

The anti-austerity movement is growing in Spain, Italy, Ireland and even The Netherlands. It's even toppled Germany's loyal ally President Sarkozy of France.

Greeks are hoping this could be a game-changing moment in Europe that weakens the austerity-first crowd and offers alternative policies focusing on growth rather than cutbacks.