Accessibility links
The Serious Comic Art Of Daniel Clowes Comic artist Daniel Clowes never expected to see his cranky, rebellious characters in a museum — in fact, he often uses them to poke fun at the world of fine art. But that didn't deter the Oakland Museum of California, which is now hosting an exhibition of Clowes' work. 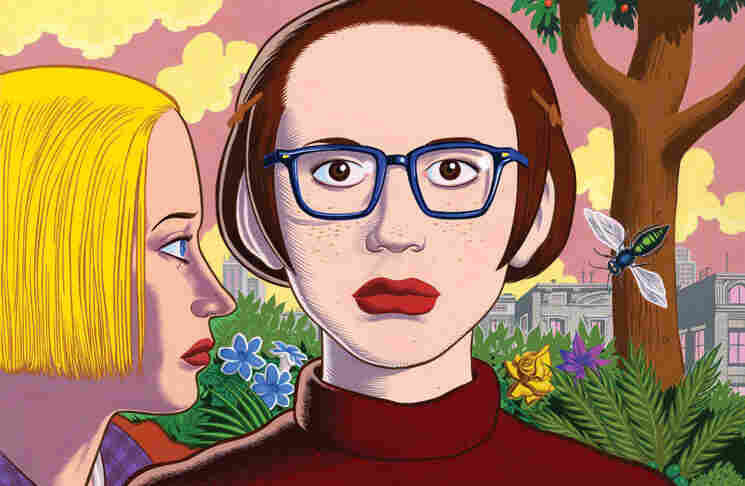 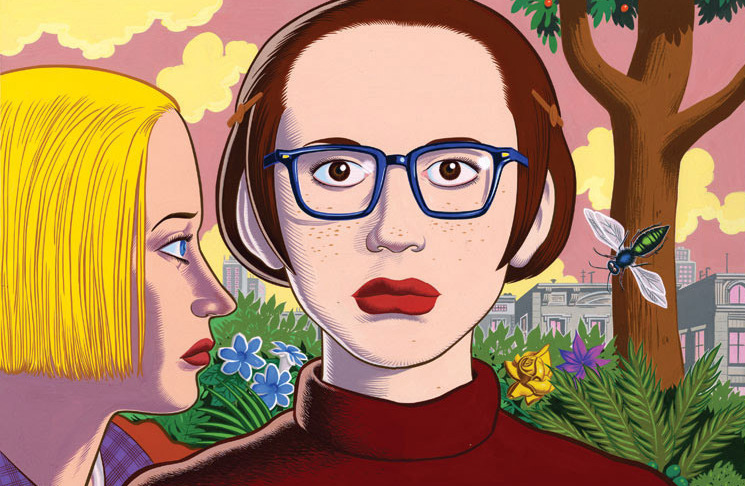 Artist Daniel Clowes says Enid, the cantankerous heroine of Ghost World, would probably hate the book she stars in.

Comics used to be seen as cheap throwaway entertainment for children and teenagers. But over the last few decades, comics have grown up; they're even released in longer formats, on nice paper with hard covers, as graphic novels.

Daniel Clowes is one of the artists cited for turning the form into serious art — in fact, the art has gotten so serious that his work is now in a museum. Clowes is one of the best-known comic artists working today, with two of his books made into Hollywood films: the Academy Award-nominated Ghost World and Art School Confidential.

The Art Of Daniel Clowes

Clowes never aimed to be the kind of artist museums collect. But now, the walls of the Oakland Museum of California are covered with his drawings. It's "quite embarrassing," he laughs.

After a stint as an art student at Brooklyn's Pratt Institute in the 1970s, Clowes tried unsuccessfully to get work as an illustrator. Sitting around drawing comics on his own, he decided to send a strip to underground publisher Fantagraphics. He was expecting rejection.

Instead, "they called me up and offered me a monthly comic book, and I felt like I hadn't earned anything," he says. "You know, it's like all of a sudden, you're being made president after you've been like, you know, on the city council in Cleveland."

"Enid, if she knew about Ghost World, she would just hate it," Clowes says. "She'd be like, 'This book is, like, so horrible.' You know, my characters are like the worst customers I could imagine."

Original drawings of Enid and dozens more of Clowes' eccentric characters adorn the gallery walls. David Boring is on a quest for the perfect wife. Then there's The Death-Ray, a super hero spoof about a guy named Andy who gets special powers every time he puffs on a cigarette. And Wilson, who stars in Clowes' most recent work, is an unemployed, divorced, grumpy loner. He talks to people in public places in a desperate attempt to make some kind of human connection.

"I certainly share a lot of the anxiety and the world views of a guy like Wilson," Clowes says, "although he's a much less palatable version. He's me at my worst moment. He's like me in my moments of road rage, when I'm safely inside my car and I can say what I feel."

But, Clowes adds, he's actually trying to bring out the nobility in characters like Enid and Wilson. "[Wilson] really just wants to connect with people by being his exact true self, which is something none of us ever do, and he's not interested in changing himself to connect with people, which is what all of us do do. It made him seem much more noble when I figured that out about him."

Hear More With Clowes On KQED

Curator Susan Miller discovered Clowes' work more than a decade ago in the adult section of a comic book store in San Francisco's Haight-Ashbury neighborhood. "There was some pornography in there," she says, "but there was also Dan's work, and the Hernandez brothers, and a bunch of comic artists that were making work that didn't fit in the superhero shelf at all. And I think 'adult' meant 'sophisticated.' "

Miller was struck by the themes of loneliness and alienation, mixed with humor and empathy, that ran throughout Clowes' work. She also noticed the quality of his designs — something that's not immediately apparent to readers who've only seen the drawings reprinted in books.

"The quality of that work is lost in the reproduction," Miller says. "So you can actually see the work as it's originally drawn. And you just won't get that in the printed material." 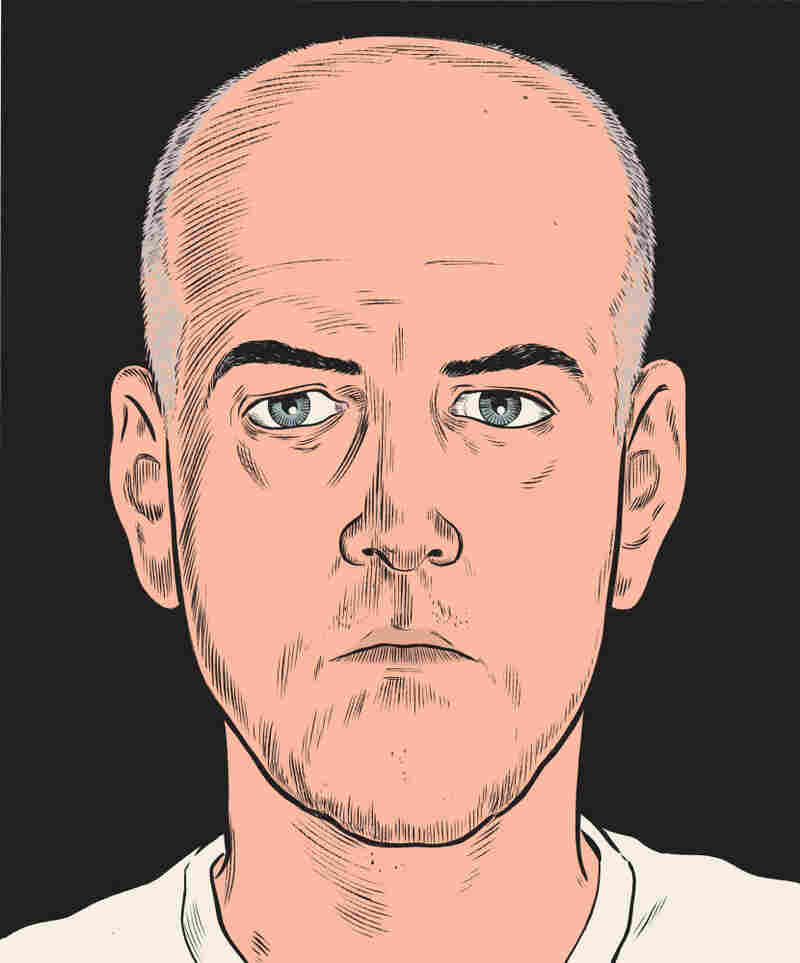 Clowes is the author of Wilson and Mister Wonderful: A Love Story. Courtesy of Drawn and Quarterly hide caption 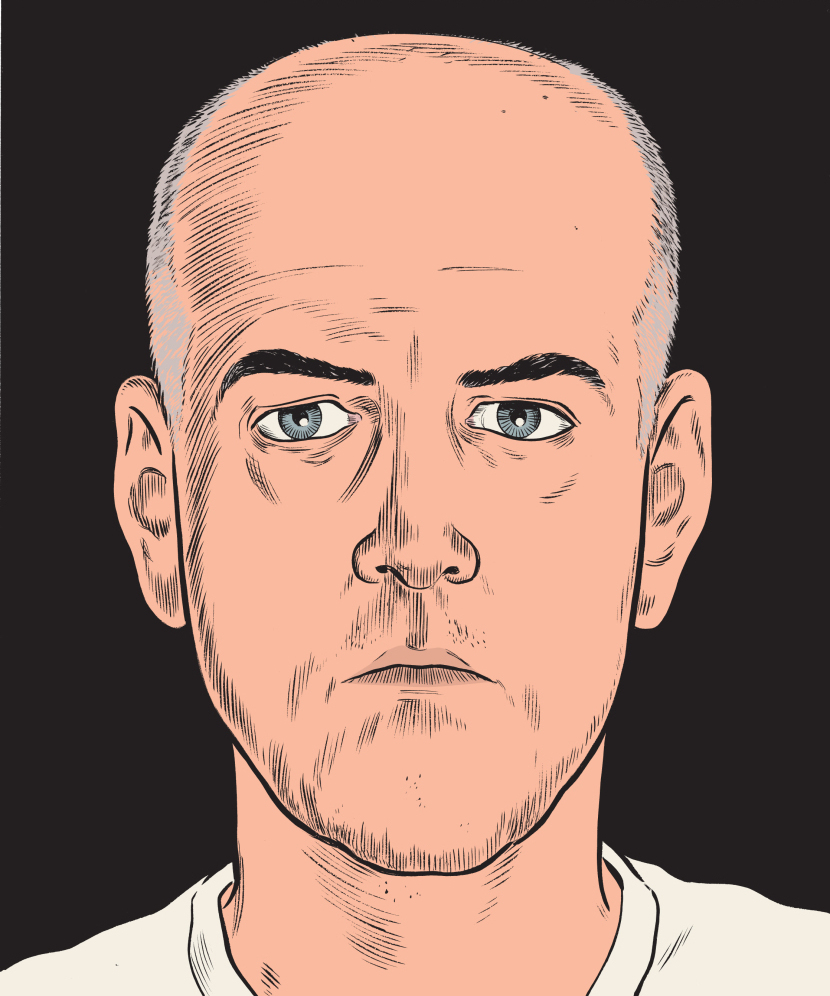 Clowes is the author of Wilson and Mister Wonderful: A Love Story.

Courtesy of Drawn and Quarterly

One of the ironies of having Clowes' work on display in an art museum is that he often pokes fun at the world of fine art. Jerome, the main character in Art School Confidential, finds himself the underdog in art classes because he likes to draw rather than create abstractions or conceptual pieces — an experience Clowes had in real life as a student at the Pratt Institute.

Clowes says his instructors were mostly minimalists and abstract expressionists. "They were all so beyond figural drawings and all that stuff that was so buried and in the past, they couldn't believe anybody was bringing that up again," he says. And Clowes didn't just want to do figure drawings, he wanted to make comics.

"They would just say, 'Well, comics are basically inherently stupid.' The preponderance of the evidence was such that that was possibly true. There were just years and years and years of really dumb comics."

There are still some dumb comics around, but for the most part, the world has changed. Clowes cites the work of underground superstar Robert Crumb as one of his inspirations — and now he, Crumb, and other artists published by Fantagraphics are inspiring a new generation.

And an exhibition like this one has the power to change minds. Museum docent Jeff Cullen says that at first, he didn't really know what to make of it, but since seeing Clowes' work, he's buying comics again for the first time since childhood. Cullen says he's especially moved by the hapless Wilson.

"It was disturbing. You almost don't like him, but then by the end of the story ... I felt a sympathy for him." Cullen says Wilson's story does what art is supposed to do: It holds a mirror up to our own lives.

And iff you want to experience Enid, Andy, Jerome and Wilson for yourself, the show will go on the road later this year, making stops in Chicago, Columbus, Ohio and Washington, DC.