Accessibility links
Romney's 1994 Senate Loss Left Lasting Marks Here's one thing Mitt Romney has in common with President Obama: They both lost their first political campaign. Romney went down in defeat when he took on Sen. Ted Kennedy in 1994. In that race, he learned lessons that he has put in action on the trail — and said things that still echo today. 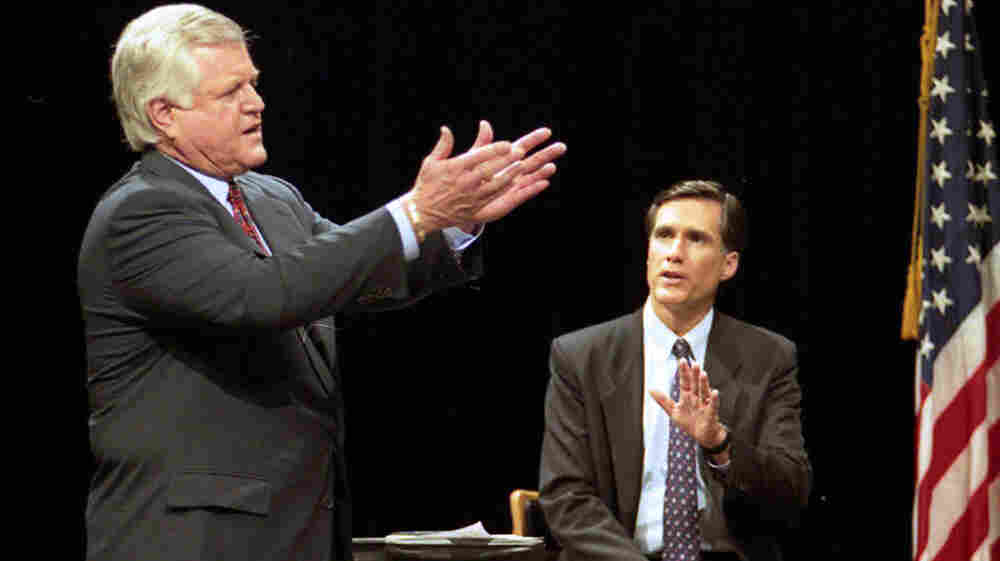 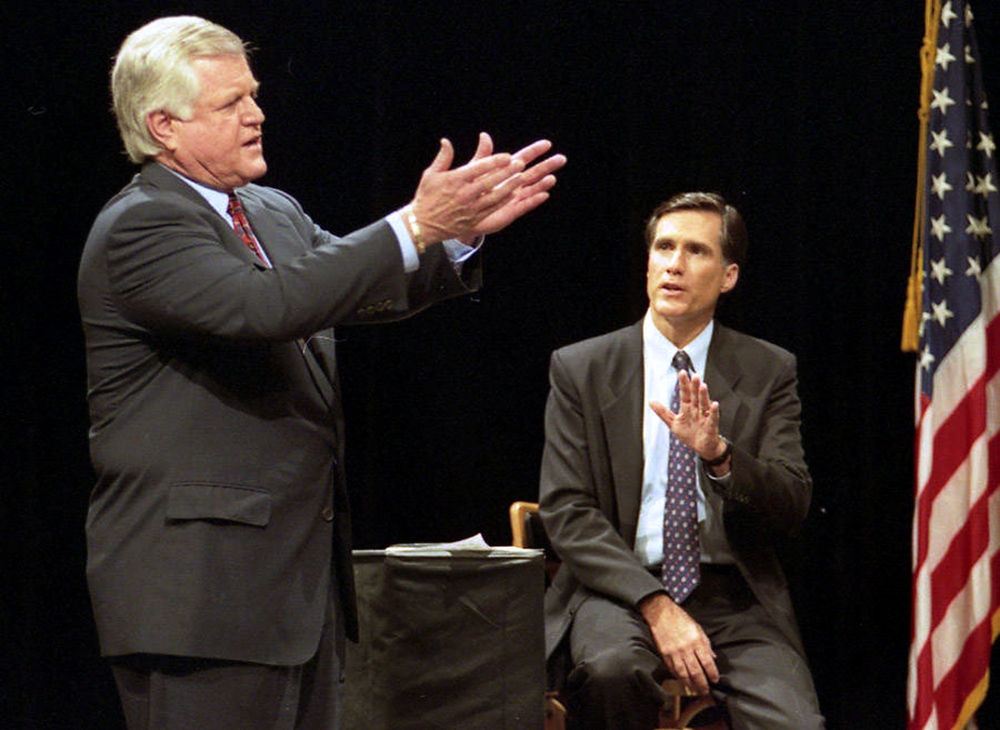 From now until November, President Obama and GOP presidential candidate Mitt Romney will emphasize their differences. But the two men's lives actually coincide in a striking number of ways: Both attended Harvard. Both have been heavily influenced by their respective churches. Each descended from polygamists.

And each man lost his first political campaign. In the first installment of NPR's "Parallel Lives" series, we look at Romney's first campaign.

"Normally, they didn't have anybody who would run against Kennedy," says Mike Murphy, a longtime friend of Romney's who advised him in later campaigns. "I give Mitt a lot of credit for stepping up on what was a very lonely fight."

In 1994, Kennedy appeared to be a lion in winter, says political scientist Paul Watanabe of the University of Massachusetts, Boston. "He was down and out. He was a person who had just experienced, really, the low point of his career."

And Romney was a fresh face — an up-and-comer who had seen huge success in the business world.

Scott Ferson, Kennedy's press secretary during the Romney fight, says he thinks Romney felt in 1994 that "Sen. Kennedy's time had ended, and it was his time." 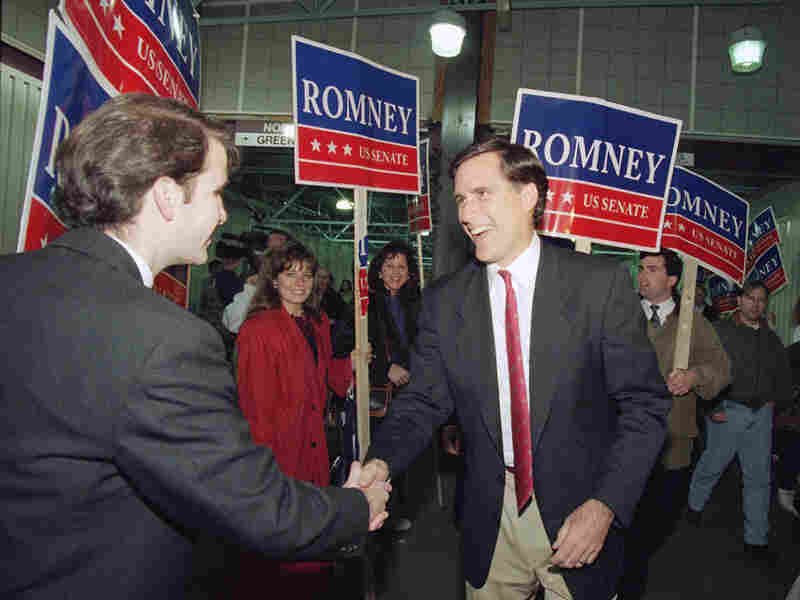 Then a Republican candidate for the U.S. Senate, Mitt Romney shakes the hand of a commuter while campaigning at North Station in Boston on Nov. 7, 1994. Jim Rogash/AP hide caption 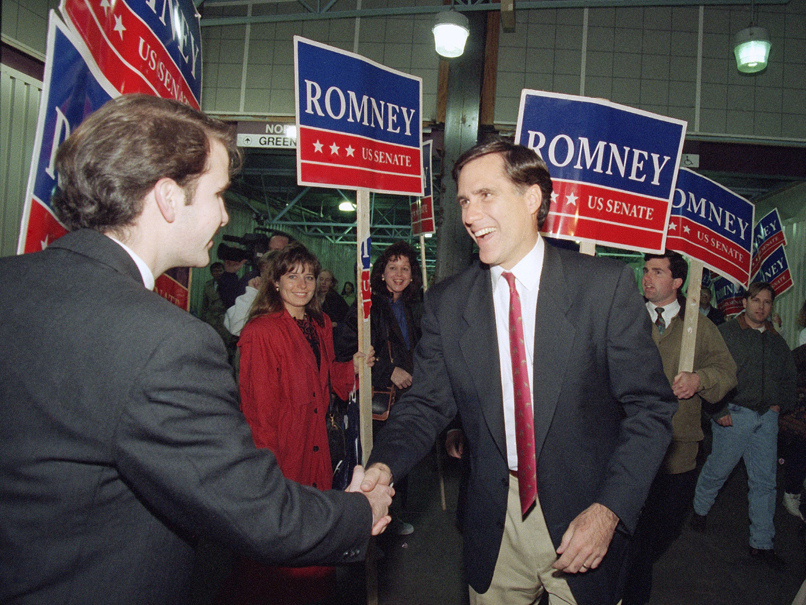 Then a Republican candidate for the U.S. Senate, Mitt Romney shakes the hand of a commuter while campaigning at North Station in Boston on Nov. 7, 1994.

Romney was a new face in the Republican Party, too. He changed his affiliation from independent in 1993. So he didn't have the party infrastructure to build a political machine comparable to Kennedy's.

Still, he put a couple of million dollars of his own money in the campaign fund. And by September, some polls showed the men tied. Then came an epic October debate that would define the election and reverberate through many subsequent ones.

"I've been watching elections for several decades of Massachusetts politics," Watanabe says. "That's probably one of the most memorable nights I've had."

Watanabe remembers a moment before the cameras and the audience were in place; the candidates were doing microphone checks.

"And Ted Kennedy showed up. His shirttail was out. He looked, frankly, to me, horrible. He looked like he wasn't ready for this," Watanabe remembers.

When the debate began, something changed. The clean-cut Romney came across as a novice, recalls Republican strategist Murphy.

"As a new candidate, he got up there — Ted Kennedy was the old pro — and really got roughed up in the debate," Murphy says.

On the stage in Boston's historic Faneuil Hall, the lion seemed to re-emerge. Kennedy hammered Romney on health care finances and on abortion.

"I have supported the Roe v. Wade [decision]. I am pro-choice," Kennedy said. "My opponent is multiple choice."

Romney replied with an answer that has dogged him ever since: "My mother and my family have been committed to the belief that we can believe as we want, but we will not force our beliefs on others on that matter. And you will not see me wavering on that, or be a multiple choice, thank you very much."

Later as governor, Romney changed his position — he now calls himself "pro-life."

Romney got creamed in the debate, and when Murphy joined Romney's gubernatorial campaign in 2002, the candidate was still absorbing those lessons.

"So a focus of our campaign for governor was to spend the time to prep and get comfortable with that format," Murphy says. "And by most observers, he won the debates decisively in the gubernatorial campaign. It's one of the reasons he won."

The Senate race against Kennedy was not a clash of ideologies. In a state where only 13 percent of voters called themselves Republicans, Romney worked hard to portray himself as a moderate.

"Look, I was an independent during the time of Reagan-Bush. I'm not trying to return to Reagan-Bush," Romney said then.

Instead of policy differences, Romney focused on personality differences. The Kennedy camp was far more aggressive. Attack ads from that time foreshadow a vulnerability that Romney's opponents use to this day. Kennedy painted Romney as a coldblooded capitalist willing to ruin people's lives for money.

"He's cut our wages to put money back into his pocket," a worker in one ad said. Another added: "You're not creating jobs — you're taking them away from us."

Striking factory workers from Indiana added to that portrayal. The workers went to Massachusetts and protested in front of Romney's company, Bain Capital, which owned the factory that laid off workers. Romney was on leave from Bain and had nothing to do with the decision, but the attacks worked. He dropped in the polls.

"I think he's clearly gotten over this notion that 'I run the risk that people won't like me.' You know, in a lot of respects, I think he sometimes goes out of his way to carpet-bomb an opponent," Ferson says.

Romney put that lesson a different way in an interview years later, when he said, "If fired upon, you return fire."

And he said he learned another lesson from that race: "And that is, if you don't define yourself, your opponent will do that for you."

In the end, the contest wasn't even close. Romney took 41 percent of the vote to Kennedy's 58 percent. Romney returned to Bain and then went on to run the Utah Winter Olympics.

Today on the stump he says he has spent very little of his life in politics. And that's true.

But it wasn't for lack of trying.

On Monday's All Things Considered, Scott Horsley looks at President Obama's loss in his first campaign.