Accessibility links
Bid For Congress Was Obama's Political Boot Camp A dozen years ago, Barack Obama ran an unsuccessful campaign for a U.S. House seat. Though his ambition proved no match for his opponent's experience, Obama honed his speaking style and cultivated relationships that would eventually help propel him to the White House. 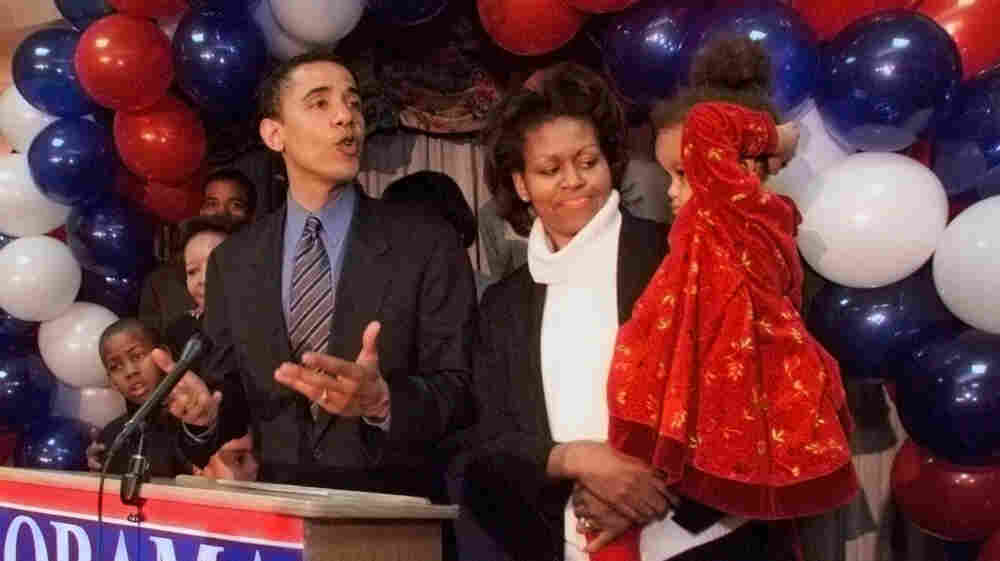 Barack Obama, then a Democratic candidate for a U.S. House seat, delivers his concession speech to supporters, while his wife, Michelle, tends to their daughter, Malia, on March 21, 2000, in Chicago. Frank Polich/AP hide caption 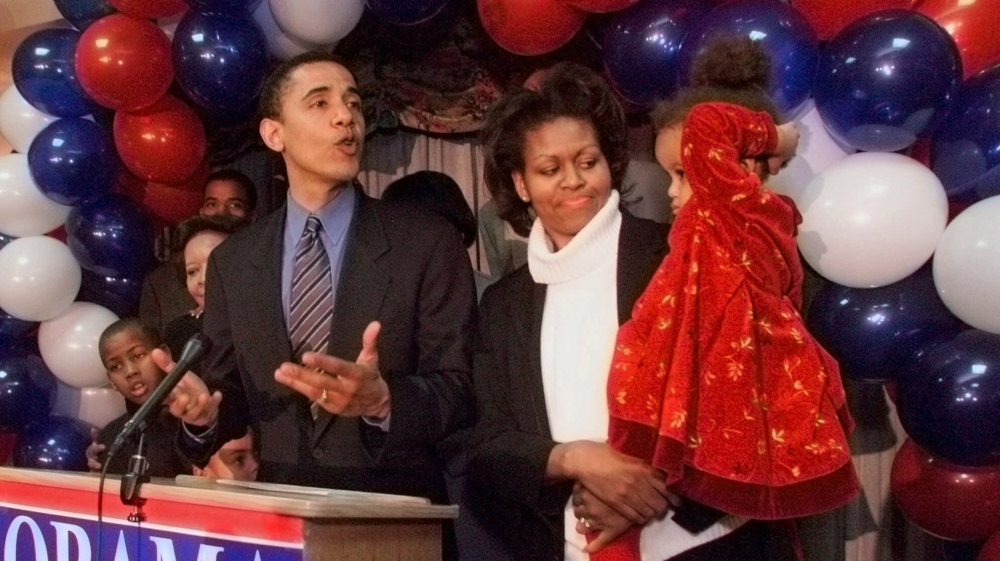 Barack Obama, then a Democratic candidate for a U.S. House seat, delivers his concession speech to supporters, while his wife, Michelle, tends to their daughter, Malia, on March 21, 2000, in Chicago.

From now until November, President Obama and GOP presidential candidate Mitt Romney will emphasize their differences. But the two men's lives actually coincide in a striking number of ways: Both attended Harvard. Both have been heavily influenced by their respective churches. Each descended from polygamists. And each man suffered early political setbacks. On Morning Edition, Ari Shapiro looked at Romney's loss in his 1994 Senate race for the first installment of NPR's "Parallel Lives" series. In the second part, a look at a campaign Obama lost.

A dozen years ago, Barack Obama was a young man in a hurry. He had served less than two full terms in the Illinois state Senate. But campaign manager Dan Shomon says Obama was already aiming higher.

"He had aspirations to be heard," Shomon recalls. "And in Springfield, when you're a state senator, you're even less important than a Chicago alderman."

Obama decided to challenge Democratic U.S. Rep. Bobby Rush in 2000. Rush had just lost his own bid for the Chicago mayor's office. But the onetime Black Panther turned civic activist was still popular in his South Side district.

"It's very difficult to knock off a black incumbent. Black voters are very loath to reject one of their own," Washington says. "So it took a lot of gumption and some hubris. ... And I think that that race knocked some of that hubris out of him. And he realized he had a lot to learn."

A Lack Of Experience

Obama's ambition proved no match for Rush's experience. The young state senator was little known outside his University of Chicago neighborhood. And he had a limited advertising budget to introduce himself. 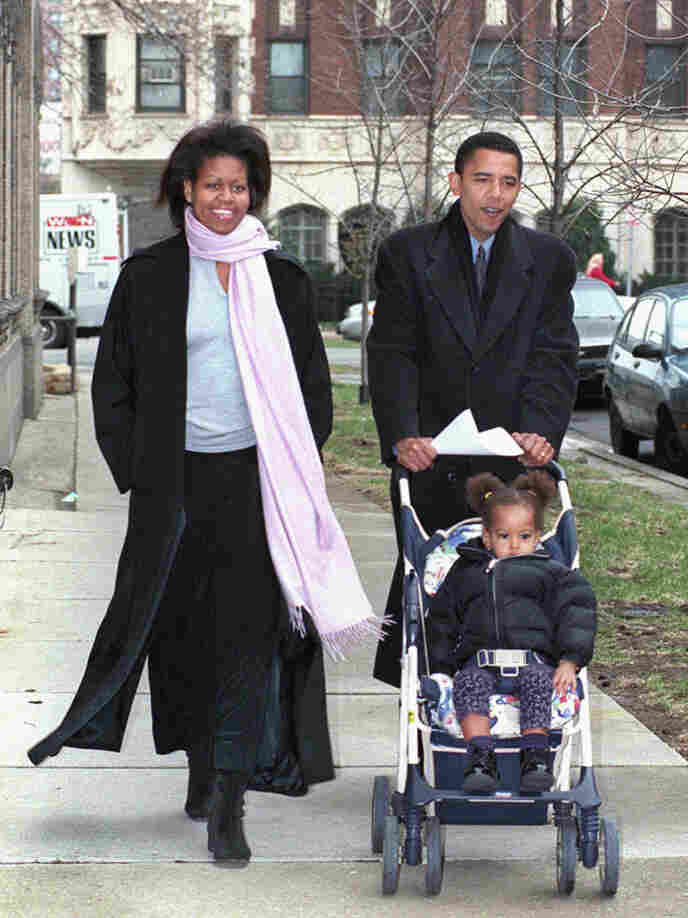 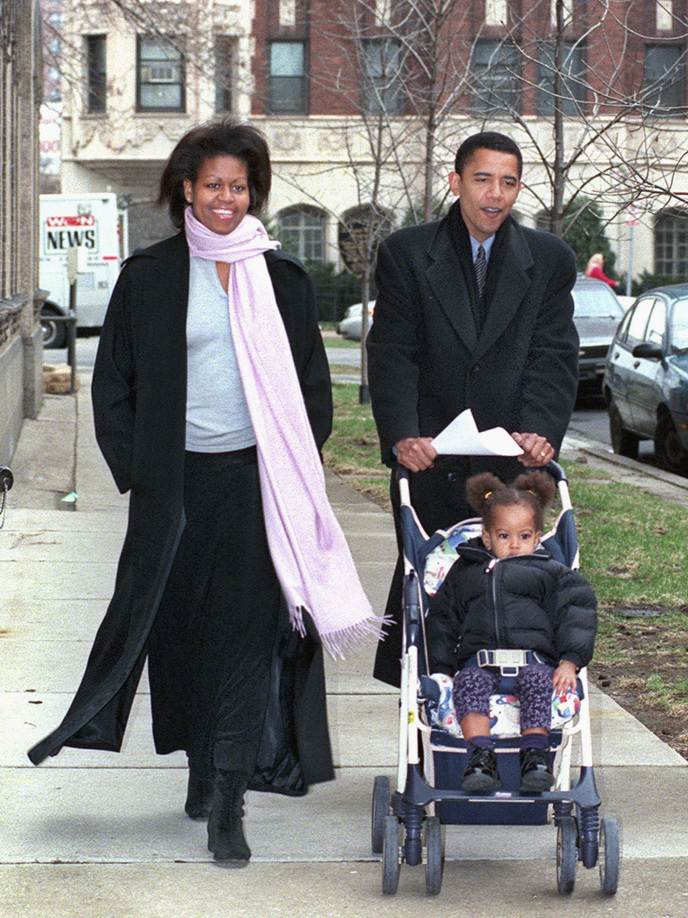 Inexpensive radio ads stressed his background as a community organizer — the work that originally brought Obama to Chicago. They also hinted at the priorities that would define his political career.

One ad opened with a woman frightened about her family's inability to afford health insurance. "One new leader is taking on the insurance industry with a bold plan," the ad said. "That leader is Illinois state Sen. Barack Obama."

With limited staff, Obama drove himself through unfamiliar neighborhoods, sometimes calling Shomon for directions late at night when he got lost. The congressional district was heavily African-American, but it also included the Irish Catholic neighborhood of Beverly, where Obama marched in what had been an all-white St. Patrick's Day parade.

"We were not allowed to have our own float, but Rep. [Thomas] Dart, who's now the sheriff of Cook County, invited us to be his guest," Shomon recalls. "So I gave then-Sen. Obama a green vest and I said, 'Wear this and then you'll be good.' He wouldn't do the O-apostrophe-Bama."

Obama had not yet discovered his family's Irish roots. He also hadn't discovered the speaking style that would later make him famous. Columnist Washington says to some African-American voters, Obama still sounded too much like the bright young law professor he was.

"Some people felt that he was sort of talking over people's heads," Washington says. "And I remember folks talking about the way he dressed and the way he carried himself and the fact that he'd gone to Harvard. And I think Bobby Rush was very effective at using that against him. He was sort of perceived as not one of us."

'A Bump In The Road'

Obama wrote later it was a race in which everything that could go wrong did. And his own mistakes were compounded by tragedy. Rush's adult son was shot and killed by drug dealers, causing a wave of sympathy for the incumbent congressman.

Later, Shomon says, Obama missed a high-profile vote on a gun bill in the state Senate when his daughter got sick during a family trip to Hawaii.

"It really was a meaningless vote," Shomon says. "But it caused us to have to explain to everyone. And whenever you're explaining and you're on defense, you're not winning a campaign."

Obama lost by a 2-to-1 margin. Years later, the defeat still burned.

"That race was probably my last involvement in vanity politics," he said. "Since that time I had to really look into myself and say, 'Why am I doing this? Is it to get attention or is it to help people?' "

Even in losing, though, Obama was impressive. Political writers downplayed the loss as a "bump in the road," rather than a dead end. Shomon says many still saw the young politician as destined for higher office.

"In that race in 2000, a couple people said that — you know, 'This guy is going to be the first black president of the United States.' And we kind of would laugh about it and say, 'Look, he can't even get elected to Congress,' " Shomon says.

In politics, Obama wrote, there is no second place. But there are second acts. And his was just beginning.

His speaking style evolved as he visited hundreds of churches during the campaign. And he also proved he could win votes in a variety of neighborhoods, including that Irish Catholic community where he celebrated St. Patrick's Day.

With his white mother and African father, Obama had a gift for moving comfortably in lots of different circles. Washington, the political columnist, says it was during the 2000 race that others began to see that potential.

"Folks with money, people that normally wouldn't be involved in a congressional race on the South Side of Chicago," she says. "And he cultivated those relationships and took them with him all the way to the White House."

Shomon suspects Obama never would have made it that far had he beaten Rush a dozen years ago. "Think about the course of history. If he had won that race, he would have been a backbencher among 435 members of Congress. He would have been the most junior African-American congressman from Illinois."

Shomon calls the unsuccessful 2000 campaign a political boot camp for Obama. He came into the contest ill-prepared. But he came out battle ready for all the elections to come.