Accessibility links
For A Third Time, Putin Returns As Russia's President Vladimir Putin was sworn in Monday for a six-year term as president of Russia. In his inauguration speech, Putin said he was committed to democracy. But anti-Putin activists are not convinced and staged protests on the streets of Moscow. 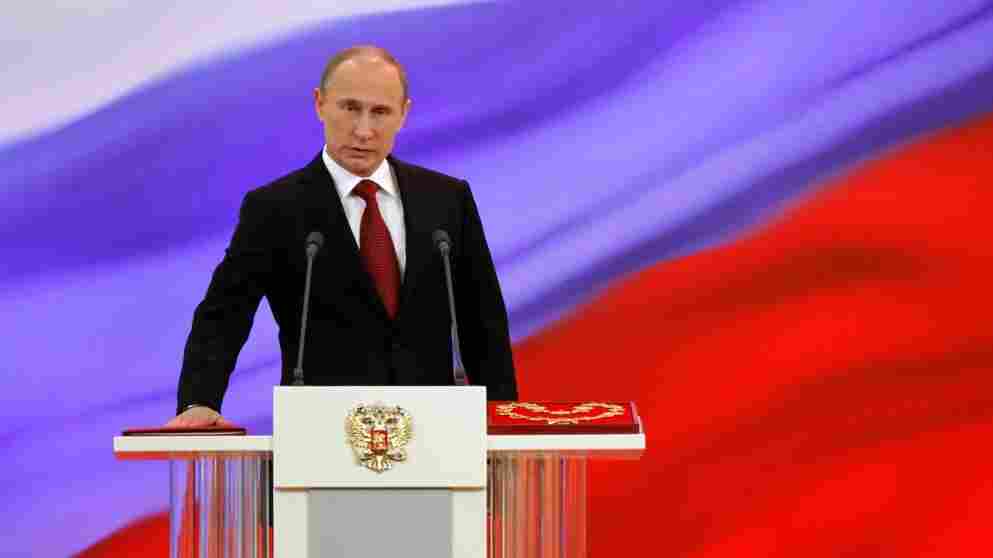 Vladimir Putin takes the oath of office during his inauguration as Russia's president at the Grand Kremlin Palace in Moscow on Monday. Putin will be serving his third term as president, after four years as prime minister and two previous presidential terms. Dmitry Astakhov,/AP hide caption 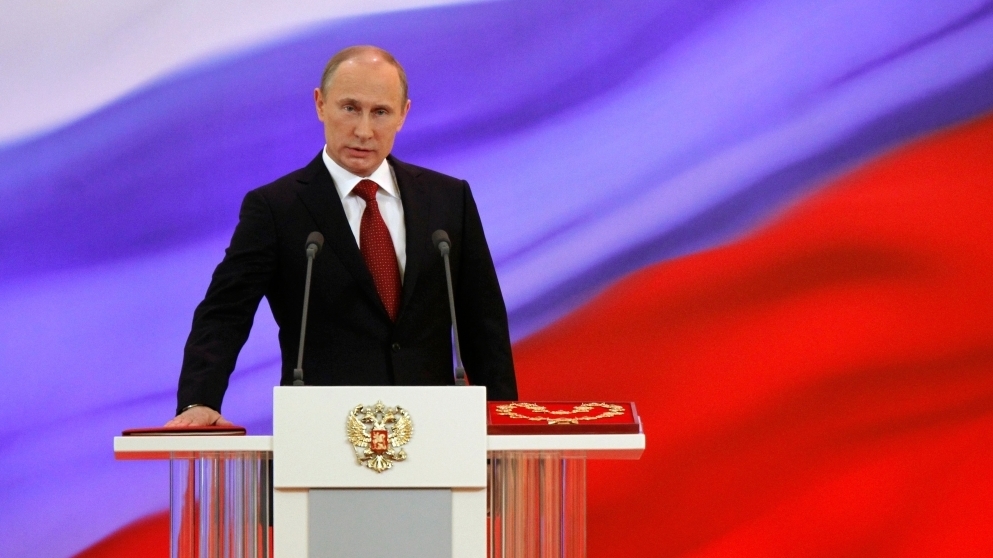 Vladimir Putin takes the oath of office during his inauguration as Russia's president at the Grand Kremlin Palace in Moscow on Monday. Putin will be serving his third term as president, after four years as prime minister and two previous presidential terms.

Vladimir Putin is once again the president of Russia.

Putin, who held the job from 2000 to 2008, spent the past four years as prime minister because the Russian Constitution prohibits a third consecutive term.

So his hand-picked successor, Dmitry Medvedev, held the office for the past four years. Now they are switching places, with Putin returning as president and Medvedev tapped to be the prime minister.

Putin's inauguration took place Monday in the ornate halls of the Kremlin. In a speech, he said he was committed to democracy and constitutional rights — just the areas where those who have taken to recent street protests believe Putin comes up short.

The inauguration ceremony was brief, and after Putin took the oath of office with his hand on the Russian Constitution, his speech to the nation was also unusually short, just about five minutes. 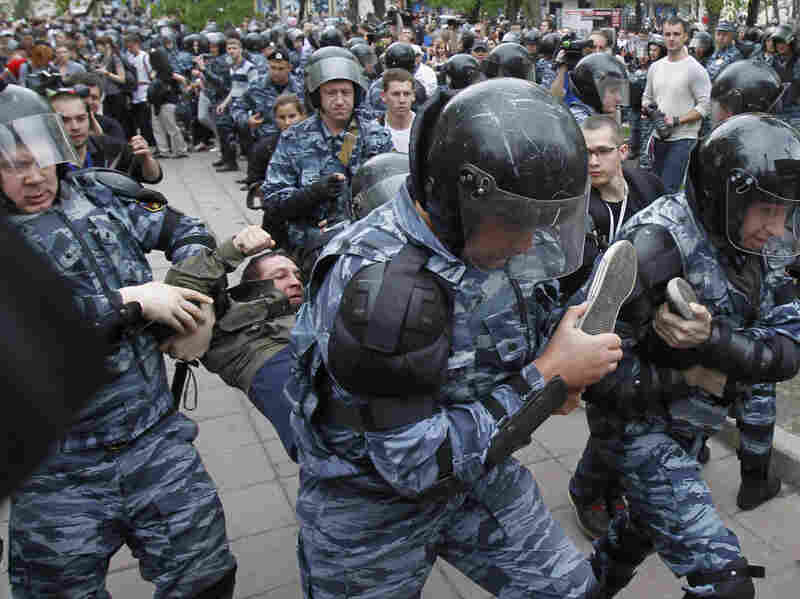 Riot police detain an opposition supporter during an anti-Putin protest in Moscow on Monday. Tens of thousands of people — mostly young Russians — turned out in protest against Putin on Sunday and Monday. Denis Sinyakov/Reuters /Landov hide caption 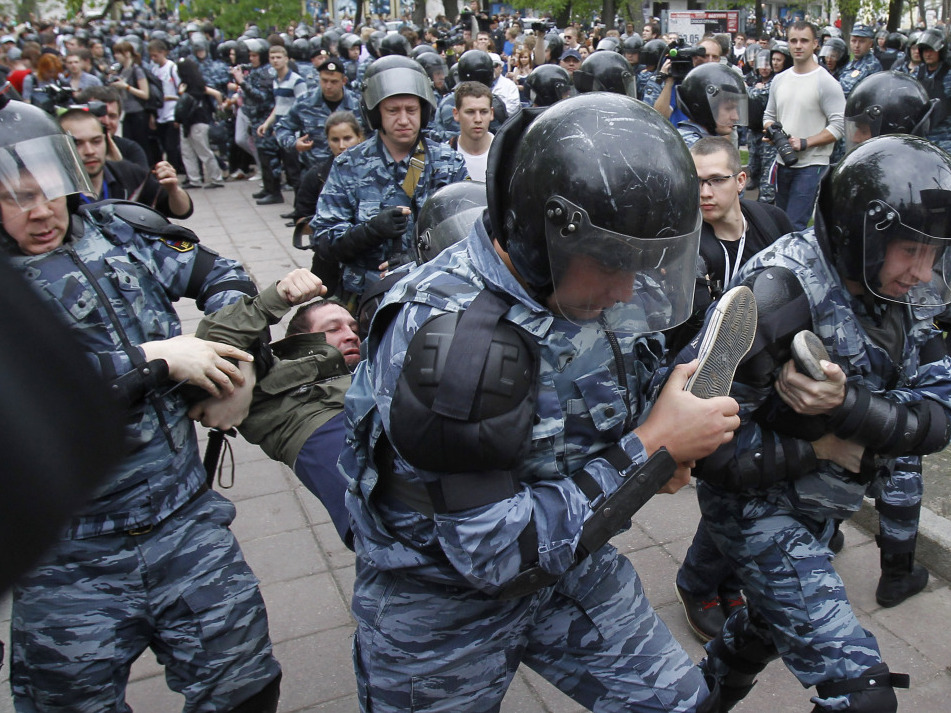 Riot police detain an opposition supporter during an anti-Putin protest in Moscow on Monday. Tens of thousands of people — mostly young Russians — turned out in protest against Putin on Sunday and Monday.

Now with the president's term lengthened to six years, he will hold the office until 2018, with a possible run for yet another term after that.

That could amount to a quarter century with Putin in power. Perhaps he had that in mind when he observed during his speech that it is "the meaning of my whole life and my obligation to serve my fatherland and our people."

"We have passed a long and difficult road together," Putin said. "We now feel confident. We have made our country stronger. We restored our dignity as a great nation. The world now sees a restored Russia."

Putin said recently that the past 12 years have seen Russia's post-Soviet period come to an end. Indeed, millions of Russians were born after the end of the Soviet Union.

Now, Putin said, we have everything we need to move forward and create a dynamic state with a stable economy, and an active and responsible civil society. "We want to live in a democratic country, and we will, where each person has freedom and opportunity to use his talents and energy," Putin said. "We will live in a successful Russia which will be respected in the world as an open and predictable partner."

But it is on just the issue of how committed Putin is to building a real democracy in Russia that it seems he is most vulnerable.

Some 20,000 protesters took to the streets near the Kremlin on Sunday to voice their belief that Putin is hardly committed to democracy.

Street protests — dominated by the young — erupted late last year. In Sunday's demonstration, easily three-quarters of the participants were in their teens or 20s.

The marchers demanded a clean government in Russia, without Putin, and for most of the afternoon, the demonstration remained peaceful. That's exactly what most of the marchers expected, like 21-year-old Olga, who declined to give her last name.

"I don't want a revolution. I want just some peaceful change of the political situation," she said.

Since the street protests began, they have been peaceful, but Sunday, thousands of riot police were deployed around the march.

Late in the day, skirmishes broke out between the police and more militant elements of the crowd after the police detained three of the movement's leaders who were scheduled to speak.

The police ended up arresting more than 400, handling many roughly.

It was the kind of scene that encouraged critics of the protesters, such as Peter Lavelle, a pro-Putin commentator for Russia Today, the Russian government's English-language satellite TV channel. He called Putin's victory a landslide by any measure.

"Vladimir Putin is genuinely popular in this country. Seeing the protesters yesterday, they're the most undemocratic elements in Russia today because they do not agree with the outcome of the election," Lavelle said.

The protesters, however, believe the election was tainted by ballot rigging.