Accessibility links
Part 4: Long-Term-Care Insurance: Who Needs It? As the nation's roughly 78 million baby boomers move into old age, the need for long-term care will soar. But when it comes to long-term-care insurance, relatively few sign up. The policies can be expensive and some big insurance companies have stopped offering them.

An Expert Weighs In

Waiting To Buy Long-Term-Care Insurance Adds Up May 9, 2012

Americans routinely buy all sorts of insurance — for cars, homes, health and even pets and boats.

Geneva Hunter, 66, is among those without protection. She is well aware of how helpful it would be to have such insurance. She gets schooled on that point each day: Her 89-year-old mother, Ida Christian, who has Alzheimer's disease, lives with her.

"I do not have [the insurance] because at the time it was offered [through my company], I could not afford it and take care of my mother at the same time," said Hunter, a member of one of three families being profiled by NPR in a series called Family Matters: The Money Squeeze. 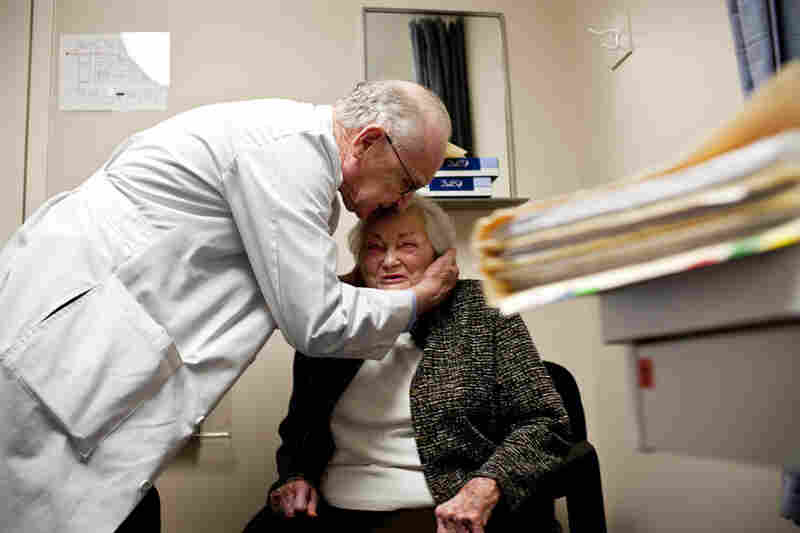 AnnaBelle Bowers' long-time physician, Walter Watkin, gives her a kiss on the forehead at the end of her visit. When asked how long she had been coming to see him, he said, "Long enough for her file to be 2 inches thick." Kainaz Amaria/NPR hide caption 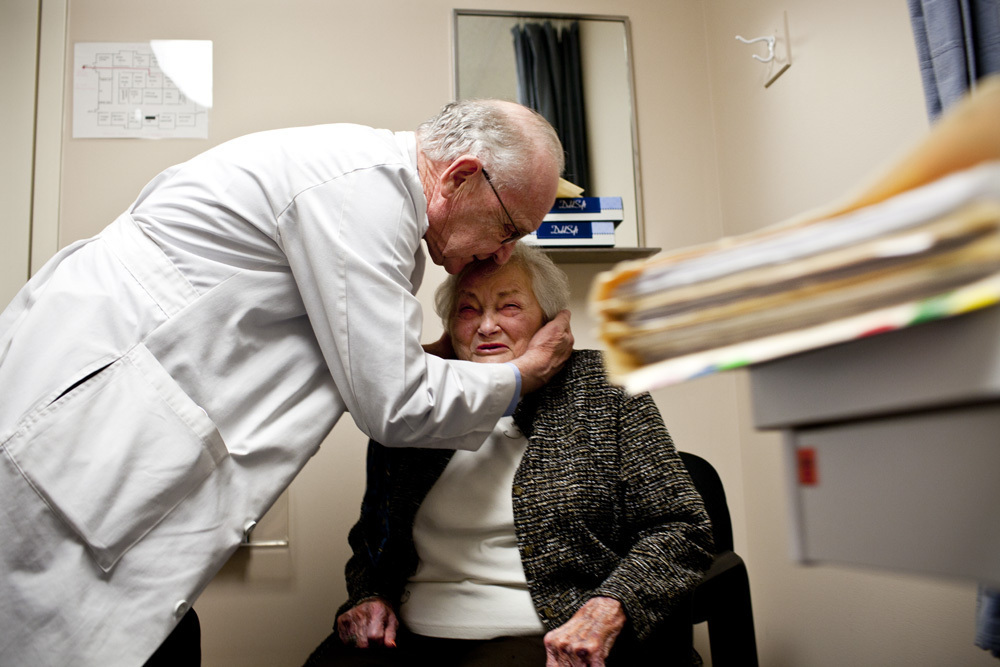 AnnaBelle Bowers' long-time physician, Walter Watkin, gives her a kiss on the forehead at the end of her visit. When asked how long she had been coming to see him, he said, "Long enough for her file to be 2 inches thick."

"I think it was close to $400 a month," Hunter said. "That's a lot of money when you are caring for somebody else."

But with each passing birthday, Hunter feels more pressure to buy insurance. "I know it's expensive, but I have to do it," she says, because she fears becoming a financial burden to her daughter.

Many Americans share that financial goal: to not burden others. But the reality is that each year, an estimated 11 million U.S. adults need some type of long-term care.

Information On Long-Term Care And Insurance

Read more about long-term care, including tips on planning and paying for it, at the National Clearinghouse for Long-Term Care, developed by the U.S. Department of Health and Human Resources. The site also includes information on long-term-care insurance.

Such care can be crushingly expensive: Just one hour of home-health-aide care costs roughly $20, while the average private nursing home room costs $87,000 a year. Neither routine employer-based medical insurance nor Medicare will pay for extended periods of custodial care.

Scott Hawkins, 46, and a member of another family in the NPR series, says he hasn't yet explored getting long-term-care insurance. In fact, future elder-care costs are so daunting that only humor can help defuse the ticking financial bomb.

"Our youngest daughter [Carley] is a little bit of a comedian and she made the comment one time to us, 'Hey, when you guys get old, don't worry about it' — and we were thinking she is going to say something nice," he said. Instead, she suggested her parents plan on living with their older daughter, Chelsea, who is studying to be a pharmacist.

Scott recalls Carley joking that he would "eat better if you live at Chelsea's house because she'll be making twice as much money as I make being a schoolteacher!"

For the nation's roughly 78 million baby boomers, the time for humor about who will prepare their meals is quickly running out. Many boomers, people born between 1946 and 1964, are expected to fall so far into poverty trying to provide themselves with paid care that they will qualify for Medicaid — the medical care program for the deeply impoverished.

A fortunate few will have long-term-care insurance, but even that option is looking sketchy as more companies exit the business. Insurance giants such as Prudential and MetLife have recently pulled back from offering long-term-care policies. Others, such as John Hancock and Genworth Financial, have turned to state regulators, seeking permission to dramatically hike premiums. Depending upon the location, the insurers' requests for higher rates have been for amounts such as 18 percent or 40 percent or, in a few cases, 90 percent.

Here are answers to some common questions about long-term-care insurance.

What is long-term-care insurance?

This type of policy covers basic daily needs over an extended time. While health care insurance or Medicare helps pay for immediate medical expenses, say, a surgeon's bill, long-term-care insurance helps people cope with the cost of chronic illnesses, such as Alzheimer's disease, or various disabilities. The policies pay for assistance with everything from the basics — bathing and dressing — to skilled care from therapists and nurses for months or even years.

Do you have to be in an institution to collect your benefits?

Long-term-care insurance typically covers out-of-pocket expenses that come with home care, assisted living and nursing homes. Most policies have a waiting period that works like a deductible. So if you need the help of a home-nursing aide, you may have to wait 90 or 120 days before your benefits start to cover those costs.

How much does insurance cost?

The American Association for Long-Term Care Insurance says people should expect to pay an average of $3,335 per year to cover a couple of healthy 60-year-olds on a plan that pays out a $150 daily benefit for up to three years. But prices can vary dramatically, depending upon factors such as the purchasers' age, the level of inflation-adjustment protection and whether the daily benefit will be $100, or some larger amount, say, $150 or $200.

Compare the costs and coverage offered in a sampling of long-term-care insurance policies.

Why is the coverage so expensive?

The premiums are high and rising because providing long-term care can be so risky for the insurer. In contrast, the potential claim on an insured home can be reasonably estimated. If a $100,000 home is burned to the ground, the claim would reflect that amount. But predicting how much care a person might need — and for how long — is not easy.

These days, policies typically are capped at three years because open-ended plans have proved too risky for the insurer. The insurance association points to the case of a woman who purchased coverage at age 43. For three years, she paid her annual premium of $881. Then, she needed care, so she stopped paying premiums and initiated her claim. Her care lasted 15 years and cost the insurer $1.7 million, the association said.

When should you get the insurance?

It's cheaper when you sign up by age 60. You have to be medically healthy to qualify. But, like auto insurance, a policy generally has no "surrender" value. That is, if you never have an auto accident, then all the money you spent on car insurance is gone forever. Typically, that's how it works with long-term-care insurance; i.e., you may pay and pay — and never get back a penny if you don't medically qualify for care.

Also, some people pay their premiums for years, and then get hit with rate hikes they can't afford. They then face the tough decision of dropping their policies — and losing any chance of collecting benefits — or trying to struggle on, paying higher rates or accepting lower benefits, such as less inflation-adjustment protection.

Is it worth buying?

Experts say the insurance can be a huge help, especially for people without children and relatively small retirement savings. But it's far from a perfect solution to all problems. For example, a policy typically covers three years of care, but many people live long beyond that cap. And the new policies are being written with more restrictions to limit insurers' risks.

Whether it makes sense to spend so much money on premiums, rather than focus on building up a retirement savings account, is a complicated equation that requires serious study.