Accessibility links
A Daughter With Down Syndrome Is The Perfect Sister When Kelle Hampton's second daughter was born with Down syndrome, she grieved for the sisterly bond she thought would be robbed from her older daughter. But she quickly discovered that the girls' love for each other was strong. 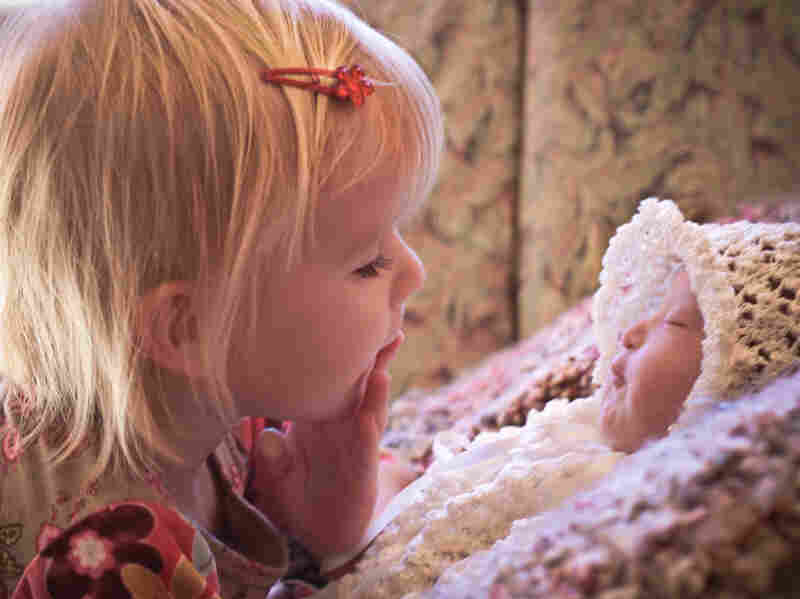 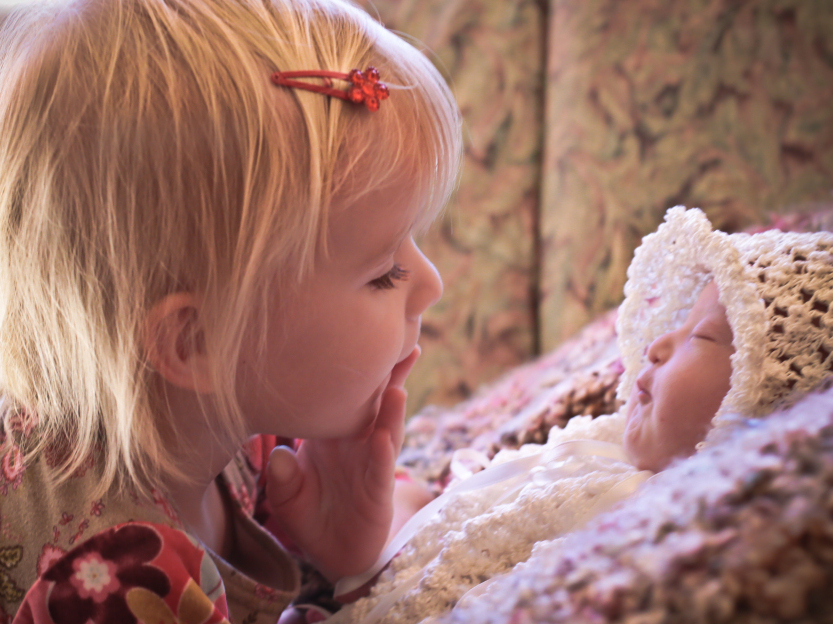 Kelle Hampton's daughter, Lainey, loved her little sister, Nella, before she even met her.

Kelle Hampton is the author of the memoir Bloom: Finding Beauty in the Unexpected.

"See that right there?" the obstetrician asked as she glided the sonogram wand across my middle and pointed to a blurry image on the monitor. "It's a girl," she announced.

A girl — that meant a sister for my daughter, Lainey, which, according to my life plan, put me somewhere right near "exactly how it's supposed to go." Sisters. I anticipated their friendship the last months of my pregnancy just as much as I looked forward to my first inhalations of newborn skin. After all, I have a sister. I know the value that kinship added to my life, and I was certain that, along with a real-life baby doll to feed and dress up, I was giving my older daughter a greater gift — a best friend.

So when the doctor told me an hour after our little sister slipped into the world that Nella had Down syndrome, there were two waves of grief that followed. The first wave was for myself and all that I had hoped for, and the second, perhaps even deeper, was for the bond of sisterhood I had excitedly awaited for my girl. It faded into the blur of things we'll never know. 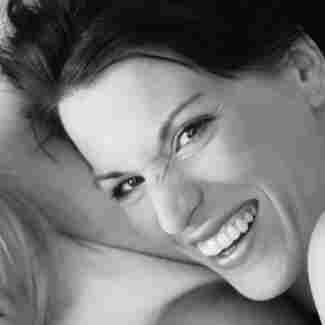 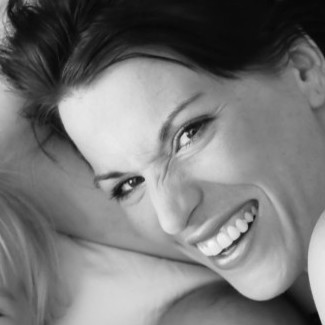 Kelle Hampton's memoir is Bloom: Finding Beauty in the Unexpected.

I unraveled hopes those first few nights, pulled out all the things I loved about having a sister and grieved the loss of each one for my girls. Things like calling four times a day, trading recipes for stuffed green pepper soup, laughing about when we know we're right and Mom's wrong, asking advice for teething remedies and 2 year-old fits.

And what would my girls' childhood look like? Would they fight over clothes and build secret forts in their closets?

While I cannot be certain what the future holds based on the span of two years, I can say that my 4-year-old daughter and her 2-year-old little sister have exactly what I had hoped for — a unique companionship and all the things my sister and I shared so many years ago. I have found my girls hidden under secret closet forts and have negotiated many crying fits over dolls and crayons and the last M&M.

Looking back I realize it was my sister who offered me my first bit of hope when she showed up at the hospital the day after Nella was born. The first to welcome her without any grief or apology. She held Nella close.

"She's beautiful," she exclaimed. Sensing my own doubts for what my girls would share, my sister continued: "Kelle, there's always a plus side. Lainey might not call Nella for her chicken casserole recipe, but she'll be changed in ways she wouldn't be otherwise."

You see, the best part about sisters is that they are mirrors in which we see ourselves, offering us more hope and compassion than we are sometimes able to give. Bonded by genetics and united by a shared past, my girls will have everything they need: each other.