Accessibility links
An Inside Look At Sendak's 'Wonderful Magic' Wicked author Gregory Maguire considered Maurice Sendak, who died Tuesday at age 83, a personal mentor. He says Sendak's books were magical — "the more you look at them, the less you understand how they do what they do." Maguire talks about his memories of the Where the Wild Things Are author. 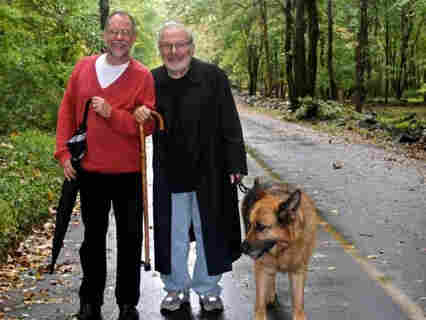 Besides his influence on generations of children and adults, author Maurice Sendak was also a personal mentor to a number of writers. Sendak, who died Tuesday at age 83, told NPR in 2005 that he felt it was his duty to pass on everything he'd learned.

Among his mentees was Gregory Maguire, the author of Wicked, a number of children's books and Making Mischief: A Maurice Sendak Appreciation.

Maguire tells Melissa Block, host of All Things Considered, that he visited the Where the Wild Things Are author in the hospital shortly before he died and brought a photo of Lewis Carroll. In the image, the Alice In Wonderland creator is seen sitting on the edge of a window with his feet hanging outside.

Maguire says Sendak felt a deep connection to Carroll and other authors who had come before him, including Emily Dickinson, Henry James and Homer.

"He felt that they were his friends and part of his family," Maguire says. "I brought Lewis Carroll so I could say, 'Lewis Carroll is over there — he's on the other side of the glass, Maurice. He's ready to welcome you so that you can lean down and be a family member. You're gone, [but] your books aren't gone, your influence isn't gone. Make sure to come back and haunt us."

On Sendak as his mentor:
"I remember having lunch with him once in South Hadley, Mass., and he said: 'Gregory, if you ever sell out, I will come back from the grave and I will sit at the edge of your bed and I will taunt you. You remember, children are the most important thing — you keep their welfare at the heart of everything that you do. Or I will come back.' So now I'm tempted to tease him — to see, will you really, Maurice? I would love to see you again, how can I get you back?"

On his relationship with children:
"He loved children because they are a pure repository of the human spirit. ... He wrote books that were published for children, but anybody who read them when they were young, found that unlike most other books, they were not put aside in the attic as one grew older. The books that I'd read of his when I was 8 and 10 and 12, maybe, seemed actually to say more to me the older that I got. They are real works of art, because the more you look at them, the less you understand how they do what they do — that wonderful magic."

On his writing:
"He was a poet of comedy and a poet of transformations — all his stories are about children transforming themselves out of the gloom of difficult circumstances into, maybe not paradise, maybe not salvation, but into a slightly better situation where they could take the next meal and maybe move onto the next hurdle."