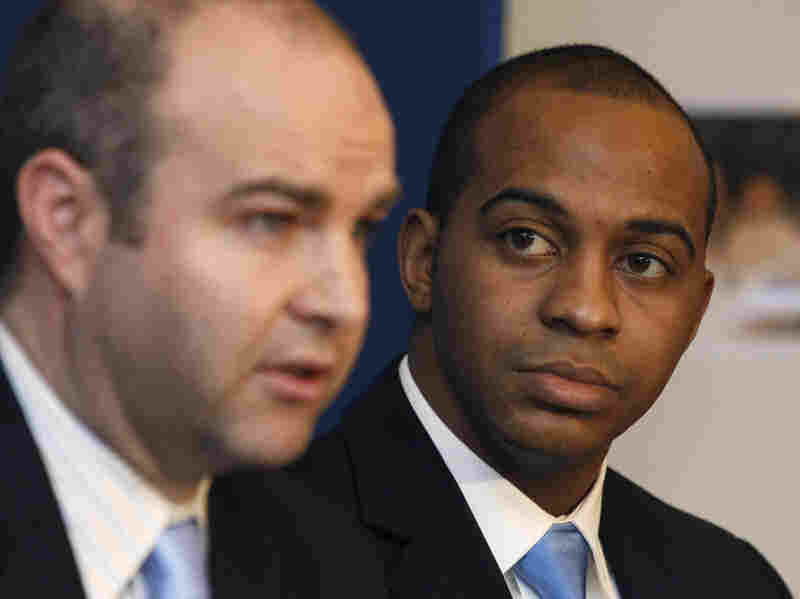 Attorney William T. Gibbs (left), and Tregg Duerson, son of former Chicago Bears player Dave Duerson, announce the filing of a wrongful death lawsuit against the NFL on Feb. 23 in Chicago. The lawsuit accuses the NFL of negligently causing the brain damage that led Duerson to take his own life at 50, by not warning him of the negative effects of concussions. Charles Rex Arbogast/AP hide caption 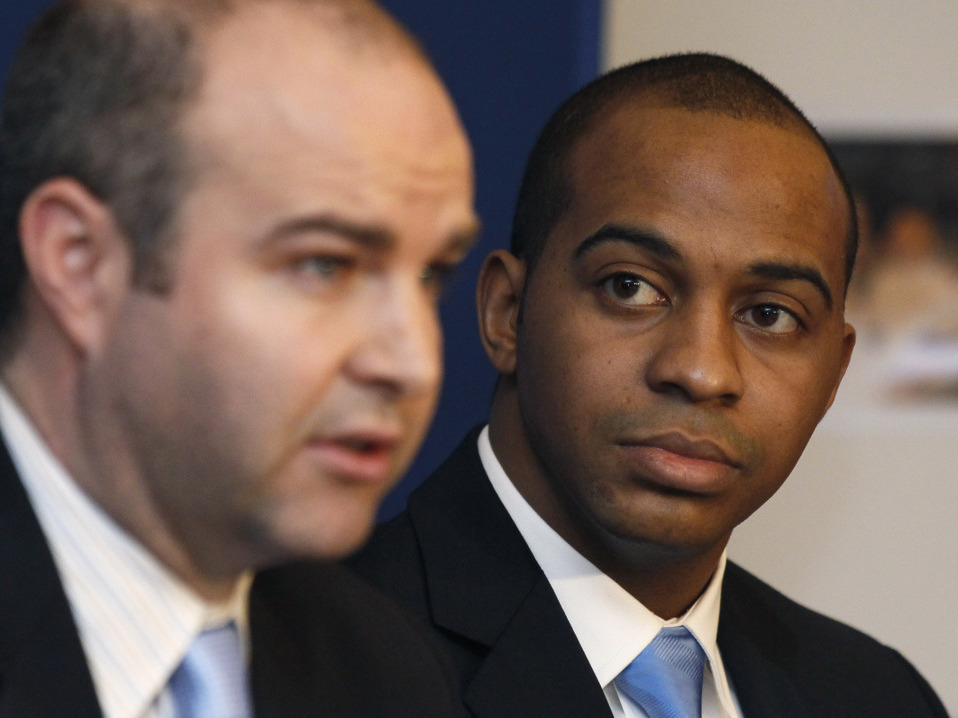 Attorney William T. Gibbs (left), and Tregg Duerson, son of former Chicago Bears player Dave Duerson, announce the filing of a wrongful death lawsuit against the NFL on Feb. 23 in Chicago. The lawsuit accuses the NFL of negligently causing the brain damage that led Duerson to take his own life at 50, by not warning him of the negative effects of concussions.

Even as the great, sad Junior Seau killed himself, more and more other old football players are joining in class action to sue the National Football League. They're claiming, generally, that while the NFL understood — for years — how vulnerable its players were to head injuries, the league did not sufficiently warn players about the danger of concussions.

Nor did the teams first do no harm — instead, allowing players to go back into games when they should have been kept out of the action.

The league, of course, is backpedaling furiously to try to show that it now stands foursquare behind safety even, undeniably, as the players get faster and bigger and therefore more liable to concussions all the time. Like it or not, that is the nature of the game we Americans so love.

Just the other day I was talking to an old player, one of those thousand or so who are suing the league, and he told me two things: No. 1, he always would've rather hit another player than score a touchdown. Aha, but this too: that even though he personally is all busted up with a body he estimates is 20 years older than his actual age, if he had it all to do over again, he would do it all over again.

That's football. But here is that larger truth so many people are avoiding: It's not just NFL football that is dangerous. If professional players, through the years, have suffered injuries — especially to their brains — players have also suffered football concussions in college, in high school and all the way down to youth football. In fact, of the nearly 5 million adolescents playing football below the college level, it's estimated that half have sustained concussions, a third of them on multiple occasions — and the human brain is not fully developed until the mid-20s.

Oh, this too from that player who would do it all over again: He will not let his sons play the game he loves. How many other fathers and mothers are coming to the same conclusion?

So never mind the NFL. When do lawsuits begin to pop up on those younger levels?

The very brutal nature of football is what makes it so uniquely popular to Americans, but how can you distill the violence from the game and sustain its enchantment? And if it remains so dangerous a sport — never mind liability — when will we reach a point, ethically, compassionately, when some major school, some conference, some high school association is the first to say: We're sorry, but as much as we love to watch football, we can't any longer countenance putting our boys in jeopardy, playing this brain game for our vicarious amusement?

The more we learn about head injuries, the more it seems that football is becoming like bullfighting. Only the bulls are young men.