Accessibility links
Foreclosure Review Is Free, But Few Borrowers Apply It's been two years since the "robo-signing" scandal revealed systemic problems among home foreclosures around the country. Regulators and 14 mortgage companies have established a review process to check individual cases for errors, but fewer than 4 percent of eligible homeowners have applied. 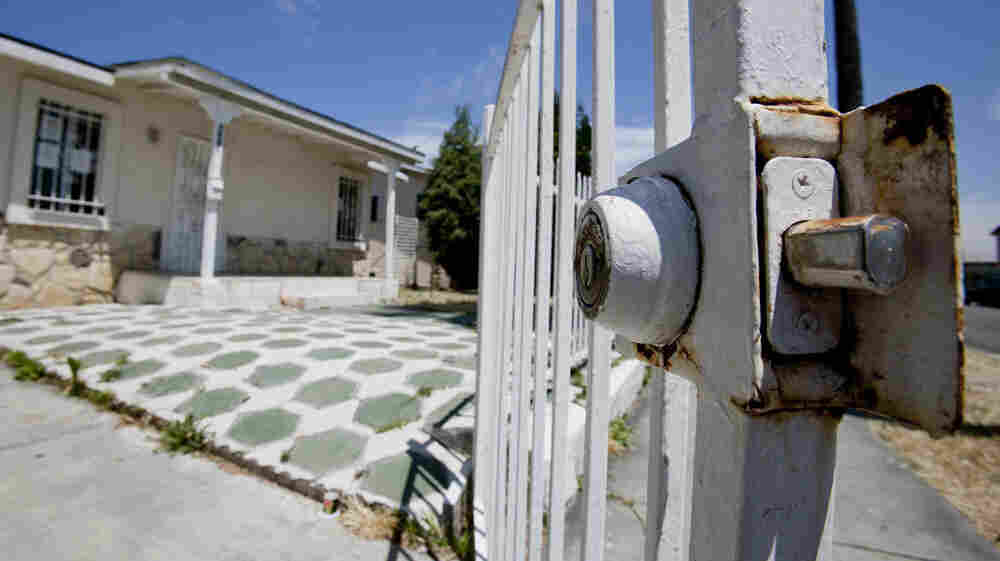 A foreclosed home in Los Angeles. More than 4 million homeowners nationwide are eligible for an independent review of their foreclosure process, but only a small percentage have applied to the program. Damian Dovarganes/AP hide caption

It's been more than six months since government regulators and banks first extended an offer to 4.3 million homeowners facing foreclosure: to review, at no cost, the foreclosure process to check for any possible errors or misrepresentations.

Homeowners stand to collect compensation of as much as $100,000 if errors are found. But thus far, only a tiny percentage of those eligible have signed up.

'Not Enough Folks Have Signed Up'

The push for a review process was set in motion by the "robo-signing" scandal. In 2010, several banks admitted mishandling some foreclosure documents. Some borrowers may have wrongfully lost their homes as a result, and the scandal exposed systemic problems in the foreclosure process.

Who Qualifies For A Foreclosure Review?

To be eligible for a review under the Independent Foreclosure Review program, borrowers must meet the following criteria:

Source: Office of the Comptroller of the Currency, www.independentforclosurereview.com

In the wake of the scandal, federal bank regulators required 14 mortgage companies to establish the Independent Foreclosure Review process.

The review costs homeowners nothing, but at last count, only 165,000 people — fewer than 4 percent of those eligible — have applied.

The original April 30 deadline has since been extended to July 31.

Last month, Housing and Urban Development Secretary Shaun Donovan tried enlisting a group of housing counselors to get more homeowners to sign up for the review.

"I am concerned that not enough folks have signed up, and that we're going to waste that opportunity," Donovan said.

Donovan says the process presents the first real opportunity for most troubled homeowners to get an independent read on whether their case was — or is — being handled appropriately.

"Consumers are tired of listening to folks who are promising them they'll help them, and all they do is charge fees," Taylor says. "There are tons of scammers out there."

Like so many other things having to do with foreclosures, Taylor says the Independent Foreclosure Review program is fraught with challenges and complications.

He says most borrowers avoid direct mail, and many no longer even live at their old address. In addition, Taylor says the official program website, which bears no official government logos, looks untrustworthy.

And, he says, it took the banks more than six months to send the letters to those who qualified — giving homeowners less time to respond.

"It doesn't really connote a genuine commitment to really helping the amount of people who could have been, and may have been, abused in this process," Taylor says.

"The response rate is really not our focus," says Bryan Hubbard, spokesman for the Office of the Comptroller of the Currency, one of the federal agencies administering the program. The government, he says, cannot force people to take advantage of the program.

Interactive Map: Foreclosures In Your County

The marketing effort, paid for by the banks, includes three rounds of print advertising in different languages. Separately, the government has run public service announcements in small publications and on 6,500 radio stations around the country.

Hubbard says some homeowners' cases may be reviewed, even if they don't apply. A sampling of foreclosure cases are being pulled from the banks' records to be scanned for mistakes.

Paul Leonard, a senior vice president at the Financial Services Roundtable, which represents the participating lenders, says cynics may think the banks have little incentive to get the word out, but says that's simply not the case.

"Virtually everyone involved in this wants to do it right," he says.

In the coming weeks, regulators will release guidelines for how much homeowners with legitimate grievances should receive in compensation.

Restitution payments will range from several hundred dollars to more than $100,000 for the gravest errors. The funds are separate from the $25 billion national bank settlement announced earlier this year.