Accessibility links
Government Job Cuts Threaten Black Middle Class Public sector jobs, with their competitive pay and benefits, have long been considered the most secure form of employment in America. But as government shrinks, data show African-American workers are bearing the worst of the cuts. 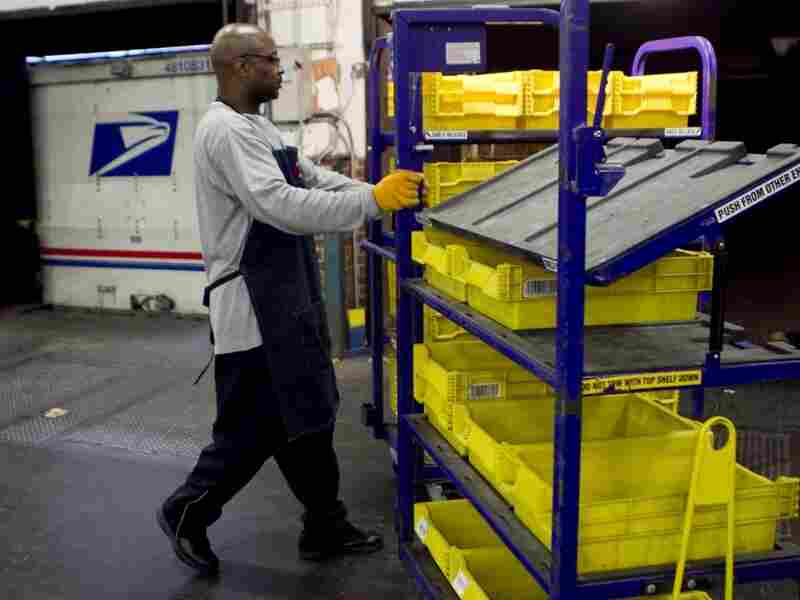 An employee loads flat trays onto a truck at the U.S. Postal Service processing and distribution center in Merrifield, Va. The USPS, which is projecting a $14.1 billion loss this fiscal year, is discussing restructuring options with potential advisers. Andrew Harrier/Bloomberg via Getty Images hide caption 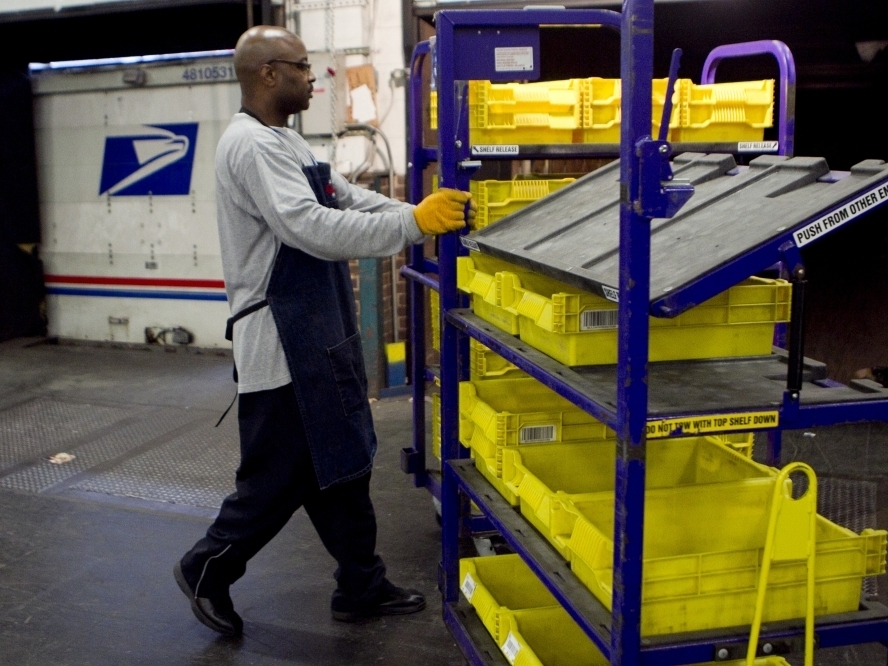 An employee loads flat trays onto a truck at the U.S. Postal Service processing and distribution center in Merrifield, Va. The USPS, which is projecting a $14.1 billion loss this fiscal year, is discussing restructuring options with potential advisers.

The planned downsizing of the U.S. Postal Service, which wants to shed thousands of jobs and reduce hours at post offices, struck Baltimore native Eric Easter at his core.

For him, it will mark the end of an era in which a post office job has meant stability and a path to a better life, as it did for him and his six siblings living in public housing in the 1960s.

"You hate to see that disappear," says the 49-year-old Easter, now a documentary filmmaker and producer, who describes his mother's hiring at the post office as a defining moment in his childhood.

"It meant moving to a nicer neighborhood, sort of establishing that I have a place in the world," Easter says. "I remember my mom having cocktail parties, and she and her co-workers could hold their heads up among teachers and other folks as people who had taken solid positions in the middle class."

Rivaled only by the manufacturing industry, postal and other government jobs built the modern black middle class.

Blacks are 30 percent more likely than nonblacks to work in the public sector, according to the University of California, Berkeley's Center for Labor Research and Education. And roughly 21 percent of black workers are public employees, compared with 16.3 percent of nonblacks.

A Crumbling 'Pillar' Of The Black Middle Class

But government jobs, long considered the most secure form of employment in America, have rapidly disappeared since the start of the last recession in December 2007 — particularly at the state and local levels, where officials have cut budgets to cope with declining tax revenues and the rising costs of unemployment benefits, employee pensions and Medicare.

Government has shed 2.6 percent of its jobs over the past three years, marking the greatest reduction in history, according to the nonprofit Roosevelt Institute, a progressive-leaning organization. Roughly 265,000 workers were shed from all levels of government last year, after about 221,000 job cuts in 2010.

Though the recession has ended, government job losses continue to be one of the most powerful drags on the economic recovery.

In April, private employers added 130,000 jobs, but that growth was partially undermined by the loss of 15,000 government jobs. As a result, the net growth of 115,000 jobs fell well below most economists' projections and was down from March's revised 154,000 jobs added. The unemployment rate dropped slightly, to 8.1 percent.

After the civil rights gains of the 1960s opened opportunities in government, blacks began a steady move into local, state and federal government, particularly in civil servant and teaching positions. And since the collapse of U.S. manufacturing, the public sector has been the biggest employer for African-Americans.

Beyond the jobs themselves, their relatively competitive pay scales have lifted generations of blacks into the middle class. Berkeley's labor center found that among industries that pay blacks the highest wages, the biggest proportion of those blacks work in the public sector.

The earnings gap between whites and blacks, which exists in all industries, is the narrowest in government, the Berkeley research has shown.

But that security is waning. To express their frustrations about the economy, many African-Americans often invoke an old metaphor, to their chagrin: When everyone else gets the sniffles, we catch the flu. April's jobless rates bear out the same, showing unemployment for whites at 7.4 percent, Latinos at 10.3 percent and blacks at 13 percent.

The three pillars of middle class African-American life were the public sector, good manufacturing jobs, and black entrepreneurs that served the black community during segregation.

"The three pillars of middle-class African-American life were the public sector, good manufacturing jobs, and black entrepreneurs that served the black community during segregation," says economist Steven Pitts, who led the Berkeley Center's research. "With the end of segregation, you put pressure on the black entrepreneurs, and then there was the decline in manufacturing. Now we see the erosion of the third pillar — the public sector."

Not surprisingly, then, government cuts trigger resentment among African-Americans, especially since "big government" has become a politically polarizing phrase.

Republican elected officials who rode Tea Party support to victory in the 2010 midterm elections placed government cuts at the center of their plans to eliminate state budget shortfalls and reduce the federal deficit. The impact of their strategy is most clearly seen in state government jobs.

More than 70 percent of last year's government job cuts occurred in just 12 states, all of which are controlled by majority-Republican legislatures, according to the Roosevelt Institute. The legislatures in 11 of those states came under Republican control in 2010.

What Republicans call an attack on "big government," many blacks see as an attack on their livelihoods, given their heavy reliance on the public sector for employment.

Since the employment peak of July 2008, blacks and whites have borne most of the job losses in government, according to Harrison. During and after the recession, blacks have lost more jobs in federal and local governments, while whites have gained slightly at the state level.

Marc Morial, president and chief executive of the National Urban League, blames the recession for eliminating "almost all the economic gains that blacks have made over the past 30 years," he says. "It took away substantially the gains in employment and the gains in homeownership. We went back to the unemployment rates similar to the 1970s recession."

At the same time, Hispanics are bucking the trend. Despite their high unemployment rate, enough of them are joining government to post a net increase in job growth at all levels of government.

The number of Latinos in government has increased every month since November 2008. In February, the latest sampling Harrison compiled, the government sector lost 5.6 percent of black workers and nearly 3 percent of white employees but gained 10.6 percent more Hispanics.

"Hispanics have been underrepresented in the public sector, and blacks have been overrepresented," says Harrison, a former chief of the Census Bureau's Racial Statistics Branch. "This might be an overcorrection to hire Hispanics as that population grows, particularly in positions where the government has to serve the Hispanic population and needs people who speak Spanish."