Accessibility links
The Nation: Obama's Phony Position On Gay Marriage The debate over gay marriage is heating up. North Carolina voted in an amendment banning it, just as Vice President Joe Biden said he supported it. Richard Kim of The Nation looks at President Obama's position, and finds it to be insincere. President Barack Obama speaks during the 58th US National Prayer Breakfast February 4, 2010 where he denounced as 'odious' a proposed anti-gay law in Uganda. The President has famously said that his personal views on gay marriage are "evolving." Mandel Ngan/AFP/Getty Images hide caption 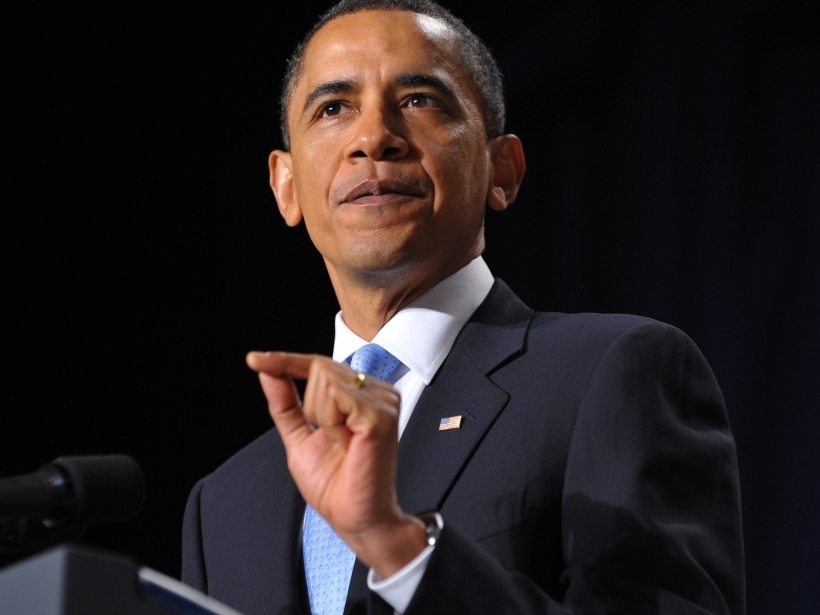 President Barack Obama speaks during the 58th US National Prayer Breakfast February 4, 2010 where he denounced as 'odious' a proposed anti-gay law in Uganda. The President has famously said that his personal views on gay marriage are "evolving."

Read Another Opinion On President Obama's Stance On Gay Marriage

Richard Kim is the executive editor of TheNation.com.

Joe Biden's garbled statement on Meet the Press that he's "absolutely comfortable with...men marrying men, women marrying women" has the political world atwitter parsing the meaning and implications. Did Biden actually come out in support for same-sex marriage (not really, argues Andrew Sullivan)? Was this a calculated attempt by the administration to moonwalk into a pro-gay marriage position (possibly, says Josh Marshall)? Or was Biden off the leash in an unscripted break from the White House (no, counters David Axelrod)? Once Education Secretary Arne Duncan endorsed same-sex marriage on today's Morning Joe, the speculation that Obama's "evolving" position on gay marriage will reach its final, logical conclusion by November's election went into overdrive (not gonna happen, concludes Chris Cillizza).

There's one thing that has always irked me about Obama's evolutionary narrative on same-sex marriage — and that's not his position on it per se so much as the insincerity of his homophobia. To take Obama at his word, same-sex marriage is something he "wrestles" with, something he thinks a lot about and might support but for a deep conflict with his Christian faith. I'm not privy to what goes on in the president's head, but frankly, this smells like b- - - - - - t.

As I wrote back in 2009, Obama unambiguously supported same-sex marriage in 1996. In response to a survey from Outlines, a gay community newspaper in Chicago, Obama took the unusual step of typing in his response: "I favor legalizing same-sex marriage, and would fight efforts to prohibit such marriages." At the time, his was a position on the progressive edge of the Democratic Party.

Since then, in striking contrast to other members of his generation who have moved to support same-sex marriage — and in ways that are at odds with his other views on civil rights, family and citizenship — Obama has "evolved" rightward. There's no other way to explain this shift except in the most obvious terms — as a matter of sheer political calculation. The further up the political food chain Obama went, the more he concluded that being adamantly pro-gay wasn't to his electoral benefit. In other words, his current view isn't a product of evolution so much as it is of intelligent design.

Except it doesn't look so smart now. During his first term, young people and independents moved towards supporting same-sex marriage in significant numbers, and while I agree with Cillizza that the electoral math isn't quite there yet to make this an outright winner for the Democrats, that day is not far off. I have no doubt that Obama would like to be on the right side of the "arc of history" on this one (and in other ways, like on "don't ask, don't tell," he has been). But his current, muddled position makes it difficult to draw a sharp contrast with Mitt Romney (who has done his own share of waffling on this one). And more to the point — there's the awkward matter of stage-managing a sitting president as he publicly wrestles with his conscience only to reach a conclusion that he himself already likely believes.

Obama needs an exit strategy — and that probably won't happen until his second term. But maybe then some gay staffers or former students can get married, and he can attend their wedding and then get all misty in the Rose Garden. "Until I saw Chip and Ru united in matrimony, I didn't see how meaningful the vow of marriage could be, and I didn't understand how hurtful it was to deny gay and lesbian Americans this profound right..." Yadda yadda yadda. You can write the script now.

On the plus side, I do believe there are older Americans who are conflicted about this issue (and who often indicate that by saying they support civil unions, but not same-sex marriage) — and perhaps the president's bit of theater could provide a template for their own moral conversion.

Yes, this is all breathtakingly cynical — but then again, so is President Obama's current "evolving" position.