Accessibility links
Who's Afraid Of Sendak's Stories? Adults, Mostly A baby is snatched away by goblins in Maurice Sendak's unsettling children's book, Outside Over There. Commentator Amanda Katz says she loved this book as a child, and only later understood why it made adults so uncomfortable. 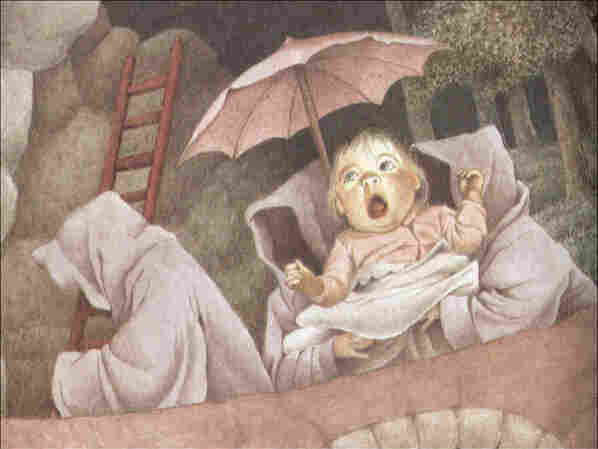 A baby is snatched away by goblins in Maurice Sendak's Outside Over There. The beloved author and illustrator — who took a darker approach to children's storytelling — died Tuesday at the age of 83. HarperCollins hide caption 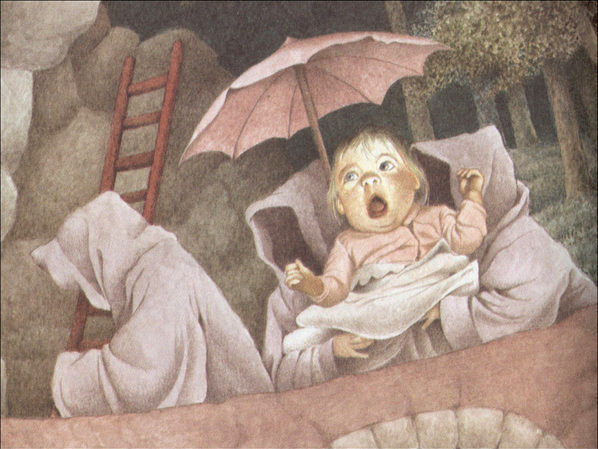 A baby is snatched away by goblins in Maurice Sendak's Outside Over There. The beloved author and illustrator — who took a darker approach to children's storytelling — died Tuesday at the age of 83.

In my house growing up — a house of readers — few books were off-limits. My mother once famously hid my little brother's Smurf comic book, in which nearly all nouns and verbs had been replaced by the word "smurf," after being asked to read it aloud one too many times. But in hindsight, that only demonstrates a healthy instinct for survival. In general, no one batted an eye when I read, or attempted to read, sad books (Bambi), dirty books (Clan of the Cave Bear), paint-by-numbers books (Sweet Valley Twins), or books that were simply way over my head (A Wrinkle in Time at 6? You try explaining a tesseract to a first-grader).

Two books I loved as a young child, though, did seem to make adults uncomfortable. Looking back at them now, I'm struck by two things: They are indeed quite disturbing; and they are oddly similar in plot.

One was the Brothers Grimm fairy tale "The Juniper Tree," a story in which (forgive the spoilers; it has been out for two centuries) a small boy is murdered by his stepmother, who then sets up her own even younger daughter to think she has killed him. Then she feeds the dead boy to his father, upon which the appalled, grief-stricken half-sister triggers a supernatural process that eventually brings her brother back to life and kills the evil stepmom. Then the three remaining family members rejoice and finish their dinner. This narrative now seems so horrific that I found myself hesitating even to summarize it for you; as a kid, I begged my parents to read it again and again. 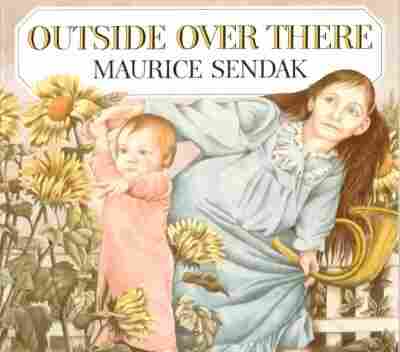 Title
Outside over There
Author
Maurice Sendak

The other book is one that's being widely re-read this week: Maurice Sendak's Outside Over There. Sendak, who died Tuesday at the age of 83, is beloved for writing and illustrating children's books that feel like dreams, ones where a resourceful child or animal lights out for adventure and faces down mysterious obstacles before returning to a place of comfort: home, a warm bed, hot soup. Outside Over There is, along with the more joyous In the Night Kitchen and the mega-blockbuster Where the Wild Things Are, one of his three most celebrated books. It won a National Book Award and a Caldecott Honor. And it is still, nevertheless, challenging and a little scary — at least to adults.

Though it has none of the bald violence of "The Juniper Tree," Outside Over There is also the story of a sister whose sibling is torn from her, and who fights to bring him or her back. Ida, Sendak's big-eyed, horn-playing child heroine, is left with her mother and baby sister when her father goes off to sea. The family inhabits a pastoral wonderland, a kind of German Romantic landscape full of sailors and shepherds and sunflowers crowding, just a touch too aggressively, through the windows of a stately home. As Ida, left to watch the baby, plays her horn, faceless cloaked goblins sneak in to steal the baby and leave a terrifying changeling in her place: an ice infant. When Ida realizes what's happened, she climbs out the window backward — "a serious mistake," Sendak tells us — into the land beyond her safe home, with its arbor and regal German shepherd: a land called "outside over there." And she does rescue the baby, the only solid creature among a host of fat goblin babies, and carries her home again. 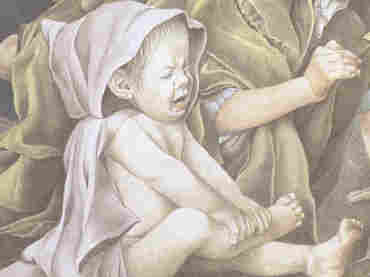 Click here to view an audio slideshow in which Sendak explains to NPR's Steve Inkseep why he wasn't afraid to put his young protagonists in danger. HarperCollins hide caption

In 1981, when Outside Over There was published, I was an older sister to a round-cheeked 1-year-old boy who looked not unlike Ida's baby sister: big eyes, silky blond hair. Little wonder that I was fascinated by these stories of girls working out their loyalty to siblings in a bewildering world. The duty to watch a baby, perhaps too much for a child who would rather play her horn, or read; the sense of dark forces brooding at the edge of the picture, like the incomprehensible adult tensions and constraints that float over the head of every child (those goblins are present from the very first page); the terrifying feeling of making a mistake, but also the hope that even a grievous error was one you yourself could remedy; even Sendak's surreal illustrations of goblins melting into water or Ida twisting in the sky: All of this made intuitive sense to me. It was a vision of the world that was not only comforting, by the end of the book, but somehow illustrative — of how to be responsible, of how to be brave, of how to live surrounded by the incomprehensible.

When I look at this book now, I feel that same haunting familiarity — and I also see why adults who did not grow up with it might suppose it a bizarre and even slightly creepy choice for children. A child abducted when you fail to watch, an impostor baby that melts in your arms, an absent father and a seemingly depressed mother, goblins, infant brides, children tumbling out of the house into midnight thunderstorms: Is this what you'd buy for your kid? And then there's Sendak's art, more painterly than in most of his books, the heavy, sober children quite unlike the spritely, almost cartoonish Mickey of In the Night Kitchen. Is this really what children want?

For me, the answer was yes. And yet even well-meaning adults might guess the opposite. When I worked in a children's bookstore, this book was a harder sell than Make Way for Ducklings or Curious George, and even though I loved it, I don't usually give it to friends with young kids. Adults know too much about a world where horrific things do happen, and prefer to think that young children need no more exposure to peril and uncertainty, to outside over there, than they will necessarily get in time.

Sendak himself — who told Stephen Colbert in an interview this January that he did not write for children but simply wrote — somehow escaped our sentimental notions about the need to protect kids from the loss and peculiarity of life. In his books, children learn about things that are orderly — alligators all around and doing dishes, or the niceness of sipping chicken soup in January when slipping on the sliding ice. But he also shows them disorderly worlds beyond their own, ones full of goblins and wild things, that they can visit and still go home. Meanwhile, he reminds adults — even those of us who were once those young and fascinated readers, but who are grown now — to trust our children, who may in the end be less fearful of climbing outside than we are to watch them do it.