Accessibility links
Romney's 1996 Help To Colleague Hits Airwaves Again Mitt Romney's superPAC is spending upward of $4 million on TV ads in nine key swing states in its first major media buy of the general election. One ad emphasizes Romney's compassion and generosity. But some say it may overstate the importance of his actions in helping a colleague's daughter. 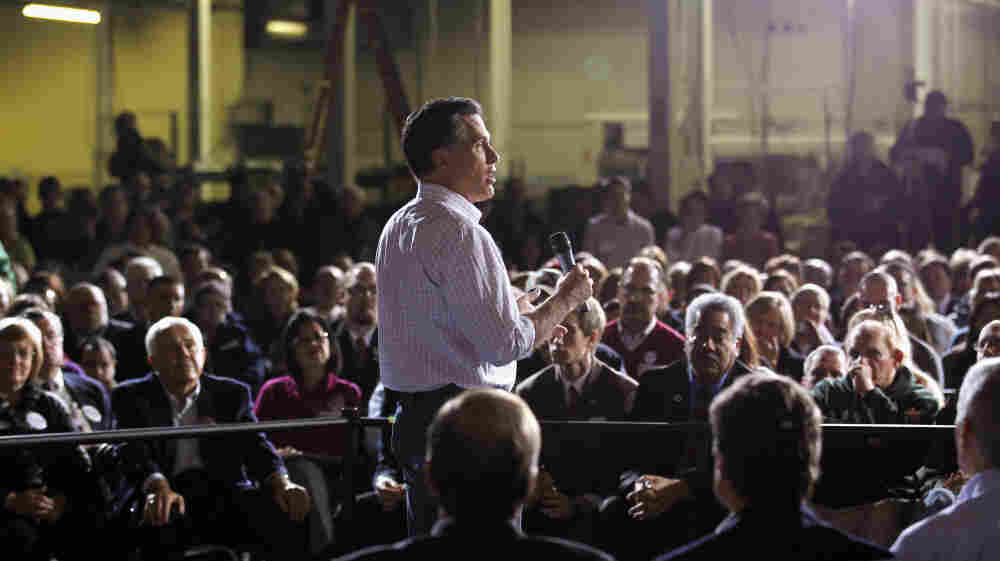 Mitt Romney speaks at a March 3 rally in Dayton, Ohio, where he told the story of the 1996 disappearance of the daughter of a colleague. Gerald Herbert/AP hide caption

For the past few days, Mitt Romney's superPAC has begun to flex its considerable financial muscle in nine key swing states. Restore Our Future is spending upward of $4 million on TV ads in its first major media buy of the general election.

One of those ads emphasizes Romney's compassion and generosity. But some say it may be overstating the importance of Romney's actions from an incident 16 years ago.

The 30-second commercial is called "Saved," and it tells a story that may be familiar to anyone who's followed Romney's political career.

The year was 1996, and Romney was running the private equity firm Bain Capital in Boston. One of the partners in the firm, Robert Gay, told Romney that his teenage daughter had gone missing after a party in New York City.

Robert Gay explains how Mitt Romney helped search for Gay's missing teenage daughter in 1996, in this Restore Our Future ad.

"He closed the company and brought almost all our employees to New York," an emotional Gay says in the ad. "He said, 'I don't care how long it takes. We're gonna find her.' He set up a command center and searched through the night."

The story of the missing teen has been a part of every campaign Romney has run since. A similar ad ran during the primary season in 2008, and this exact same ad aired in some primary states earlier this year.

The story has been fact-checked by the website PolitiFact, an NPR partner, which pronounced it "true."

The Romney campaign declined to make anyone available to talk about it.

But Romney himself told a version of the story when he was asked about it at a town hall meeting in Dayton, Ohio, on March 3: "I said, 'Let's close the firm. Let's close the company. ... Let's all of us fly down to New York and try and find her.' And so we closed the business. We went home and packed our things."

Romney and company set up shop in a hotel near LaGuardia Airport. And they canvassed New York City, handing out photos of 14-year-old Melissa Gay in some of the tougher parts of town. They got their lawyers and accountants to help, too.

"And so there we were, a bunch of folks in suits walking around in the park of New York and in the streets. And showing pictures and saying, when we saw teenagers, 'Have you seen this girl?' " said Romney.

Before long, this bunch of folks in suits attracted attention from the New York media. And an anonymous tipster called the hotline Romney and company had set up, asking about a reward.

"We were able to trace that call and go to that home. It was in New Jersey. And we found her in the basement of that home," recalled Romney.

Melissa Gay was returned to her family after five days. Her father expresses his gratitude 16 years later in the new TV ad: "Mitt's done a lot of things people say are nearly impossible. But for me, the most important thing he's ever done is to help save my daughter."

The Gay family did not return calls for comment for this story. But those who knew Melissa Gay at the time question whether she ever needed to be "saved" at all. Gay turned up in Montville, a well-to-do suburb in northern New Jersey, at the home of her then-boyfriend, Doug Becker.

Becker says Gay was just a rebellious teenager — and that she was never in any particular danger. Still, Becker credits Romney with helping to reconnect the girl with her parents quickly.

To Romney supporters, the episode underscores his capacity for compassion.

"Contrary to his reputation, Mitt is not all about the money," said Geoffrey Rehnert, co-CEO of Audax Group, a private equity firm in Boston. In 1996, he was a managing director at Bain Capital when Romney took charge of the search for Melissa Gay.

"Mitt is the most capable person that I've ever worked with. He is calm under pressure. He's very good at getting people to work together and this was, I think, an excellent case in point," said Rehnert.

Those are all messages Romney's campaigns have tried hard to convey in the past. And Restore Our Future has decided to begin its efforts on Romney's behalf with these messages this year, too.