Accessibility links
'Frankenfish': It's What's For Dinner Snakeheads came to Maryland almost 10 years ago. More people are acquiring a taste for the fish, some to help curb the invasive species' population. But they're kind of pricey. Plus, they're called "snakeheads" and look like Jacques Cousteau's nightmares. So a lot of them are still swimming around. 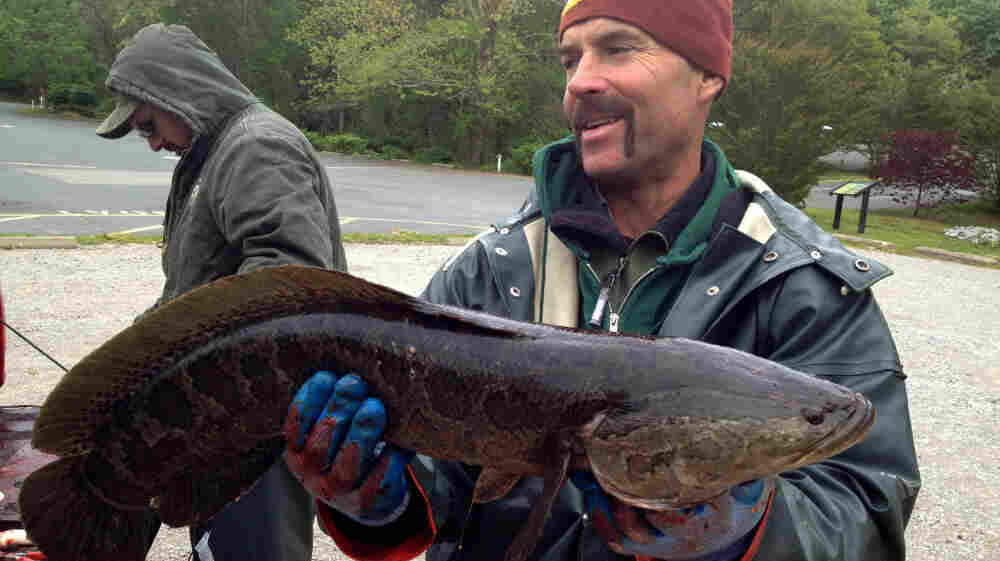 John Odenkirk holds up a snakehead. The fish can survive for long periods of time out of water as long as they're kept moist. They breathe air by gulping it, so they don't need to stay submerged. Sabri Ben-Achour/for NPR hide caption 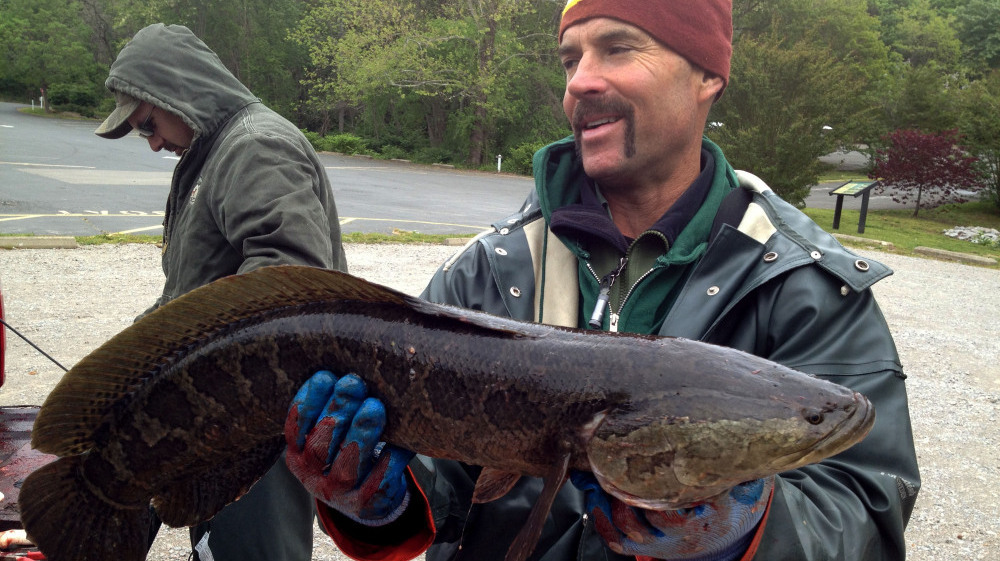 John Odenkirk holds up a snakehead. The fish can survive for long periods of time out of water as long as they're kept moist. They breathe air by gulping it, so they don't need to stay submerged.

This spice works great with all fish, game and poultry for blackening and smoking.
It can also be stored for quite some time.

Remove leaves from cilantro and roughly chop, then add them to the mixing bowl with the pineapple squares.

Pour the cream of coconut into a separate bowl and stir with a fork until smooth; it should be white in color. Set bowl aside. Combine 6 tablespoons of the cream of coconut with the pineapple cilantro mixture. If you'd like it spicy, add 1 diced habanero pepper. Place salsa in refrigerator.

With a dry towel pat the flesh to remove excess moisture. Coat each piece of fish on one side with a generous amount of blackening seasoning. Place a tablespoon of cooking oil into a cast-iron skillet or saute pan and place over high heat. Once the pan has heated (you'll know its hot when the oil is about to smoke and slides freely across the pan), place each piece of fish — seasoned side down — on the pan and press gently with a spatula.

Allow the fish to sear for approximately 3 minutes.

Gently turn fish over and sear for 1 minute. Place the fish in the oven and cook until desired temperature is reached (about 3-5 minutes depending on the thickness of the filet).

Slice avocado and place on a plate; gently season the avocado with kosher salt. Place pina colada salsa on the center of the plate, then put blackened snakehead on top of the pina colada salsa. Garnish with roasted red pepper and strawberries.

More people on the East Coast are acquiring a taste for snakehead, an exotic fish that's moved here from Asia. But the fish are still multiplying and spreading.

Snakehead came to Maryland almost 10 years ago. The so-called "Frankenfish" looks like its namesake and has multiple rows of teeth. Someone released it here — and then there was a documentary and an unbelievably bad movie.

Now, fast-forward a decade. Carrie Kennedy, a fisheries scientist for Maryland's Department of Natural Resources, is getting married. Like most weddings, hers will have a buffet of chicken and fish.

"But the fish we're going to have is going to be snakehead," she says.

Kennedy notes the fish is an invasive species. "We want it to go away, so we're trying to create a market," she says.

Their strategy may be working. Business in Maryland is almost booming.

"We got a couple hundred pounds yesterday, and all this fish will be gone this weekend," says John Rorapaugh of Profish, a wholesaler in Northeast Washington, D.C.

He's standing over crates of iced, giant snakeheads. The ravenous appetites of the fish are legendary. Rorapaugh and others have found batteries, mice, birds' feet and baby turtles in the bellies of the fish.

"Anything that swims past them that's living, they'll eat," he says.

And the fish are delicious. "When you bite into it, it almost feels like it falls apart because it's so tender," Rorapaugh says.

Beyond The 'Initial Hysteria'

This fish is mostly just available in restaurants right now, and it's kind of pricey. Plus, it's called "snakehead" and looks like Jacques Cousteau's nightmares. As a result, there are a lot of them still swimming around out there.

John Odenkirk is a biologist with the Virginia Department of Game and Inland Fisheries. He's standing on a boat on the Occoquan River, surveying the snakehead population by using an electric current in the water.

The electric generator goes on, and fish fly everywhere. Glints of silver flash as fish of all types start to spasm to the surface. Then three snakeheads — about 3 feet long — emerge from the depths.

"It's awesome when you hit 'em like that," Odenkirk says.

He measures the fish and tags them.

"It's got a unique number on it. It says 'Remove tag, report location and kill fish,' " he says.

Then he throws them back into the river.

Odenkirk says it looks like the snakeheads aren't turning out to be the ecological disaster people feared.

"We still don't know. We don't have enough information to make that call yet and probably won't for several more years," he says, "but it does look like some of the initial hysteria was probably overstated — not probably, it was almost surely overstated."

Still, the fish are considered a threat to the ecosystem. Back onshore, Kennedy is trying a sample for her wedding.

"It's really good. The best thing would be if it wasn't around at all, but, you know what, if you have lemons you might as well make lemonade," she says.

Or at least lemon wedges for a nice garnish.