Accessibility links
After The Quake, Japanese Shop For Survival Memories of the massive earthquake and tsunami that hit Japan have created a niche industry of "disaster-protection gear." Many Japanese are now fully stocked up on emergency equipment, food and water. 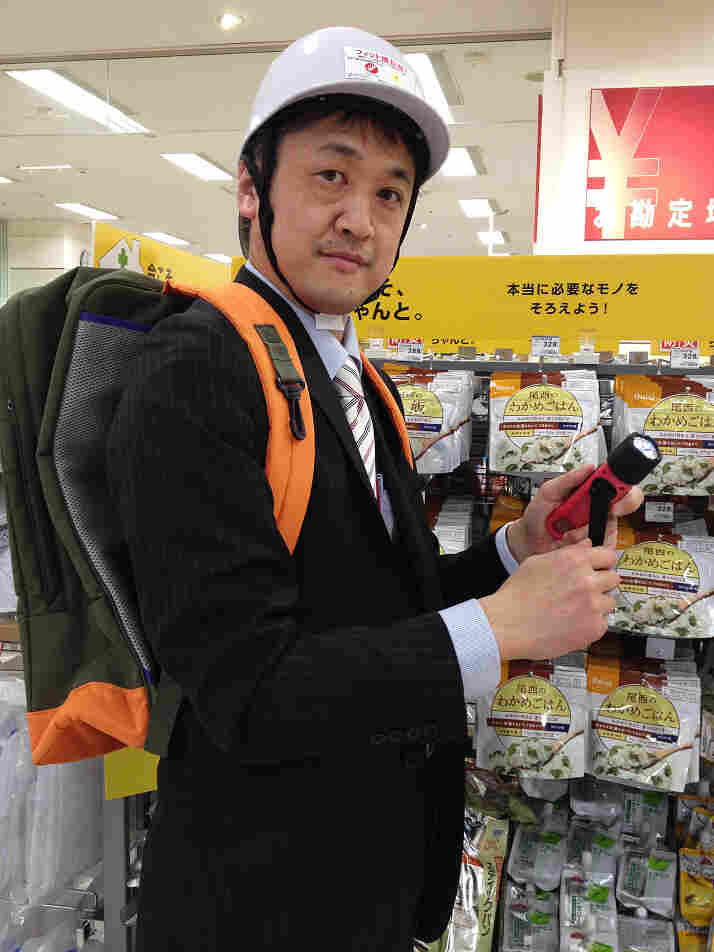 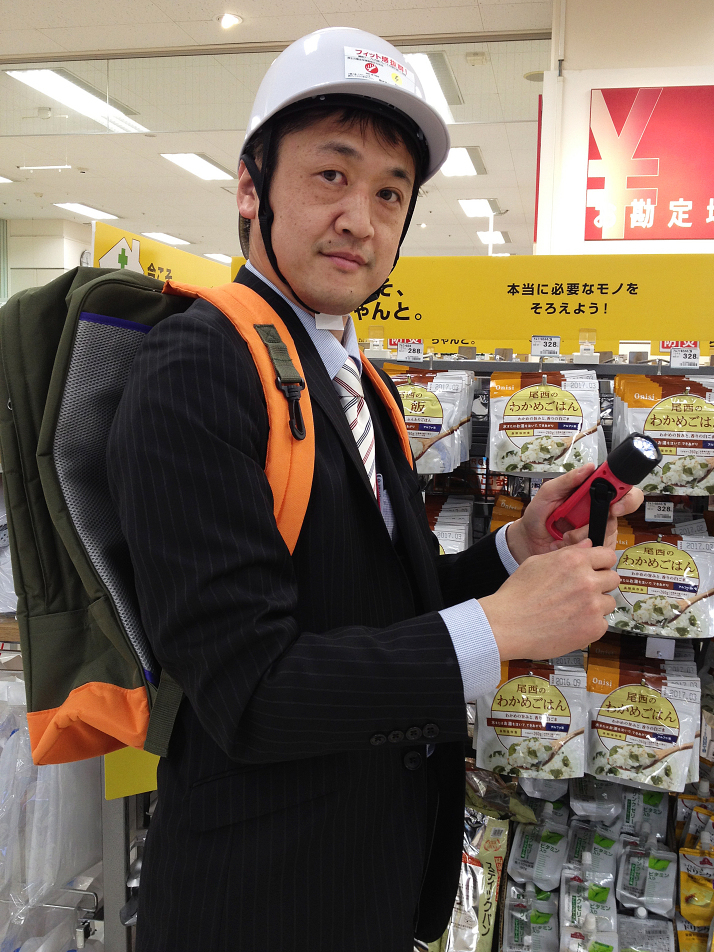 Store manager Naoto Higashi models a helmet, a fully stocked kit in his backpack, and a windup flashlight. Such items have become popular in Japan following last year's huge earthquake and tsunami.

Walk into any large Japanese retailer nowadays, and you might think Japan had become a nation of survivalists.

Aeon, a Wal-Mart-like chain of stores, devotes a sizable chunk of floor space to something called bosai-yohin, or "disaster-protection gear."

Naoto Higashi, a manager at one of the Tokyo stores, demonstrates some of their best-sellers, flashlights that have become the Swiss Army knives of anti-earthquake gear.

"This light ... doesn't need batteries. It's very compact. You just wind it up. It also flashes, as an emergency light, and you can use it as a lantern, too," he says.

There are flashlights that do triple duty as radios and cellphone chargers, and light bulbs that store up power while in use. In a blackout, just pull the light bulb out of its socket, and it lights up off its own charge for three hours.

"These slippers have steel soles. These protect your feet from broken glass. It's a huge hit since the disaster last year," Higashi says.

The assortment of disaster goods — meant to keep people alive for several days — is mind-boggling. There are chemical packs for warming up food, and other chemicals, packed in drink-size bottles, which can be thrown into fires to extinguish them.

Aeon sells specially sealed biscuits, rice and even beef curry — which is supposed to be good until 2017. There are helmets that fold up, protection kits for pets, as well as fully stocked kits for humans, tucked into backpacks and designed to be stored under beds. But those are so popular, there's a waiting list.

Housewife Nao Mita has already stockpiled emergency rations and a portable toilet but is prowling the aisles for more gear.

"We're not getting as many quakes now, but whenever one hits, I get nervous, and think, I need to get supplies ready," she says.

Preparing For The Big One

These slippers have steel soles. These protect your feet from broken glass. It's a huge hit since the disaster last year.

Mita is in good company. Ever since last year's earthquake and tsunami, a steady drumbeat of warnings from seismologists predicts the worst is yet to come.

Tokyo University says there's a 70 percent chance of a major earthquake hitting the nation's capital in the next few years, and scientists recently announced that a confluence of quakes south of Tokyo could unleash enough force to knock down city skyscrapers.

A recent survey showed two-thirds of Japanese have armed themselves with some kind of disaster gear. Rie Sakakibara, who works for a health services firm in Tokyo, is among them.

She has an emergency blanket, snacks, a flashlight she always wears around her neck, a cellphone, a smartphone — plus five extra phones — and lots of batteries.

In fact, her emergency grab bag easily weighs 20 pounds. Traumatized by last year's disasters and the panicky aftermath, Sakakibara has sworn off high heels and fashion in favor of flats and comfortable clothing — in case the trains stop again and she ends up stranded.

But not everyone buys into the buying craze. In fact, at least one survivor of the deadly Kobe earthquake of 1995 says the obsession with buying supplies is a waste of money for urban residents, who are never more than a day away from help.

Instead of investing in helmets and dried food, he told readers of his website that city dwellers should focus on how to keep their furniture from crushing them alive when, and if, the big one hits.