Accessibility links
Afghan Goal: Toning Down The Radical Preachers Muslim clerics in Afghanistan often denounce the U.S. military presence and speak favorably of the Taliban. The Afghan government is now calling on the clerics to be more moderate, or face penalties. 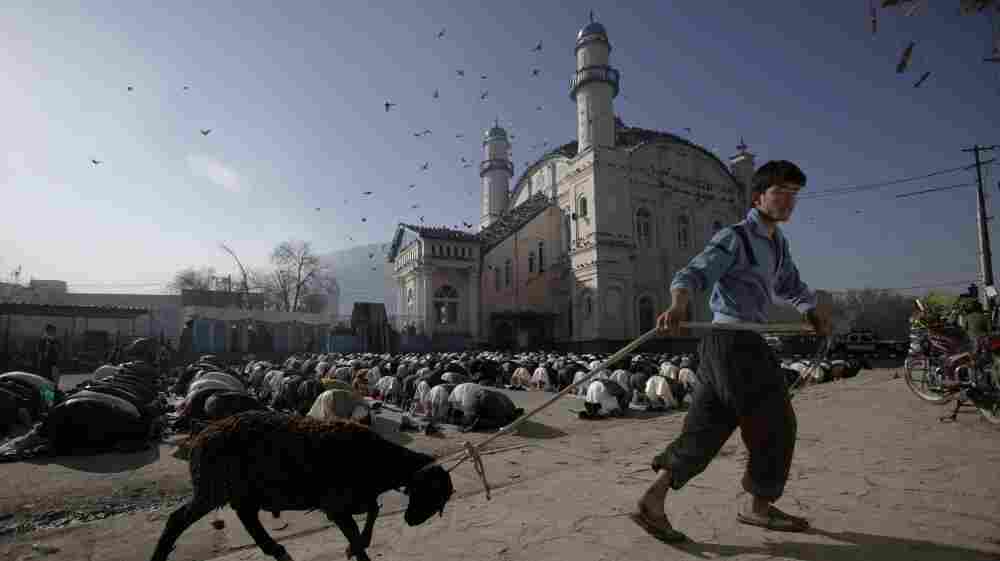 The Afghan government wants Muslim preachers to tone down sermons that often criticize the presence of American troops and praise the Taliban. Here, an Afghan youth drags his sheep past a group of men praying at a mosque in Kabul in November 2011. Muhammed Muheisen/AP hide caption 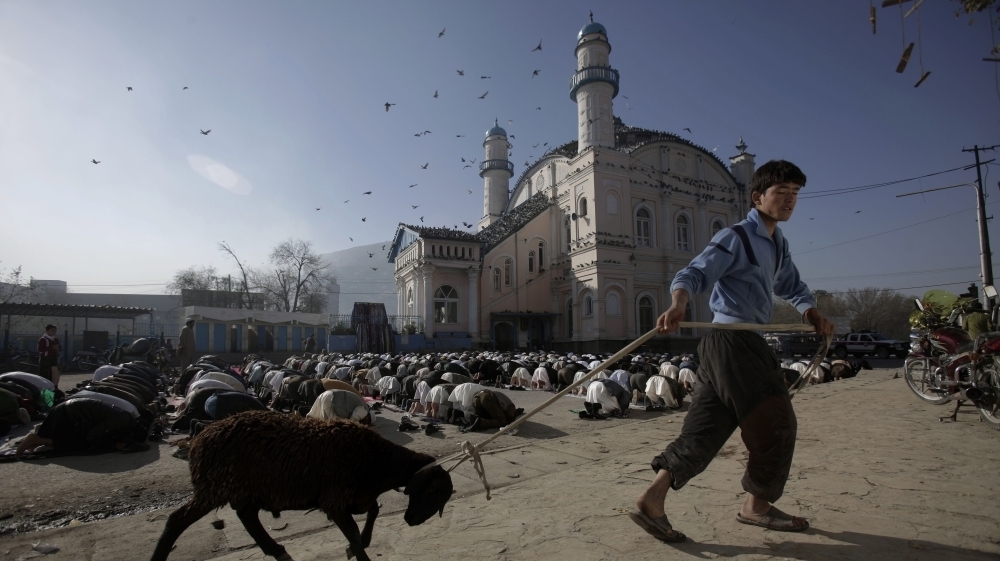 The Afghan government wants Muslim preachers to tone down sermons that often criticize the presence of American troops and praise the Taliban. Here, an Afghan youth drags his sheep past a group of men praying at a mosque in Kabul in November 2011.

The ministry that governs religious affairs in Afghanistan has announced what some are calling a "three strikes" policy.

It's a warning directed at Muslim clerics, or imams, accused of inciting violence in their Friday sermons. Imams across the country routinely condemn the U.S. presence in Afghanistan and speak in favor of the Taliban.

Despite the rapid growth of the media in Afghanistan, many still get their news and commentary during the traditional Friday prayers at the mosque. The Friday sermon usually has one religious lesson — but another section is reserved for current events. The message on one recent Friday at a central Kabul mosque was about corruption.

The imam railed against corrupt politicians, but it was tame compared with what often comes over the loudspeakers. In rural areas, the sermons sometimes directly support the Taliban. Regular rants against the government and its American allies prompted the Ministry of Religious Affairs to put mosques nationwide on notice.

Abdul Malik Zeyaee, a senior ministry official, says that imams — many of whom are appointed by the ministry — will get three strikes if they incite violence.

First they get a warning, and then a dismissal from the post. And finally, if they keep preaching, a visit from Afghanistan's security services.

The minister of religious affairs later said the policy was not so clear cut, but imams around Kabul are already talking about it.

Only a fraction of the 100,000 mosques in Afghanistan are officially registered, so the impact of the new rule is not clear. But it demonstrates the level of concern — which is shared by the White House.

If Islam is being taught in the proper way ... it's very obvious that the religion rejects terrorism.

Rashad Hussain, Obama administration envoy who has been meeting with Muslim clerics in Afghanistan

"If Islam is being taught in the proper way ... it's very obvious that the religion rejects terrorism," says Rashad Hussain, the Obama administration's special envoy to the Organization of Islamic Cooperation.

He was in rural Paktika province last month as part of a tour of Afghanistan. Hussain is a religious scholar and surprised a group of local mullahs by reciting verses of the Quran from memory.

The mullahs in the meeting said they agreed with Hussain completely, and thanked him politely for coming. But Hussain says he knows there are many Afghans who get a different message at the mosque — and the vast majority of them are illiterate.

"There's some places where people don't understand the Quran. They're not able to read and those people are exploited," he says. "Oftentimes, what's taught to them is taught in the name of religion, even though the religion itself rejects the idea that you can kill innocent people in order to achieve your objective."

A string of provocative incidents this year has made it hard for imams to keep silent — the errant burning of Qurans on a U.S. base, as well as the recent massacre of Afghan civilians near Kandahar.

Ahmad Shah Ahmadzai, a former prime minister of Afghanistan, says it's impossible to stop preachers from speaking out.

"Your soldiers are killing; your soldiers are doing very very bad things there," he says. "They are stepping here on the Quran. ... Don't torture Muslims in Afghanistan. Don't kill innocent children, women and girls."

The United Nations and the Afghan government blame the large majority of civilian deaths on the insurgents. But mullahs rarely denounce the Taliban — perhaps out of fear. This week did see a string of civilian casualties from NATO airstrikes, a topic that will surely get attention at this Friday's sermons across the country.