Accessibility links
College Grads Struggle To Gain Financial Footing A new Rutgers University survey finds just half of those who graduated from college between 2006 and 2011 are working full time. Burdened by student loan debt, and with wages depressed even for those with jobs, many say they no longer believe that education and hard work will necessarily lead to success. 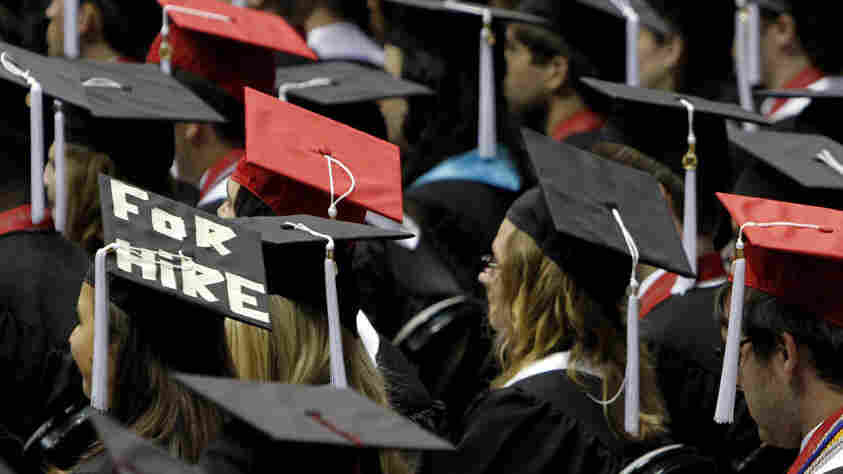 Graduates of the University of Alabama's class of 2011. The economic downturn has hit recent college grads hard. New data show only half of those who graduated from 2006 to 2011 are working full time. Butch Dill/AP hide caption

Most of the estimated 1.5 million people graduating from a four-year college this spring will soon be looking for a job.

If the experiences of other recent college grads are any guide, many will be disappointed.

A new Rutgers University survey of those who graduated from college between 2006 and 2011 finds that just half of those grads are working full time.

"I thought I wasn't going to get a job," says Caitlin LaCour, who entered Columbia College Chicago the year the most recent recession began. By the time she graduated in 2011, she says, "I was happy to have one part-time job."

LaCour also felt lucky that the job, doing promotions for a Chicago radio station, related to her major in radio production. But she earns just $10 an hour. By the time she had to start making payments on her $100,000 student loan debt, LaCour realized her paycheck would not be nearly enough.

She took on a second part-time job at a shoe store, and then a third, also at the radio station.

"I got addicted to working," LaCour says. "I just burned myself out, because I didn't want to have to worry about not being able to pay my loans."

LaCour must pay more than $700 each month in student loans, and the only way she can make the payments is by living rent-free with her parents.

"I thought I wasn't going to get a job. I was happy to have one part-time job.

It's a situation that's come to symbolize graduating post-recession.

More Have Debt Than Have Jobs

"More come out with debt than come out with jobs," says Cliff Zukin, a senior research fellow with the Heldrich Center for Workforce Development at Rutgers University.

The center's new study finds that 6 in 10 students take on debt — more than $20,000 on average — even as a lack of jobs leaves them less able to pay it back.

"In the data," Zukin says, "there's certainly a suggestion that the American dream has stopped at these guys' doorstep."

Zukin says nearly half of college graduates with full-time work are in jobs that don't require a college degree. And very few respondents say their first job will lead to a career. In fact, one-third of recent college grads say they no longer believe education combined with hard work will necessarily lead to success.

"They don't even see in the foreseeable future a secure job, a comfortable income, starting a family," he says. "And even more — 45 percent — do not see owning a home at any point in the near future."

Moreover, Zukin notes, this survey depicts the "cream of the crop" — the minority of young Americans who go to college. Unemployment is far higher among those who don't.

The Rutgers study finds that one-fifth of recent college grads have gone back to school — where many are now accumulating more debt.

Meanwhile, those respondents who got jobs since the recession began are making less than their peers who graduated in 2006 and 2007.

The difference amounts to "about 10 percent lower earnings," says Columbia University economist Till von Wachter. His research indicates that the depressed earnings can last a decade or more, although that effect can vary.

An engineering grad from a top school, for example, can job-hop and get back to a higher earning level in three or four years, von Wachter says. But "students who come from smaller, less-well-known schools and have majors such as humanities or arts — they tend to have depressed career paths lasting for a very long time."

Indeed, given the current job market, many respondents to the Rutgers survey now say they wish they had majored in something else.

Researcher Cliff Zukin wonders if it's the end of the happy, self-confident "millennial generation."

But while the Rutgers study may be sobering, many recent grads still retain a sense of optimism.

"I love the people I work with. I love my customers. I'm a people person," says Tiffany Conner, who graduated in 2009 and is now working, by choice, in two part-time retail jobs.

After college, Conner landed a full-time job in her field of marketing. But the work didn't make her happy, so she quit and moved back in with her parents in Wisconsin to figure out something else.

Conner's focus now is paying down her student loan and credit card debt.

"Debt is just one of those pieces of life, and being miserable about it isn't good either," Conner laughs. "So, keep my head up high, I guess. Keep plugging away, and I have nothing to be ashamed of."

After all, she knows she has plenty of company.