Accessibility links
Obama Lures Donors With A Hollywood Sweepstakes President Obama is attending a fundraiser at the California home of actor George Clooney, along with about 150 guests. Almost anyone can attend, if they pony up $40,000. But for a few sweepstakes winners, the price of admission is about $3. It's the latest innovation in political fundraising. 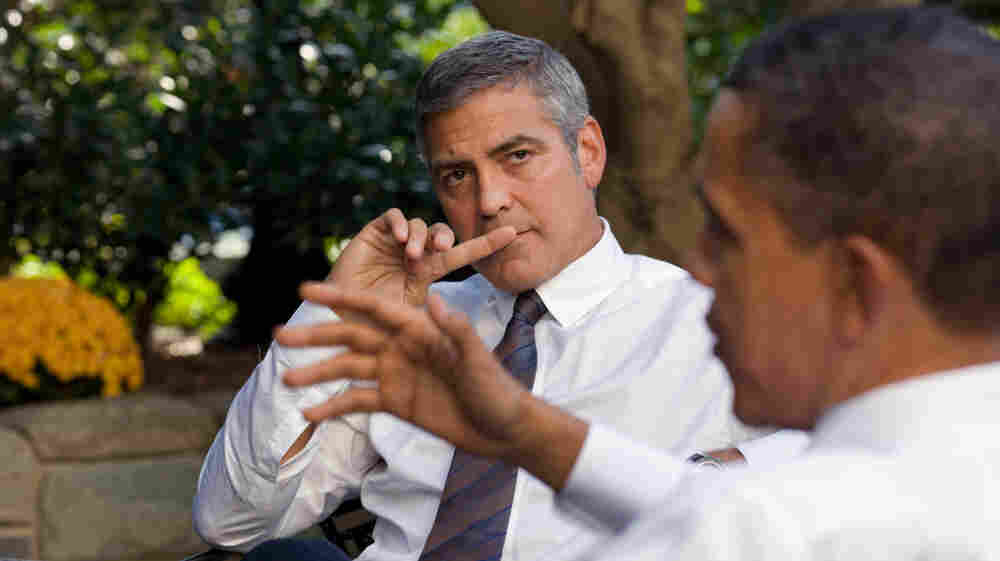 President Obama talks with actor George Clooney during a White House meeting about Sudan in 2010. The president is attending a fundraiser at Clooney's house Thursday, along with a few sweepstakes winners. Pete Souza/The White House hide caption

President Obama is attending a fundraiser at the home of actor George Clooney in Studio City, Calif., on Thursday evening, along with about 150 guests. Almost anyone can attend, if they pony up $40,000.

But for a few sweepstakes winners, the price of admission is about $3. It's the latest innovation in political fundraising.

Marketing-wise, there's nothing more old school than a sweepstakes.

You fill out a form and subscribe to a magazine or two; fast-forward a few months, and the Prize Patrol is at your front door giving you a check for $10 million, as in the classic scenario portrayed in Publishers Clearing House commercials.

"Sweepstakes are a classic marketing tool, and they do, you know, a couple things that are very important for brands and for organizations," says Tim Calkins, a marketing professor at Northwestern's Kellogg School of Management.

"One of the big things a sweepstakes will do is, you know, create some excitement around a business. And that's one of the reasons you'll run it — because it gets people excited, it gives people a reason to pay attention," says Calkins. "The other thing that a sweepstakes does, is it's an opportunity for people to engage, and then in return a marketer can then get access to all the contact information."

Calkins says what's true for a product holds true for a political campaign. And the Obama campaigns have been holding a variety of sweepstakes since 2007 — including one to win a presidential tweet for your mom on Mother's Day.

Thursday's event is not that different.

Donors were encouraged to give some small amount — as little as $3 — though they didn't have to. Then they were entered into the contest to go to Clooney's house.

The hope is to turn casual supporters into big fans like Eugenia Beh, a librarian in College Station, Texas.

"At the end of each quarter, they always send out a flurry of emails saying, 'We really need you to donate to the campaign in order to do etc., etc., etc.' I usually respond and give a certain amount, usually like $5 or $10. I'm definitely one of the small donors, I guess," says Beh.

Thursday's Obama-Clooney wild rumpus will raise $6 million from the big-money donors. Proceeds from the event will go to the Obama Victory Fund, the Democratic National Committee and several state Democratic parties. And one estimate has the event raking in just as much money from the thousands and thousands of small donors — all but four of whom will never set foot in Clooney's California home.

"You don't necessarily need the $3," says Michael Malbin of the Campaign Finance Institute. "What you need is for people to feel they have skin in the game. You need them to feel committed and attached to your enterprise so that when you really want something from them — and that could be time and not just money — but when you do it, that they feel that they've stayed connected to you."

Republican Mitt Romney's campaign isn't using tools like sweepstakes, Malbin says, and they're not raising as much money through small donations, though creating this kind of excitement might be more important for an incumbent

And Calkins, the marketing professor, says the real benefit of the sweepstakes goes beyond the money.

"Because once you can start reaching out to them, then you can see what they respond to down the road. And all of a sudden you can start learning all sorts of things about what they'll react to, what they'll respond to," says Calkins. "You can put them on your mailing list for this program or that program, and it gives you this little window to help understand a huge number of people."

And by understanding those people, the campaign can tailor its message and use those $3 donations more effectively.