Accessibility links
Hear That? Annoying Hum Has Canada Making Noise The residents of Windsor, Ontario, say they're being invaded by an irritating sound that's emanating from outside Detroit. It's known as the "Windsor Hum" and, with U.S. officials claiming Americans can't hear it, no one seems to know who should be in charge of shutting it up. 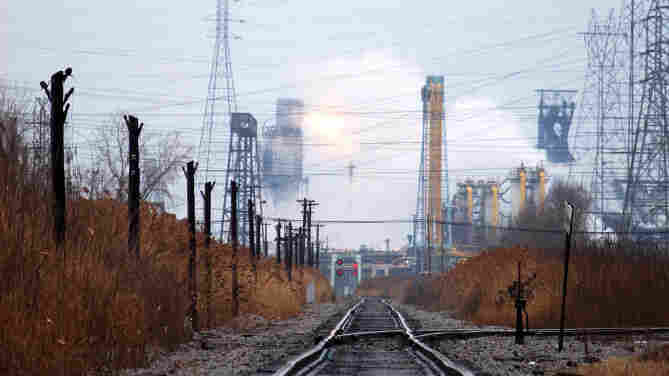 Huge belches of steam, smoke and flames rise from the smokestacks on Michigan's Zug Island. Residents of Windsor, Ontario, say they can hear a humming coming from the man-made island. Patricia Drury via Flickr hide caption

Thousands of people in Windsor, Ontario, say they are being invaded by an obnoxious noise emanating from outside Detroit. They call it the "Windsor Hum," and it's really two sounds — a deep, very low-frequency hum, like a diesel truck idling in your driveway, and a deep, vibrating pulse that you feel more than you hear.

Roy Norton, Detroit's Canadian consul general, says the noise is coming from the man-made Zug Island, which sits in the Detroit River. The noise apparently began when U.S. Steel reopened a mill on the island two years ago and, over time, Norton says, "It seems to have gotten worse."

U.S. officials say Americans can't hear it. Still, staff with Canada's Foreign Ministry have met with staff from the U.S. State Department to discuss it.

"We would like folks on [the American] side to cooperate with us and show equal seriousness," Norton says, but cooperation is the last thing Canada is getting. Both the U.S. Environmental Protection Agency and Michigan's Department of Environmental Quality say they have no jurisdiction over noise complaints, and U.S. Steel has no comment.

The seemingly endless game of pass-the-buck is maddening for people like Windsor resident Gary Grosse.

"The kids are being affected," Gross says. "They're cranky all the time. You know, my 4-year-old son walked outside one day, held his ears and said, 'It's too loud, Dad, it's too loud. I don't want to go outside.' "

Grosse is the administrator for the Windsor/Essex County Hum Facebook group. He's been mocked by some elected officials on the American side who say their constituents can't hear it, but that turns out not to be true. Darryl Patterson, who lives in River Rouge, Mich., where the island is located, says the hum shakes his house and wakes his new baby.

"Fourteen months old, barely sleeps through the night and he gets woken up by that sound," Patterson says. "Yeah, that's noise pollution — 'cause it's messing my sleep up."

A Canadian seismographic study already has identified the island as the likely source of the hum. Everyone agrees an acoustic study is the next step, but it appears that finding the money for a study is up to the Canadians. Until then, it's likely there will be more sleepless nights ahead for the people of Windsor.