Accessibility links
Obama, Romney In The Ring For Nevada's Latino Vote As President Obama heads to Reno for a speech Friday, volunteers are already on the ground reaching out to the fast-growing population. He faces tough competition, though: The GOP announced last month that it is launching a six-state campaign to win over Latinos. 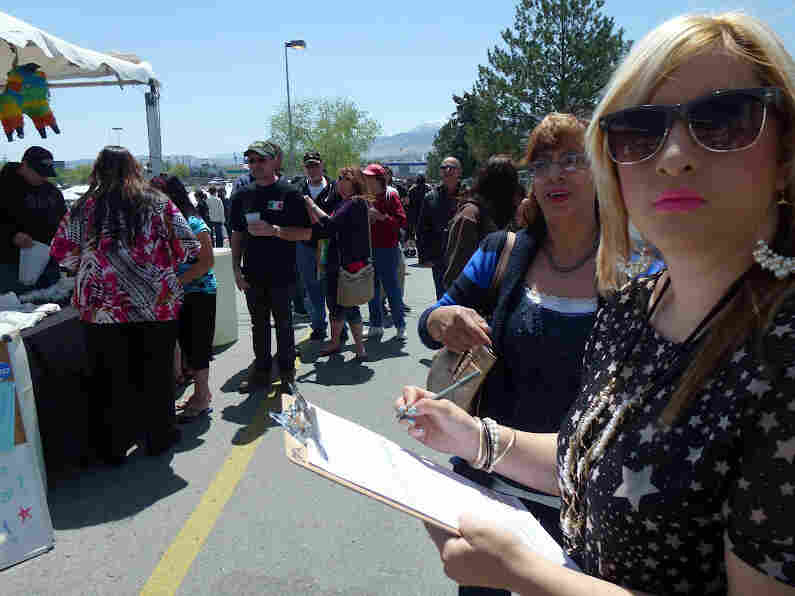 Caroline Maya, a 21-year-old college student, registers to vote for the first time at the Latinos for Obama booth outside the Grand Sierra Casino in Reno, Nev., Saturday. David Welna/NPR hide caption 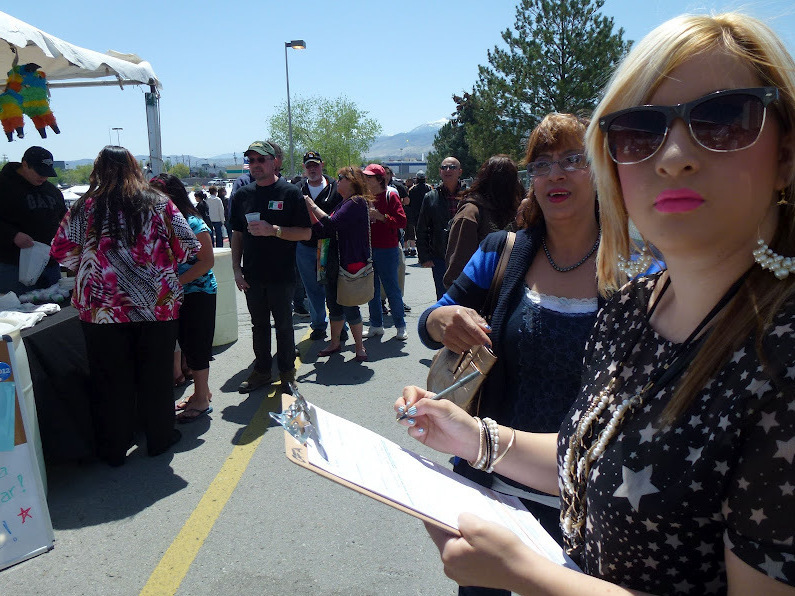 Caroline Maya, a 21-year-old college student, registers to vote for the first time at the Latinos for Obama booth outside the Grand Sierra Casino in Reno, Nev., Saturday.

President Obama is giving a speech about the economy Friday in Reno, Nev. It's his third trip to Nevada this year. In 2008, he won the state by 12 percentage points — in large part by getting more than three-quarters of the Latino vote.

Obama's re-election campaign has set its sights on the state's Latino voters again this year. At a big Cinco de Mayo festival outside Reno's Grand Sierra Casino on Saturday, a group called Latinos for Obama was trying to register new voters, while dancers and drummers performed ancient Aztec steps in an asphalt parking lot.

Nearly 2 million Latinos have turned 18 since the last presidential election. One of them is 21-year-old Caroline Maya, a college student born in Reno whose mother is from Mexico City.

It's Latino voters like Maya whom both parties are after.

"Latinos in the last election in 2010, they made up about 15 percent of the electorate here. Right now, they're about 21, 22 percent of the age-eligible voters. So there's still a fairly large untapped reservoir of Latino voters here," says David Damore, a political scientist who studies Latino voting at the University of Nevada, Las Vegas.

One of these ads, which is also running as a video, features 22-year-old Ernesto Apreza, a field director with Latinos for Obama in Las Vegas, knocking on doors and talking to Spanish-speaking voters about the new health care law.

In an interview, Apreza says it's tough getting people excited about the November election.

"I mean, realistically, we're six months out and for a lot of people it hasn't necessarily been, you know, at the top of their to-do list or their agenda," he says. "These are just everyday people with other things to worry about."

Despite a bruising primary in which Romney took harsh stands on illegal immigration, Republican National Committee Chairman Reince Priebus announced in a conference call last month that his party is launching a six-state campaign to win over Latino voters.

"This is what the RNC does: We engage voters, and I want everyone on the call to know that we are going to engage Hispanic[s] and Latinos like we've never done before at the RNC," he said.

Elsa Barnhill, the RNC's Nevada director of Hispanic outreach, says Republicans have big plans for going after the Latino vote in Nevada.

She says the RNC is revamping its efforts and reaching out to people. "We're doing a very aggressive 'get out the vote' program and bilingual media."

But not all Republicans in Nevada are comfortable with a bilingual push by their party. That was clear at the party's state convention last weekend when a delegate proposed that all campaign materials be printed in Spanish as well as in English. The proposal was put to a voice vote where the nays overwhelmed the ayes.

Daphne Wallace Edwards of Dayton was dismayed by the overwhelming rejection of her proposal.

"It just means that ... they're not going to change right now so we'll probably lose," she says. "Obama's already got 'em and ... he doesn't deserve them. We do."

Republican officials are counting on Latinos' disappointment with Nevada's very slow economic recovery to garner a bigger share of the Hispanic vote in November.

The president's endorsement of same-sex marriage may prove another disappointment to at least some Latinos. And while Republicans are arriving late to the game, they have six months to catch up.