Accessibility links
Same Bible, Different Verdict On Gay Marriage President Obama cited his Christianity when supporting same-sex marriage. Other people cited their religion to disagree. Why is there such variation? Part of it has to do with how you read the text. 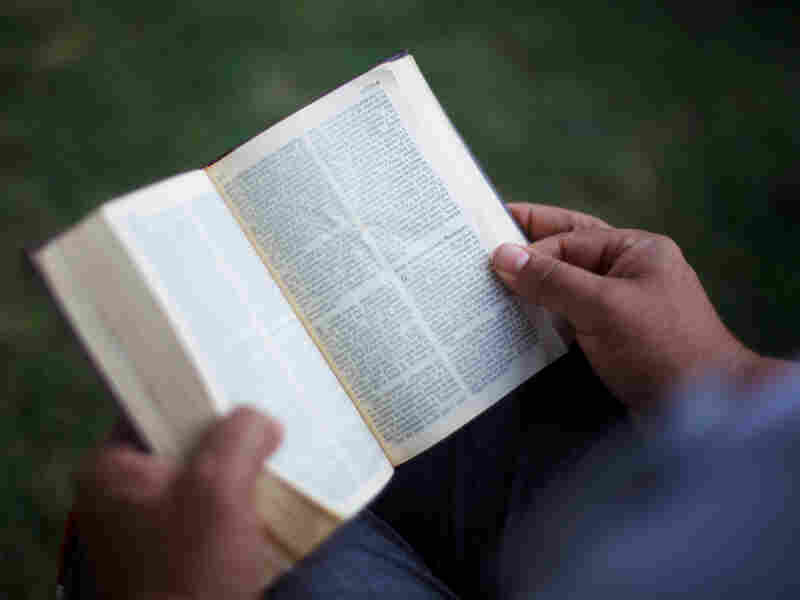 While liberal Christians argue the Bible should be interpreted as society changes, conservatives argue for a more literal reading, leading to differences in belief about God and homosexuality. Jonathan Gibby/Getty Images hide caption 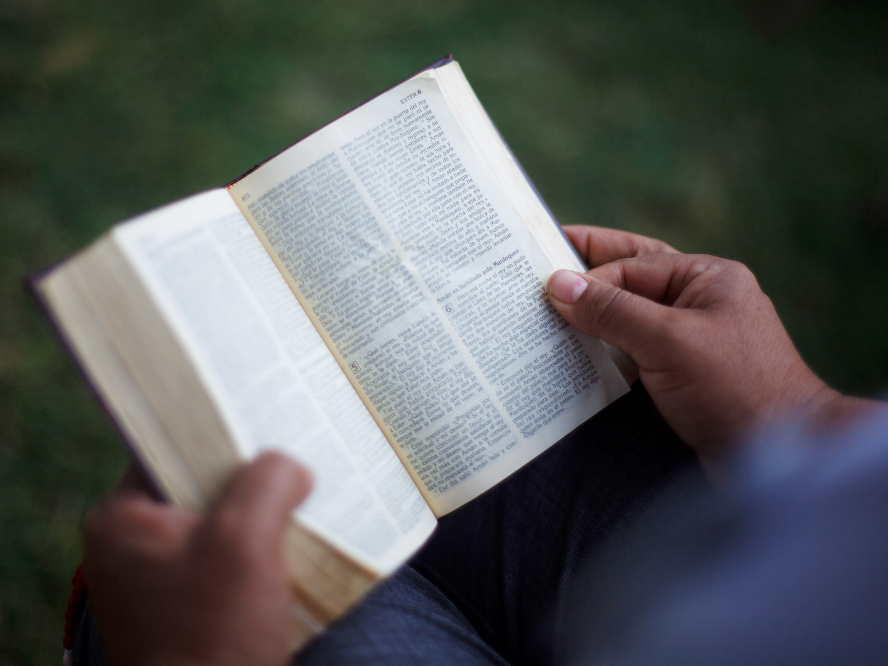 While liberal Christians argue the Bible should be interpreted as society changes, conservatives argue for a more literal reading, leading to differences in belief about God and homosexuality.

"The thing at root that we think about is, not only Christ sacrificing himself on our behalf, but it's also the Golden Rule, you know — treat others the way you would want to be treated," he said in his interview with ABC News.

Many other people cited their religion to disagree, raising the question: How can people read the same Bible and come to opposite conclusions about same-sex relationships?

It's true, says Carmen Fowler LaBerge: You can be a Christian and support same-sex marriage, but, she says, "nobody can say gay marriage is biblical. That's just foolishness."

LaBerge resigned her post as minister in the Presbyterian Church (U.S.A.) after the denomination voted last year to ordain noncelibate gay clergy. She says the Bible is clear.

"From the Old Testament and throughout the New Testament, the only sexual relationships that are affirmed in scripture are those in the context of marriage between one man and one woman," she says.

Actually, the Old Testament does condone polygamy. Still, LaBerge says, from Leviticus to Paul's writings in Romans and First Corinthians, homosexual acts are called vile and detestable, and legalizing same-sex relationships does not change the sin.

Not so fast, says the Rev. Susan Russell, an Episcopal priest at All Saints Church in Pasadena, Calif. She takes her cues from Jesus.

"Jesus never said a single word about anything even remotely connected to homosexuality," she says.

Jesus does say the most important commandments are "Love God" and "Love your neighbor as yourself." Given that, Russell believes if Jesus were here today, he would celebrate committed, same-sex relationships.

The Bible Vs. Culture

Russell says you take the Bible literally at your folly.

"When you read the Bible, you can find justification for almost anything," she says, "including slavery, the subjection of women and an argument that the sun actually revolves around the earth."

Russell and other liberal Christians argue the Bible is the living word of God, and much like the U.S. Constitution, needs to be interpreted as society changes.

But LaBerge says the issue is which has more sway: the Bible or culture?

Homosexual behavior is a fault line splitting Christian denominations in two — Episcopalians, Methodists, Presbyterians, Catholics — there's even a wide gulf between young and old Evangelicals. But nowhere is this question more fraught than in African-American churches, says Tony Evans. He pastors the 9,000-member Oak Cliff Bible Fellowship in Dallas. One reason, he says, is cultural.

"The breakdown of the family is the single greatest challenge that we face today," he says.

Evans and others say the black family is in crisis — a majority of babies, for example, are born to single mothers — and that's why black ministers are often the most vocal opponents of same-sex marriage. Asked about the argument that this is a civil rights issue, Evans bristles.

Does that mean that homosexuality is a choice?

"The Bible is clear on that one, too. And that is, sexual relationships are to be between men and women within the context of marriage," Evans says. "That's not only related to the issue of homosexuality, but adultery, or fornication or bestiality. All of that is proscribed in the Bible."

Graylan Hagler, the pastor of Plymouth Congregational United Church of Christ in Washington, D.C., says "of course it's a civil rights issue."

Hagler notes that there are plenty of blacks who are gay, and they, too, should have access to the God-given institution of marriage. To him, legitimizing marriage for committed gay couples is precisely what the Bible envisioned.

"I just think of the words from Galatians where it says, 'There is neither Greek nor Jew, male nor female, slave nor free,' " he says. "And what is happening there is that they're pointing to what the kingdom of God looks like ... it's open to everybody and everybody has equal status."

Of course, conservatives say that the best blueprint for God's kingdom on earth does not spring from what you read between the lines of the Bible, but what you read in black and white.