Accessibility links
The Nation: Gay Marriage Caught Romney Off Guard President Obama's support for gay marriage surprised many people. Ben Adler of The Nation argues that the announcement caught presidential candidate Mitt Romney off guard, and is pushing him to talk more about social issues than he'd like. 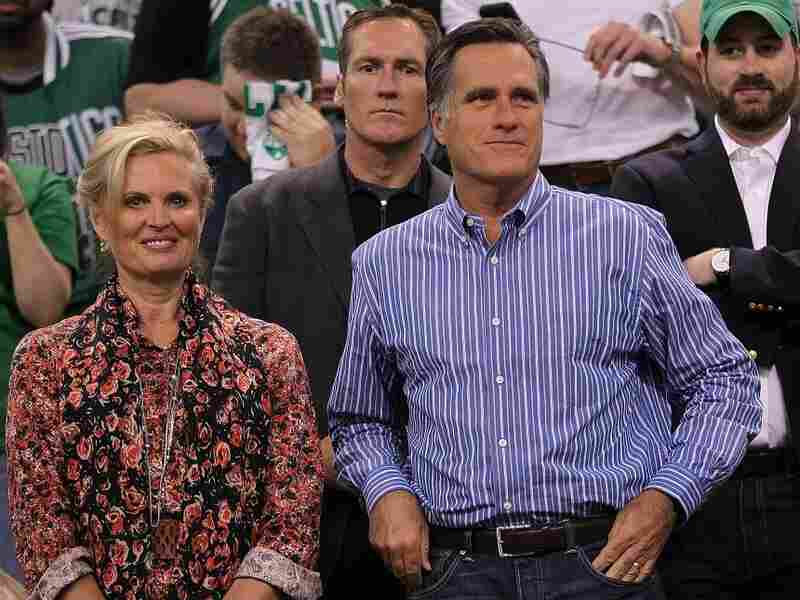 Republican presidential candidate Mitt Romney, sits in the stands with his wife Ann Romney before start of a game between Boston Celtics and the Atlanta Hawks at TD Garden in Boston, Massachusetts. Romney has said that he does not believe gay couples should marry. Jim Rogash/Getty Images hide caption 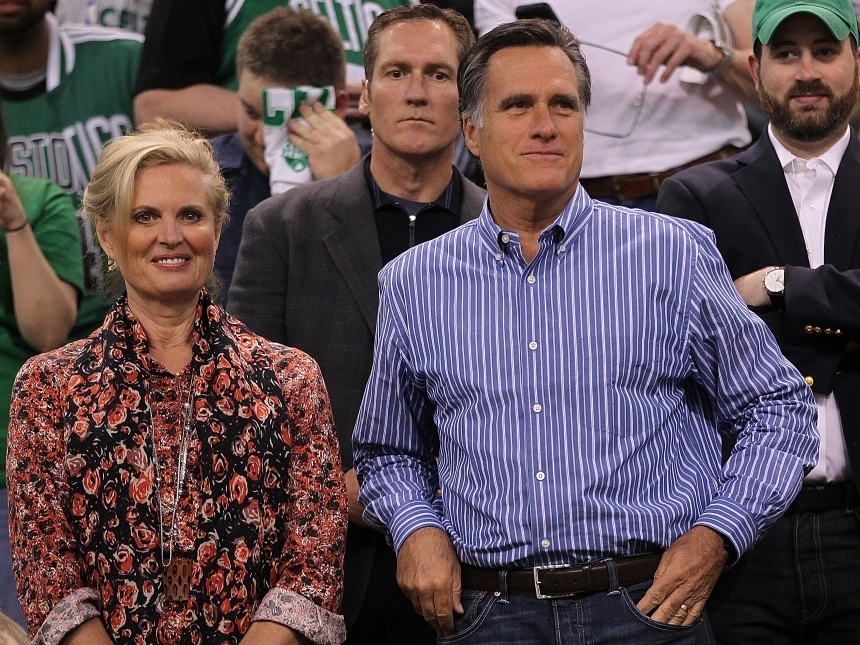 Republican presidential candidate Mitt Romney, sits in the stands with his wife Ann Romney before start of a game between Boston Celtics and the Atlanta Hawks at TD Garden in Boston, Massachusetts. Romney has said that he does not believe gay couples should marry.

Ben Adler is a writer for The Nation.

Conservatives can't seem to get their story straight on gay marriage. Some claim President Obama announced his support for marriage equality on Wednesday afternoon to gain political advantage. They reason that he wants to enthuse his base and distract attention from high unemployment. Others confidently predict that Obama has awoken the sleeping giant of socially conservative voters, and they will come out in November to punish him. Meanwhile, some concede that Republicans may not want to aggressively position themselves on "the wrong side of history," and still others declare that Obama has declared "war on marriage." And the latter two both work for Fox News.

Obama's move has thrown Mitt Romney's regressive position on marriage equality into stark relief. While Obama was already the most pro-gay rights president in history, Romney is actually further to the right than George W. Bush on gay marriage. Romney not only opposes gay marriage but also opposes civil unions that offer equivalent benefits to marriage. That means Romney would deny benefits such as hospital visitation rights to same-sex couples. Bush, on the other hand, supported civil unions, and his former vice president, Dick Cheney, supports gay marriage. Romney also supports a federal amendment to the Constitution that would ban gay marriage.

On other aspects of civil rights for gays and lesbians, Romney is a fairly standard Republican: he was against letting gays serve openly in the military, although he would not reverse the policy now that it has been changed. He opposes the Employment Non-Discrimination Act. And while he says that he does not discriminate in his own personal hiring practices, his openly gay foreign policy spokesman Richard Grenell resigned after being attacked by religious social conservatives and feeling that the Romney campaign was not publicly supporting him.

Any concerns that Romney will use gay marriage as a wedge issue to drum up evangelical voter turnout, as Republicans did in 2004, should be assuaged by the fact that Romney clearly hates talking about social issues. He has complained that he was forced to talk about them too frequently in the last campaign, and he has been known to begin answers to questions on social issues in debates by saying that instead of that subject he should be asked about the economy. He did that again in an interview with a local Colorado television station on Wednesday. After being asked about gay marriage, in-state public university tuition for the children of illegal immigrants and medical marijuana, he interrupted his interviewer and demanded, with audible irritation, "Aren't there issues of significance that you'd like to talk about? The economy, the growth of jobs, the need to put people back to work, the challenges of Iran; we've got enormous issues that we face." In other words, Romney thinks the only significant issues are the ones he prefers to discuss.

The Romney campaign did not issue any statement, press release or even blog post in response to Obama's comments. Romney did speak briefly on television, during which time he reiterated his standard talking point that "states are able to make decisions with regard to domestic partner benefits."

Other Republicans and conservatives were not so recalcitrant. Many of them are portraying Obama's move as mere election-year politicking. Rick Santorum, in an attempt to seize his last shred of relevance, put out a statement calling it "an attempt to galvanize [Obama's] core hard left supporters in advance of the November election."

"President Obama has consistently fought against protecting the institution of marriage from radical social engineering at both the state and federal level," said Santorum. "I will continue to fight to make sure that the cultural elites don't further undermine the institution that gives the best opportunity for healthy, happy children and a just and prosperous society."

Congressional Republicans have echoed those talking points, albeit in less hysterical language. "There appears to be a plan to try to distract Americans from the thing they care most about, which is too many people out of work and the sad state of the economy, and the runaway and reckless spending going on here in Washington," Texas Senator John Cornyn, who runs the National Republican Senatorial Committee, told Politico.

But social conservative leaders are unintentionally contradicting Santorum and Cornyn by arguing that Obama's embrace of marriage equality will actually be a boon to Romney. "Combined with his administration's opposition to the Defense of Marriage Act, it reveals a president who is tone-deaf and out-of-touch with the time-honored values of millions of Americans," said Ralph Reed, founder and chairman of Faith & Freedom Coalition. "This is an unanticipated gift to the Romney campaign. It is certain to fuel a record turnout of voters of faith to the polls this November."

Family Research Council President Tony Perkins went even further, arguing that Obama could harm himself even among minority voters:

As demonstrated by yesterday's overwhelming vote in North Carolina, redefining marriage remains outside the mainstream of American politics, especially in the critical battleground states and among minority voters. In North Carolina, the amendment received more than 60 percent of the vote in majority-black counties.

Considering that ten of the sixteen battleground states have marriage amendments that could be overturned by the President's new policy position on marriage, today's announcement almost ensures that marriage will again be a major issue in the presidential election.

The President has provided a clear contrast between him and his challenger Mitt Romney. Romney, who has signed a pledge to support a marriage protection amendment to the U.S. Constitution, may have been handed the key to social conservative support by President Obama.

Fox News seemed to be more in tune with Mitt Romney's desire to just make the issue go away. After a fairly cursory discussion of the topic, it moved on to covering John Edwards's trial. Anchor Shepard Smith reacted to the news by saying, "The president of the United States, now in the twenty-first century." He also wondered "if Republicans would go out on a limb and try to make this a campaign issue while sitting very firmly, without much question, on the wrong side of history on it." But his colleagues at Fox's website were simultaneously posting a piece with the nonsensical headline, "OBAMA FLIP FLOPS, DECLARES WAR ON MARRIAGE." Of course, a conservative might say Obama has declared war on traditional marriage. But to say he has declared war on marriage itself simply doesn't make sense, since he proposes not to eliminate the institution of marriage but to expand it. They later changed the headline to a more accurate, "OBAMA FLIP FLOPS ON GAY MARRIAGE."

It's fair to say Obama flip-flopped. But social progress has caused many Americans to flip-flop on any number of civil rights issues. This is only the most recent one, and it clearly caught Republicans off-guard.