Accessibility links
Romney Shifts Gears On Auto Industry Bailout Mitt Romney has very publicly opposed the government bailout of the auto industry. So the likely GOP nominee raised more than a few eyebrows this week when he said: "I'll take a lot of credit for the fact that this industry's come back." 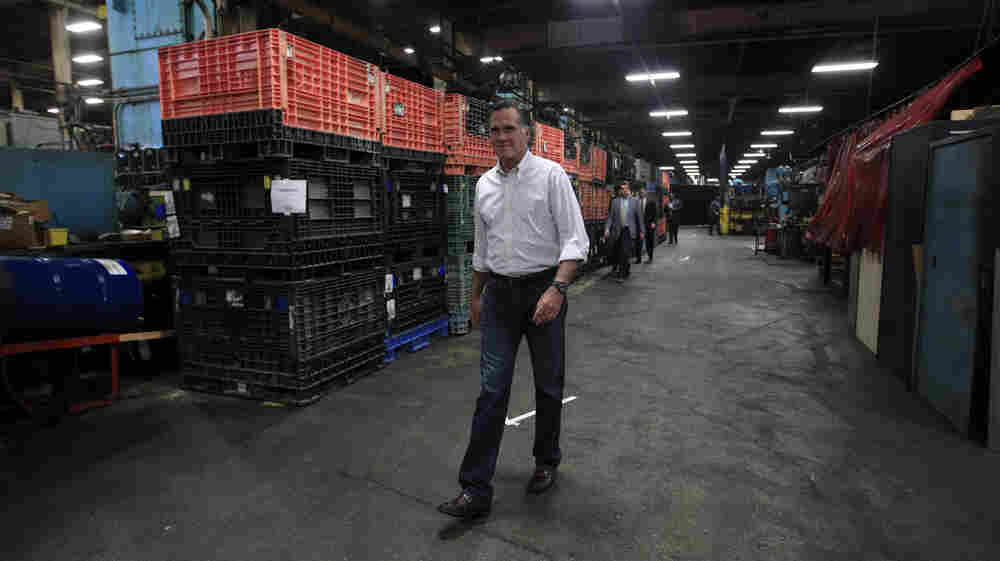 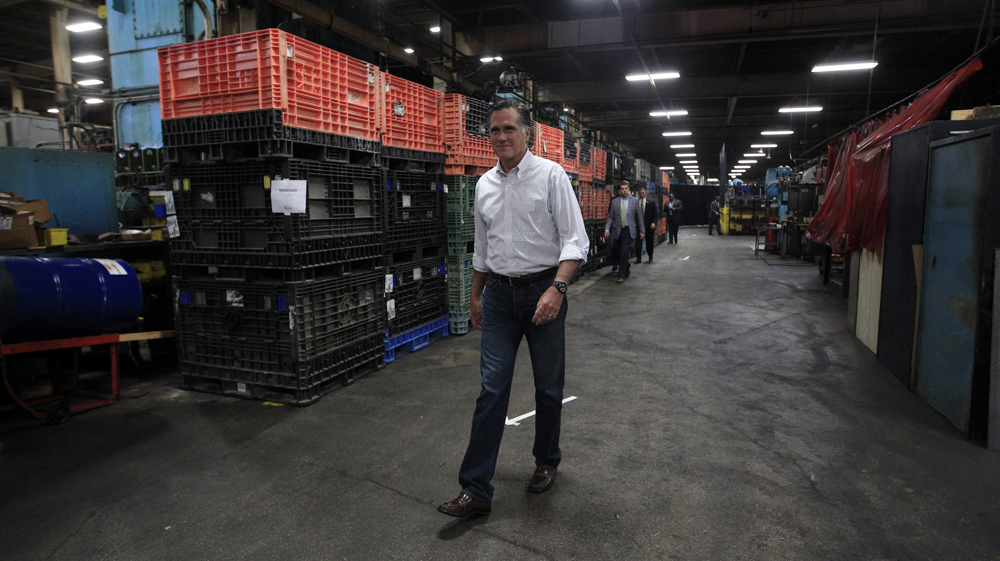 Mitt Romney is from Michigan, a state he has said he hopes to win in November. But the likely Republican presidential nominee has very publicly opposed the government bailout of the auto industry.

In 2008, when it was clear Chrysler and General Motors were in big trouble, he wrote a New York Times op-ed with the headline "Let Detroit Go Bankrupt."

Today the companies are back, making cars and making money. And now, candidate Romney says it was his idea all along.

Talking about the auto bailout in an appearance on WEWS-TV in Cleveland this week, Mitt Romney said he would "take a lot of credit for the fact that this industry's come back."

In an appearance earlier this week on Cleveland's WEWS-TV, Romney raised more than a few eyebrows when he said: "I pushed the idea of a managed bankruptcy and finally when that was done and help was given, the companies got back on their feet. So I'll take a lot of credit for the fact that this industry's come back."

It's true that in his 2008 editorial, Romney suggested the idea of a managed bankruptcy. He says it was a mistake for the Bush administration and later the Obama administration to give the automakers money before they went into bankruptcy.

In November, during a debate sponsored by CNBC, Romney said he would have had "the private sector guiding the direction as opposed to what we had, with the government playing its heavy hand."

He explained his vision in a CNBC-sponsored debate in November 2011. "[In] my plan, we would have had a private-sector ... restructuring and bankruptcy, with the private sector guiding the direction as opposed to what we had, with the government playing its heavy hand."

Bob Lutz, a retired vice chairman of GM and author of the book Car Guys vs. Bean Counters: The Battle for the Soul of American Business, was at GM at the time of the crisis.

"Frankly, what we told ourselves at General Motors was we're sure he's a good governor, but he doesn't know what he's talking about in this instance," Lutz says.

Lutz says he and other executives wrote off Romney's idea of a private-sector restructuring for one simple reason.

Ultimately, GM and Chrysler did go through managed bankruptcies — managed by the government with taxpayer dollars. In the months since that November debate, Romney has changed his emphasis, saying he was also open to the idea of government guarantees — though not government checks — to help the companies emerge from bankruptcy.

Lutz describes himself as a conservative and a Republican and he's no fan of President Obama — that is, except in the case of the auto rescue.

"He just went in and he put the right team together and he got it done and the results are there for all to see, and I think you have to give credit where credit is due," Lutz says.

And, despite his own personal political leanings, Lutz says it's not due to Romney.

"I hope he carries Michigan, but to me there's something not quite right about a political system that will rely on modifications of the truth in order to get the political job done," Lutz says.

Another person who was deeply involved in the auto bailout is Steven Rattner. He was the lead adviser to the president and the Treasury secretary, and was known as the "car czar."

"Oh, I have seen the quote," Rattner says, but he isn't sure how Romney can, as the candidate said earlier this week, "take a lot of credit" for the industry's comeback.

"We, of course, had absolutely no contact with him during this. We were unaware of any views he might have had. I know he wrote a piece for The New York Times in '08, but we really hadn't paid any attention to it," Rattner says. "So this idea that he now is taking credit for it does boggle the mind."

Obama this week described it as one of Romney's "Etch-A-Sketch moments." For his part, Romney points back to that 2008 editorial, saying he was right all along.