Accessibility links
'Berlin Sampler': Documenting Berlin's Rebellious Music History Kaffee Burger in Mitte recently hosted a launch for Berlin Sampler, a book that traces over 100 years of musical works in Berlin and the events that shaped them. 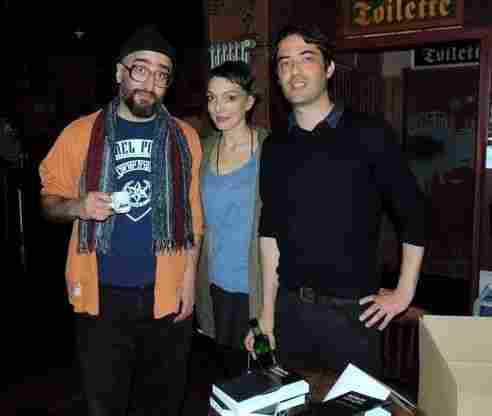 Kaffee Burger in Mitte recently hosted a book launch for Berlin Sampler, a book that traces over 100 years of musical works in Berlin and the events that shaped them.

Berlin Sampler touches on everything from Dada, Deutsche Chanson, Cabaret, National Socialism and jazz, to surf rock in East Berlin, Nena, and techno.

"It's theoretical but also personal. That's a hard thing to balance. It takes high points in music and some things he's interested in and analyzes them. Certainly the history of Berlin punk in the 80's and post-punk has been under-represented in English. I think it's great he shines a light on that," Strauss says.

The author, Théo Lessour, who is French, wrote the book in his native language. Nadja Vancauwenberghe, Editor-in-Chief at Exberliner, who is also French, read the book in its original version and wanted to co-publish it in English.

"I was really impressed. I thought it was very savvy, intelligent, encyclopedic - but at the same time very colorful with a lot of little anecdotes and nice little insights. It's amazing because we just started introducing it to bookshops, and everyone is taking it. Everyone loves it," Vancauwenberghe says.

Lessour describes himself as a former punk and says he studied law in order to be productive and make his parents happy, but he just never really felt like a lawyer.

"I sort of came to Berlin to accomplish this. It was a big issue in my life. I had the feeling of not achieving anything. After I finished this, I feel like I had achieved something," Lessour says.

Berlin Sampler took two years to write. Lessour had to learn German in order to read German books and research online. In the course of his research, he came across a few unexpected facts.

"The thing that surprised me the most- it is one of my favorite chapters in the book- is about the jazz in the Hitler time and this movement called the swing movement, which was crazy party animals."

When asked if there's is one red line throughout Berlin's music history, Lessour says he sees a trend of defiance against technicality, or music ability.

"I think it is very widely expressed in the Berlin music and, strangely, if you look back in the old days, it is already expressed- this idea of being not so good, purposely not so good. That is extremely Berliner."

Berlin is known for being a bit of a rebel city. According to Lessour, this trend of doing things its own way dates back 100 years - at least in music.