Accessibility links
From Iowa To Russia, Tractors Build Economic Bridge Russia has one of the world's 10 biggest economies, but it isn't even among the top 30 U.S. trading partners. A new John Deere plant there shows the complications of that relationship. To avoid tariffs, tractors and combines are built in Iowa, then taken apart and shipped to Russia, where they're reassembled. 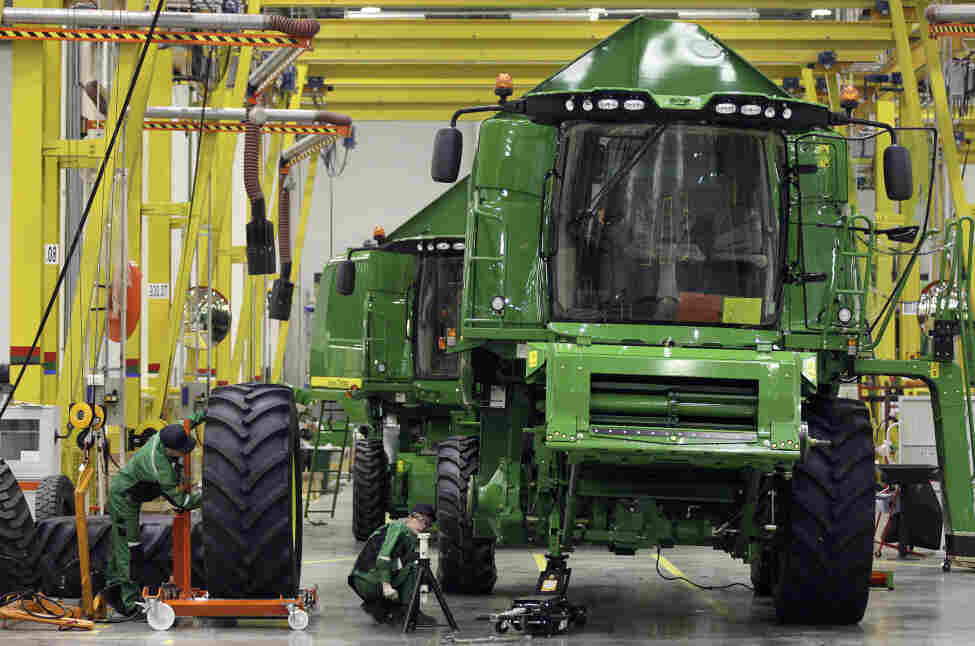 Employees fit a tire to a John Deere W540 combine inside the company's Domodedovo manufacturing center near Moscow, Russia. The tractors are built in Waterloo, Iowa, and then taken apart and shipped to the Russian plant for reassembly. Bloomberg via Getty Images hide caption

The green is unmistakable at a plant in Russia as workers put together a John Deere tractor. The roughly 90 employees, however, don't actually make the tractors.

The engine, the drive train and the tractor itself are all built in Waterloo, Iowa. The completed tractor is tested, and then it is disassembled and prepared for shipment.

"We crate it, and we send it to Russia in an oceangoing container, and then we reassemble it here, test it and distribute it to the Russian market," explains David Larson, general director of John Deere Russia. The local assembly means lower tariffs than for importing a finished tractor.

Russia is one of the 10 biggest economies in the world, but it isn't even among the U.S.'s top 30 trading partners. That anomaly is something that both sides want to fix. 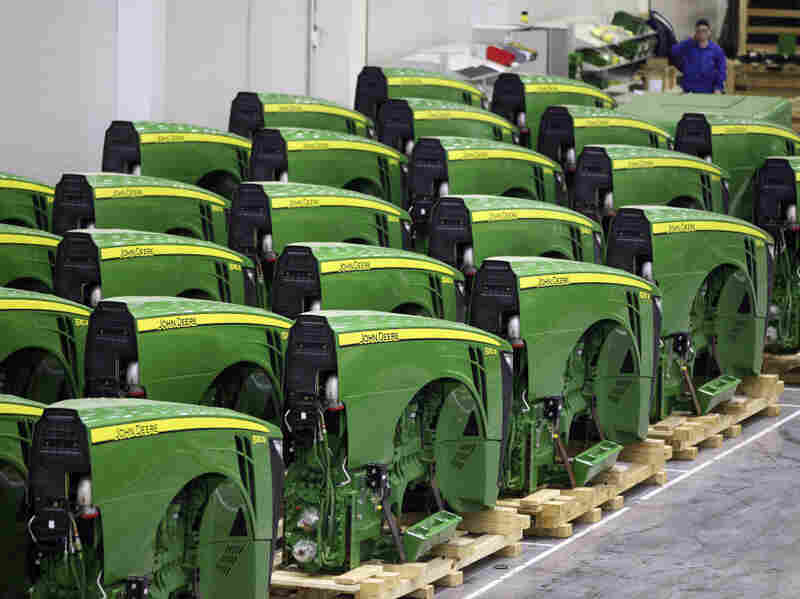 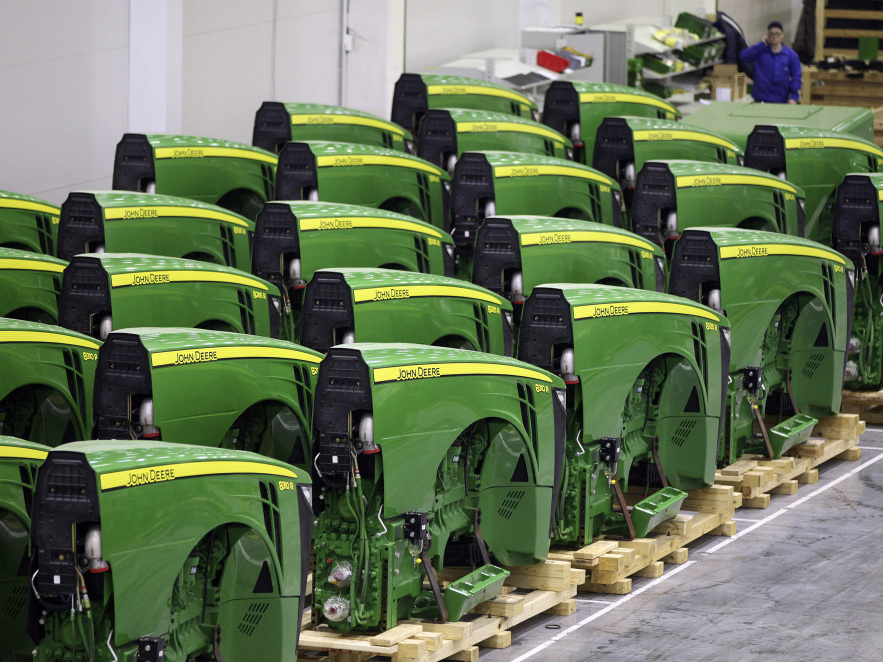 The John Deere plant, a big box of a warehouse near Domodedovo, about a 30-minute drive south of Moscow, opened two years ago. Despite Russia's reputation for red tape and corruption, Larson says it took just nine months to get up and running.

"That amount of time would be very good in any market in the world," he says.

It may have been fast, but it wasn't necessarily easy.

"We had more than 240 certifications and inspections that we had to go through to build that factory," he says. "As long as you know what needs to be done, the bureaucracy here is pretty effective."

Many Russians might say officials here are most effective at padding meager state salaries with bribes. John Deere is the subject of an SEC investigation for allegedly violating the Foreign Corrupt Practices Act in Russia and neighboring countries. The company says it is cooperating with the Securities and Exchange Commission and that the probe does not mean it has done anything wrong.

John Deere did have high-level government support when setting up the $50 million plant, its second one in Russia. The former Soviet region and Central Europe account for 5 percent of the company's total sales — about $1.4 billion.

Machines For Farms And Forestry

Modernizing agriculture is an important part of Russia's efforts to diversify its economy away from oil and gas. On farms in the former Soviet Union — which has 300 million acres of farmland — modernization means machines.

Adam Fleck, who studies this sector for Morningstar Analytics, says tractor sales are up 50 percent so far this year. John Deere's big tractors are a good fit for Russia's big — and increasingly high-tech — farms, he says. The company's tractors and combines come with the latest GPS satellite tracking.

"What's really great, I think, from Deere's perspective on the Russian market is that it offers a lot of growth in the high-horsepower tractors as well," Fleck says. "It's a very under-invested country historically, so there's a lot of opportunity to re-mechanize farmland there."

Russia is also home to a quarter of the trees on Earth, and John Deere also assembles forestry and construction equipment here.

Mikhail Andriyukhin, a team leader on the tractor assembly line, is young, like most of his colleagues, and embraces the Western work ethic.

"At a Russian manufacturer, I think they let through a lot of defects, compared with American companies," Andriyukhin says. "Here, you don't hide things, and if something is broken, you need to come and say it's broken."

That sort of thinking is a shift for Russia. Andriyukhin may not wear a suit and tie at a Moscow investment bank, but he is part of the new Russian economy, too.