Accessibility links
The Price Of A Swift Pigeon: Try $328,000 Growing Chinese wealth has driven up prices dramatically in a wide range of markets — including the market for racing pigeons. Chinese love the sport, and the wealthy have pushed up prices for the fastest birds to exorbitant levels. 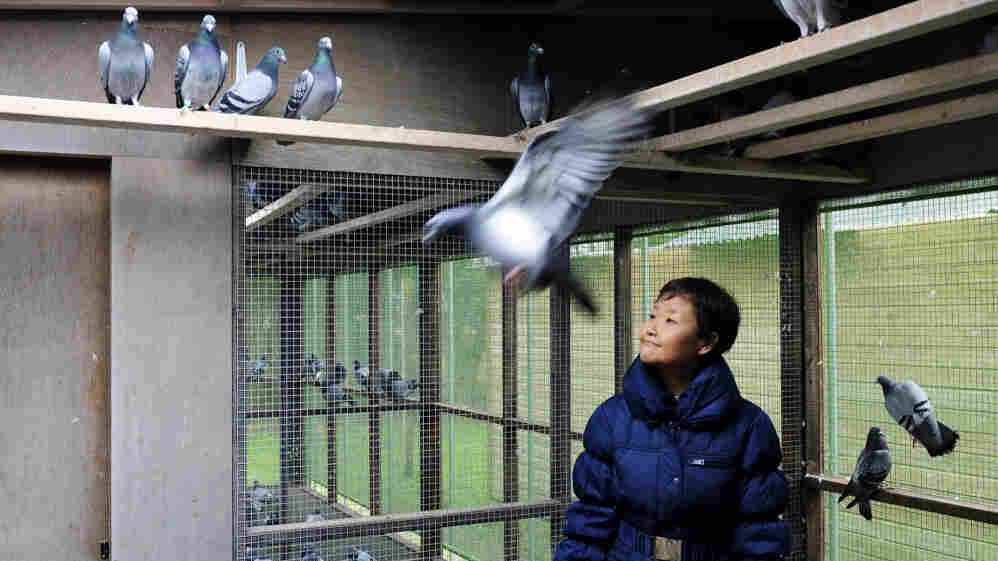 Chinese buyers are driving up the prices of racing pigeons to astronomical levels. One buyer paid $328,000 for a single bird earlier this year. Belgium, however, remains the center of pigeon-breeding. Here, Yi Minna, the chief operating officer at the Pipa pigeon auction house, is shown in Knesselare, Belgium, last year. Geert Vanden Wijngaert/AP hide caption

To the average observer, they look like ordinary pigeons, caged into a balcony in a high-rise Beijing apartment. But make no mistake. These cooing birds, according to breeder Yang Shibo, are like top-of-the-line sports cars.

"These are the Ferraris of the bird world," he says. "They're the most expensive, and the fastest."

The price of racing pigeons is soaring sky-high, pushed up by wealthy Chinese buyers.

These are the Ferraris of the bird world. They're the most expensive, and the fastest.

It's the latest market to be inflated by the China Effect — or massive demand from China — which has pushed up commodity prices on everything from Australian iron ore to Brazilian soybeans.

Today the prize money for races is increasing exponentially, especially in the popular "one loft races."

This refers to a system where owners consign their pigeons to a loft at around five weeks of age, and the lofts are responsible for both training and racing the birds.

This year, the Diamond Elite Race of 300 miles, held by one particular loft, is awarding a first prize of a staggering 10 million yuan ($1.5 million), which can also be exchanged for a house. The entrance fee is almost $8,000. 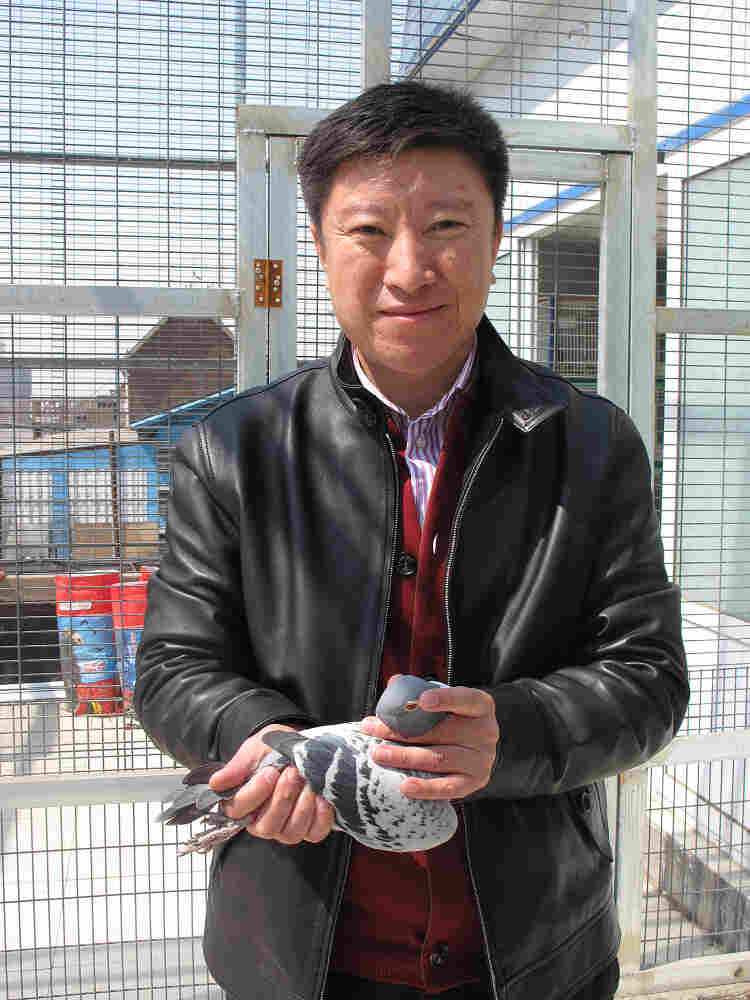 Xing Wei, who raises pigeons for lucrative races in China, is shown in Beijing with his favorite bird, Ike. He sells Ike's offspring to wealthy buyers for $15,000. Louisa Lim/NPR hide caption 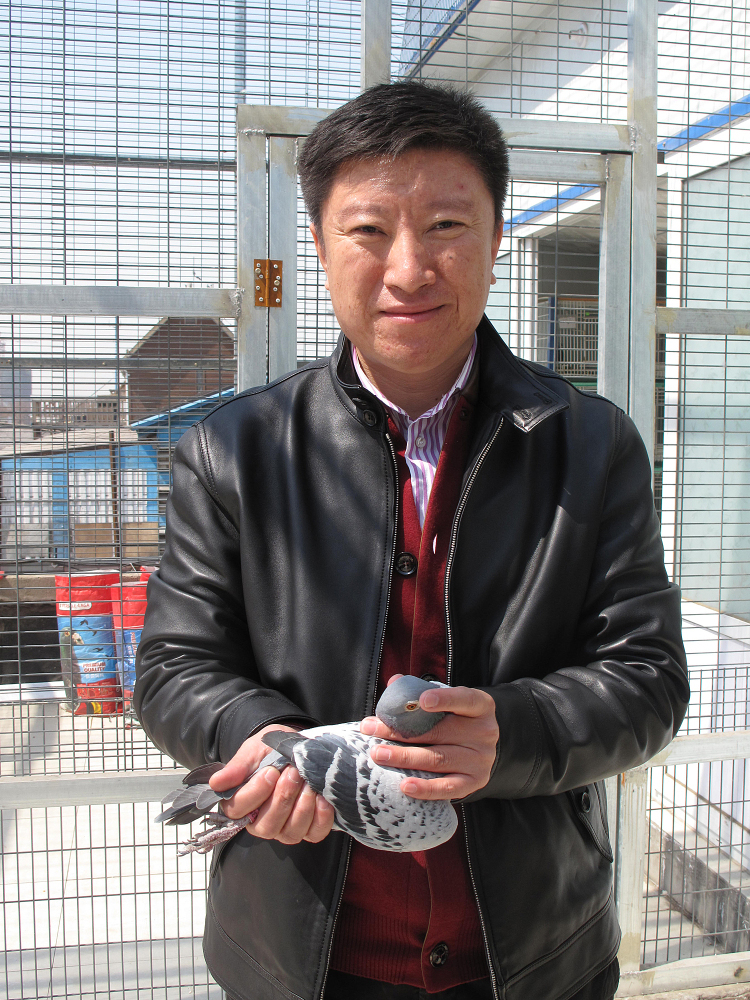 Xing Wei, who raises pigeons for lucrative races in China, is shown in Beijing with his favorite bird, Ike. He sells Ike's offspring to wealthy buyers for $15,000.

Good pigeons come with family trees going back five generations, like pedigreed racehorses. Indeed, pigeons are in many ways the racehorses of China.

Yang is not fazed by soaring pigeon prices, arguing it's good for the development of pigeon racing in China.

Indeed, the highest price ever paid for a pigeon was 250,000 euros ($328,000) earlier this year by a Chinese buyer. Chinese make up half the customers at Belgium's premier pigeon auction house, Pipa, up from 18 percent six years ago.

Luna Lai, Pipa's Greater China manager, estimates that the influx of Chinese money means the price of an average pigeon has doubled in a couple of years.

"I think the main reason is they are buying for status. You are rich, you have a super one, I want to buy a super one, too," says Lai.

She admits the market is overheated, but doesn't believe it will collapse.

"Somehow the market is really very hot — too hot — but there's still a lot of Chinese rich buyers, and they still want to buy," she says. "People will say it's like an economic bubble, but I think unless China's economy goes downhill, I don't think it's a pigeon bubble yet."

Many of the Chinese buyers are similar to Xing Wei: young, rich entrepreneurs, who go to Europe every year to buy top-flight, world-class pigeons. Xing pays astronomical prices for his birds, which he asked us not to disclose.

Like so many other wealthy Chinese, his fortune is, in part, from real estate deals. And Chinese real estate money, he says, is driving the pigeon market,

"The price of birds imported from Europe to China rises and falls along with the Chinese real estate market," he says. "It follows the same trend lines."

Pigeon fanciers flock to his loft in Tangshan, about 100 miles from Beijing.

On this day, one man has come 700 miles to buy a pigeon for his boss. A single squab, or baby pigeon, bred from Xing's best bird — a Belgian champion racer called Ike, who no longer races but is used for breeding — costs $15,000. 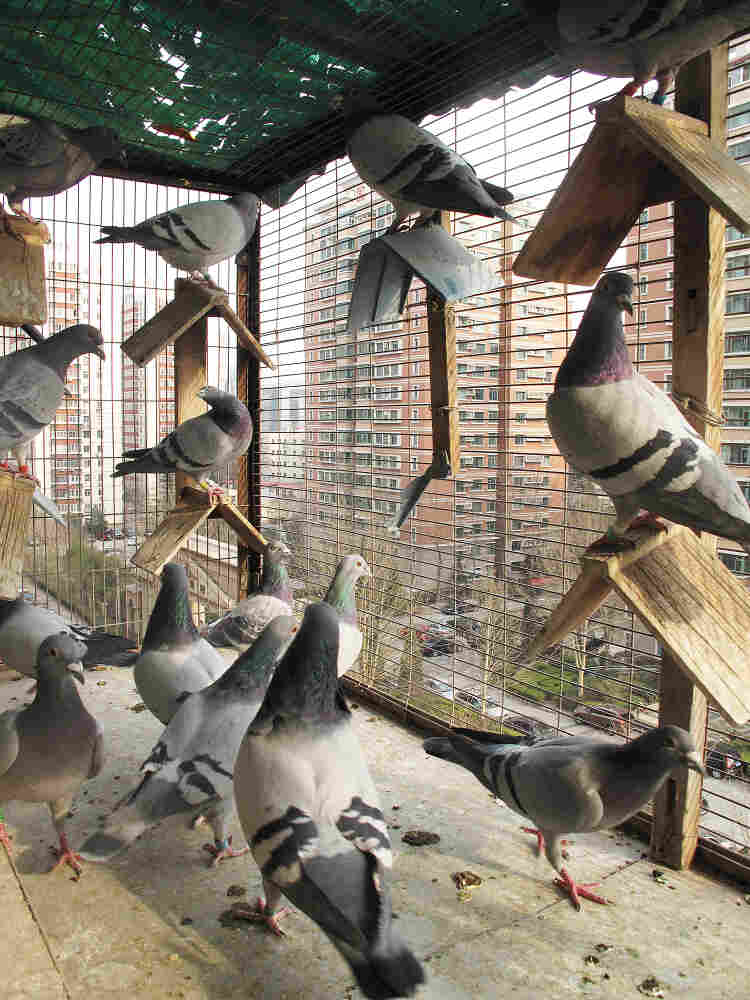 These pigeons belong to Yang Shibo, who breeds them in an enclosed balcony on the 13th floor of a Beijing apartment building. His best bird cost him $1,000; its descendants have earned him $150,000 in prize money. Louisa Lim/NPR hide caption 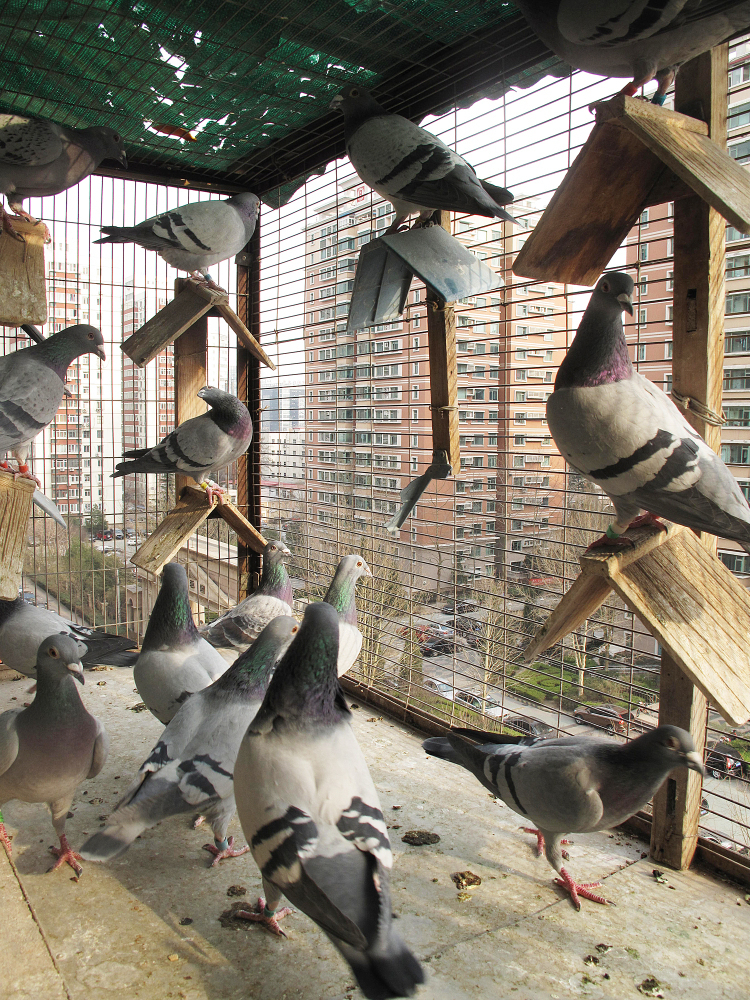 These pigeons belong to Yang Shibo, who breeds them in an enclosed balcony on the 13th floor of a Beijing apartment building. His best bird cost him $1,000; its descendants have earned him $150,000 in prize money.

Xing's pigeons live in coops on top of his company headquarters. He has three full-time pigeon trainers, one of whom specializes in training birds for flights, while another oversees the breeding program.

Only The Swift Survive

Xing says he has bought 2,000 birds from Europe. He's so determined to raise a flock of superpigeons that he admits his trainers sometimes kill inferior birds, in an act of pigeon eugenics.

Xing is scathing about China's pigeon races, saying most of the lofts that organize the "one loft races" are dishonest.

"It's not corruption, it's just the market is chaotic," he says. "The majority of the races — 90 percent — are not fair. There are lots of things these lofts do, like letting out a bird by itself, instead of together with the other birds. Some people use steroids."

Pigeon fanciers love to amaze with pigeon facts: that male and female pigeons take turns incubating the eggs. That both males and females produce pigeon milk to feed their young.

Xing is no exception, and his eyes shine as he describes his favorite birds. But his love for pigeons was nurtured by a personal tragedy: He was given his first pigeon at age 5, after a massive earthquake killed 240,000 people in his hometown, Tangshan.

"There was devastation everywhere, all the houses were flattened," Xing remembers. "From then on, I thirsted for and valued life. Then an elderly neighbor gave me a pigeon. It felt like it was destiny."

That year, 1976, was the first that pigeon racing was allowed after the Cultural Revolution, during which time it had been forbidden for its capitalist tendencies.

In less than four decades, Chinese buyers have come from nowhere to set the price for the world's best pigeons. The anti-China backlash has begun, with European buyers complaining about being priced out of the market.

With racing pigeons — as in so many other commodities — China's hold on the market is beginning to rattle the wider world.