Accessibility links
A Fleeting Memory Of Carlos Fuentes The Mexican literary legend's passing this week spurred a particular recollection from NPR's Linton Weeks, who spent time with him in 1995.

A Fleeting Memory Of Carlos Fuentes

A Fleeting Memory Of Carlos Fuentes 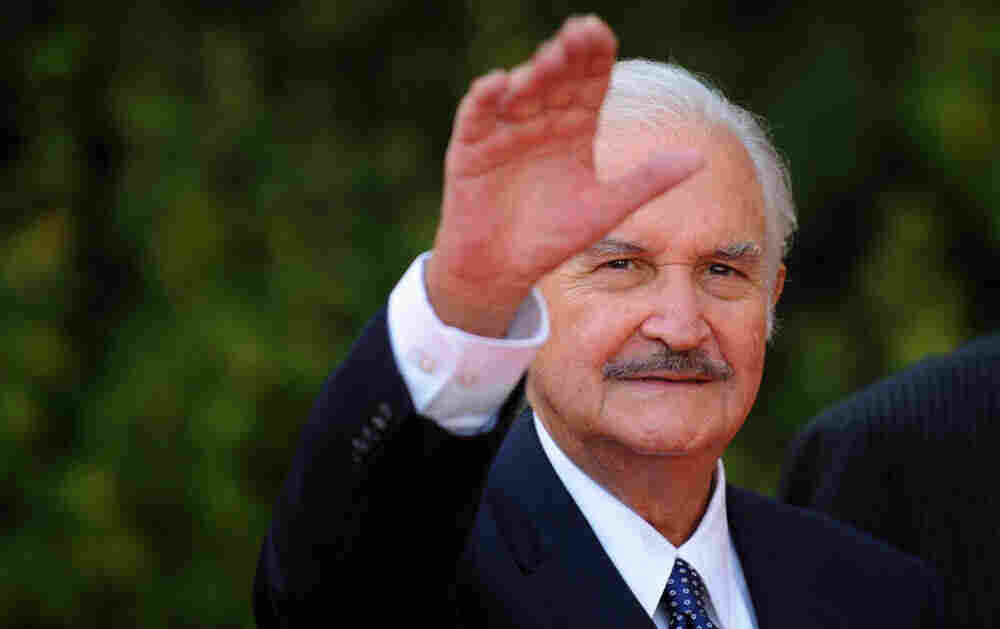 When I heard that the Mexican literary legend Carlos Fuentes died Tuesday at 83, I remembered a long, easygoing interview I did with him years ago. We talked about many things — including what epitaph he wanted carved on his tombstone.

It was the autumn of 1995 and I was a reporter at The Washington Post, assigned to write a profile of the elegant, eloquent Fuentes. I draw on that story now, for twice-told tales worth telling.

He had come to Washington, D.C., to receive the Mexican Cultural Institute Award and to read from one of his two-dozen or so novels at the Smithsonian Institution.

The award ceremony was held at the cultural institute on 16th Street in a mansion that had once housed the Mexican Embassy. Fuentes said the occasion was especially meaningful because he was accepting it in the very same space where he had lived and played as a youngster some 60 years earlier. His father had been a Mexican diplomat in Washington while Fuentes was in elementary school.

At one point, Fuentes pointed out a decades-old mural on a nearby wall. It was a sweeping portrait of Mexican progress. Beautiful men and women on horseback were in a line along a dirt road. In the foreground, there was a handful of children. Everyone in the mural was focusing on a parade of tractors rolling into the landscape. Everyone, that is, but one of the little boys, in overalls and straw hat.

Of all the characters in the mural, the young dark-haired boy was the only one looking in a different direction. He was glancing back at a pretty, pigtailed girl beside him. He was watching the watchers.

The model for the little boy, Fuentes told me, was Carlos Fuentes.

'Everything Ends In Literature'

He wound up following his father into diplomacy and, of course, becoming one of the greatest writers of his generation, along with his friend Gabriel Garcia Marquez. The books of Fuentes were — like the man himself — a melange of age and youth, politics, philosophy, popular culture and sexuality.

Drawing his portrait for The Post, I described him as movie-star suave and good-looking. His cologne smelled of limes. The hair behind his temples was brushed back and, as I wrote then, looked like small silver wings above his ears. His gray mustache was supergroomed. To me, he looked like William Faulkner or Claude Rains in Casablanca.

During our hours together, over a couple of days, I asked him about many things:

What is the trick of describing someone? "I use a lot of film images, analogies," he said. "And imagination."

I asked him about his writerly fascination with sex. "Sex," Fuentes said, "as anything else in life, is an avenue to literature. Without literature, it would have no meaning. I am a literary animal. For me, everything ends in literature."

He told me of a recent visit to author William Styron's house on Martha's Vineyard. Fuentes was dining with Styron and Bill Clinton, who was president at the time, and Garcia Marquez. Clinton asked the three writers which book they wished they had written. Styron said The Adventures of Huckleberry Finn. Marquez said The Count of Monte Cristo. "I was about to say Don Quixote," Fuentes told me. "But I wanted to take the president to the South. I bit my tongue and said, Absalom, Absalom."

Fuentes had a sly wit.

I asked him to name the five greatest novelists of the 20th century. He would pinpoint only those who were dead:

William Faulkner. "The great tragic writer. He's the only Latin American writer I'm going to name," he said and laughed.

James Joyce. "He opened up all the possibilities of language, of reinventing the world through language."

And who is No. 5, I asked? "I think I'll leave a blank," he said and shifted uncomfortably in his seat.

Together, we took a nostalgic tour of his Washington. I drove because Fuentes said he didn't know how to. We motored around the neighborhood of his childhood and he wistfully recalled the homes where his family lived, the park where he frolicked, the school he attended, the movie theater where he spent Saturdays watching movies.

As the sun arced across the fall sky, I asked Fuentes how he would like to die. "Peacefully, in my sleep," he says. "I do not want excessive drama. One hopes it's quiet." He died in a Mexico City hospital.

He told me that he and his wife, Silvia Lemus, had been talking about where they wanted to be buried. Back then, Fuentes was leaning toward the Montparnasse cemetery in Paris. "I think," he said, "that would be a great place to spend eternity."

And, I asked him, what do you want on your tombstone? He said he wanted to think for a while before answering.

At the end of the interview, Fuentes told me to drop him off near "that bookstore with the coffee shop" on Dupont Circle.

Will people recognize you in Kramerbooks? I asked him. "Not until I use my credit card," he said.

As he eased out of the car and began strolling away, I stepped to the sidewalk to watch him go. He stopped for a moment, still within earshot, and called out an answer to my question about his tombstone: "Who was it who said, 'It's too deep for me'?"