Accessibility links
Latino Voters: Seen, But Will They Be Heard, In 2012? Now the fastest growing voting group, Latinos have never been so heavily courted in a presidential race. They could play a key role in battleground states in the 2012 elections. 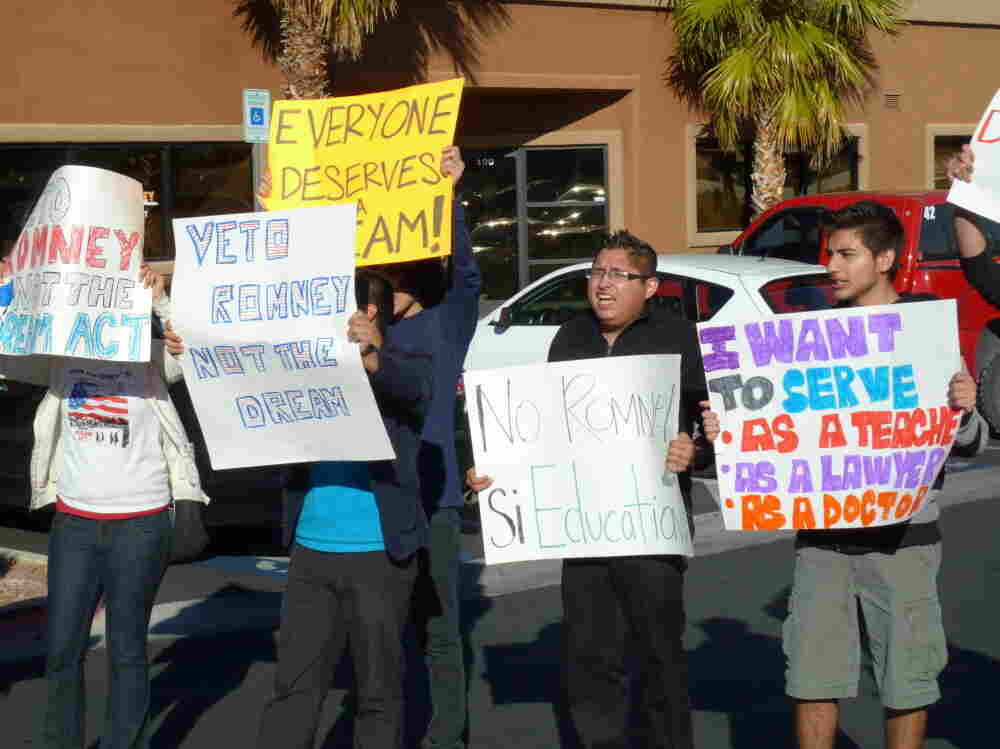 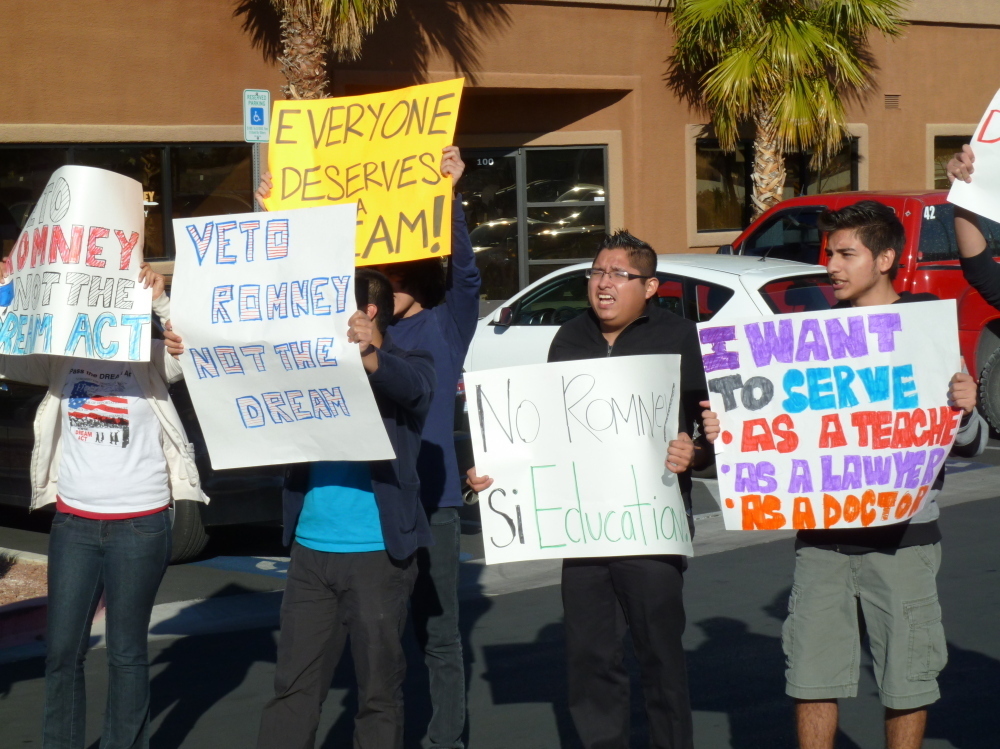 Latinos protest Mitt Romney's opposition to the Dream Act, outside his campaign headquarters in Las Vegas on Feb 2.

If young voters were the breakout stars of the 2008 presidential election, then Latino voters may take center stage this year.

Every other week or so, it seems, a new poll gauges Latinos' opinions about the candidates, the issues and their level of engagement. Both parties are pouring millions into their Latino outreach. Latino politicians have assumed prominent roles in the conventions of the Republican and Democratic parties. And a Latino senator is on the short list of potential running mates for presumptive Republican nominee Mitt Romney.

Latino voters arguably never have received this much attention so early in a presidential election. It's a new reality for America's largest minority group and fastest growing bloc of voters.

But, for Latino advocates, the heightened interest won't matter much if their concerns don't move to the front burners of the two parties.

"If you are truly looking to be competitive at the national level, there's no way you can continue on the path of ignoring Latino voters," says Clarissa Martinez, director of immigration and national campaigns for National Council of La Raza, the oldest Latino civil rights group in the U.S. "Latinos now are asking the question, 'OK, so what are you going to do? We appreciate you stopping by. We had the pictures [taken]. We had the words in Spanish [from candidates]. When do we get to the policy stands that are actually acted upon?' "

A Focus Beyond Immigration

Latinos are frustrated with both parties for failing to enact an immigration overhaul, one of candidate Barack Obama's 2008 campaign promises. They are also angry at the Obama administration for processing a record number of deportations over the past three years.

On Thursday, coordinated protests planned in presidential battleground states will demand that Obama exempt Dream Act-eligible young people from deportation. (The Dream Act, which failed to pass the Senate last year, would provide a path to citizenship for young people brought illegally to the U.S. as children if they attend college or serve in the military.)

Education is another issue important to Latinos but not prominent so far on the campaign trail. A poll released Tuesday, by the American Federation for Children and the Hispanic Council for Reform and Educational Options, found that 58 percent of Latinos in five battleground states want to "hear more from the presidential candidates on how they will improve education." By comparison, only 49 percent of all respondents agreed.

Latinos polled also ranked the economy and jobs as their top concerns, followed by the federal deficit and education.

There's much more to gaining ground with Latino voters than immigration.

An estimated 22 million or more Hispanics will be eligible to vote in 2012. Many projections put their voter turnout in November as high as 12 million, which would be a record and a 26 percent increase from 2008.

Latinos could be especially important in battleground states with large Hispanic populations, such as Florida, Nevada, New Mexico and Colorado, where their strong turnouts on Election Day could determine outcomes in congressional races as well as the presidential contest.

"I think Latinos have been accustomed to the attention of candidates since the late 1990s and then them disappearing after," says Stanford University political scientist Gary Segura, a principal in the polling group Latino Decisions. "The 2012 emphasis may be a function of what happened in 2010 — the only places where Republicans lost [elections] were in places with huge Latino numbers, like in Colorado, California and Nevada."

President Obama was the first in U.S. history to win the office without capturing a majority of white voters. Given his unpopularity among white men, he's pinning his re-election hopes again on a coalition anchored by African-Americans, young people and Latinos. Recent polls have shown Obama's support among Latinos hovering above 70 percent.

Romney is hoping to repair his party's relationship with Latinos enough to skim away support that offsets Obama's advantage. An impreMedia and Latino Decisions poll from December found 46 percent of Latinos believe Republicans "don't care too much" about them, primarily because Republicans, including Romney, generally support tough immigration enforcement and oppose creating a path to citizenship.

Republicans hope their efforts to cast Obama's economic policies as a failure will resonate with Latinos, whose unemployment rate is at 10.3 percent, compared with 8.1 percent for the nation.

And the Republican State Leadership Committee is investing $3 million into the recruitment of 100 Hispanic candidates for state legislative seats across the nation in 2012.

The Obama campaign and the Democratic Party have robust outreach machines that are beginning to crank up. Last week, the Obama campaign released a second set of Spanish-language ads playing on television and radio in Colorado, Nevada and Florida — three battlegrounds where Latinos could make the difference.

Some Latinos see progress in their issues getting addressed. One example is the Obama administration's decision last year to adjust deportation guidelines to prioritize a smaller pool of illegal immigrants — those who have committed serious crimes.

And Republicans are trying to moderate their harsh rhetoric on illegal immigration. Sen. Marco Rubio of Florida recently floated details of his own version of the Democrat-supported Dream Act. Rubio, the son of Cuban immigrants and rumored to be a possible Romney running mate, says he's drafting a bill that would issue nonimmigrant visas rather than citizenship.

"You're seeing more of a consumer-based vote — the Latino isn't just being addressed; he's being accommodated, even on the immigration issue," says Democratic strategist Gus Garcia, who co-chaired Latino outreach for Hillary Clinton's 2008 presidential campaign. "It's the pressure from the community driving them to come up with policies that address Latinos."

Garcia says Latino leaders took note of Obama's announced support for same-sex marriage as evidence that he gave in to gay rights advocates, demonstrating that if Latinos continue to lobby Obama, "he can be pressured to make a change."