Accessibility links
What Killed Orca Victoria? Some Point To Naval Tests The U.S. Navy is in the process of renewing its permits to conduct sonar and explosive tests off the coast of the Pacific Northwest. But the recent unexplained death of a young orca who washed ashore in February has thrown a wrench in the process. Experts say injuries to the whale may indicate she was exposed to an underwater explosion or sonar testing. 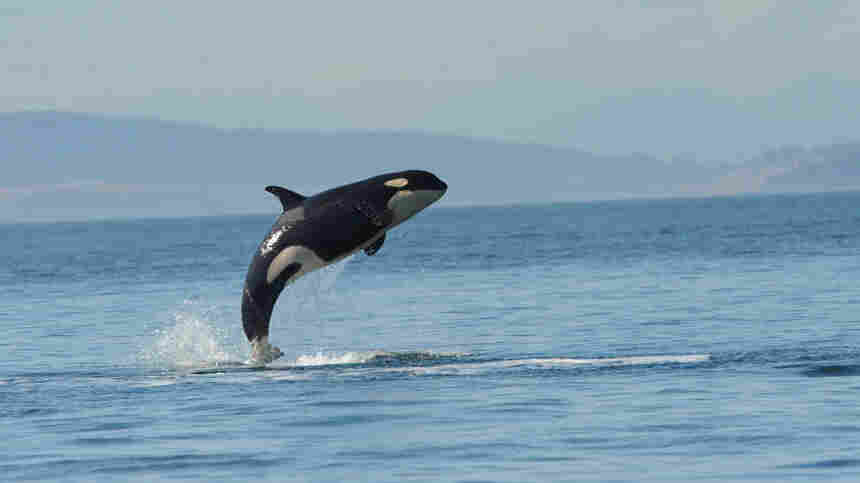 Orca L112, also known as Victoria, was 3 years old when she washed up on the Washington coast. An investigation into her death has been inconclusive. Center for Whale Research hide caption

Few people know the orcas of Puget Sound as well as Ken Balcomb.

A researcher with the Center for Whale Research on Washington state's San Juan Island, Balcomb has been studying the whales for more than 30 years.

It takes Balcomb only a few seconds of listening to the squeaks and whistles of underwater whale recordings to recognize the different pods of orcas.

In one recording, Balcomb identifies the group known as the L Pod — the family many people in the area are talking about right now.

Orca L112, also known as Victoria, was a 3-year-old L Pod female who washed up dead on the Washington coast in February.

Victoria was one of about 85 endangered resident killer whales left in Puget Sound. The nature of her injuries has some whale experts suspicious that naval activity could be the cause of her death. 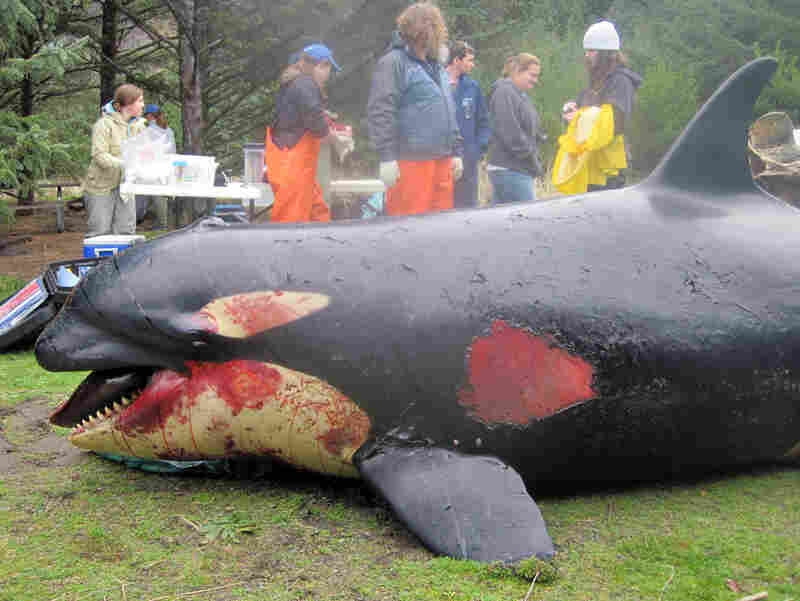 Victoria's body had suffered blunt trauma and bruising. An investigative team says the whale was healthy when she died. Cascadia Research/AP hide caption 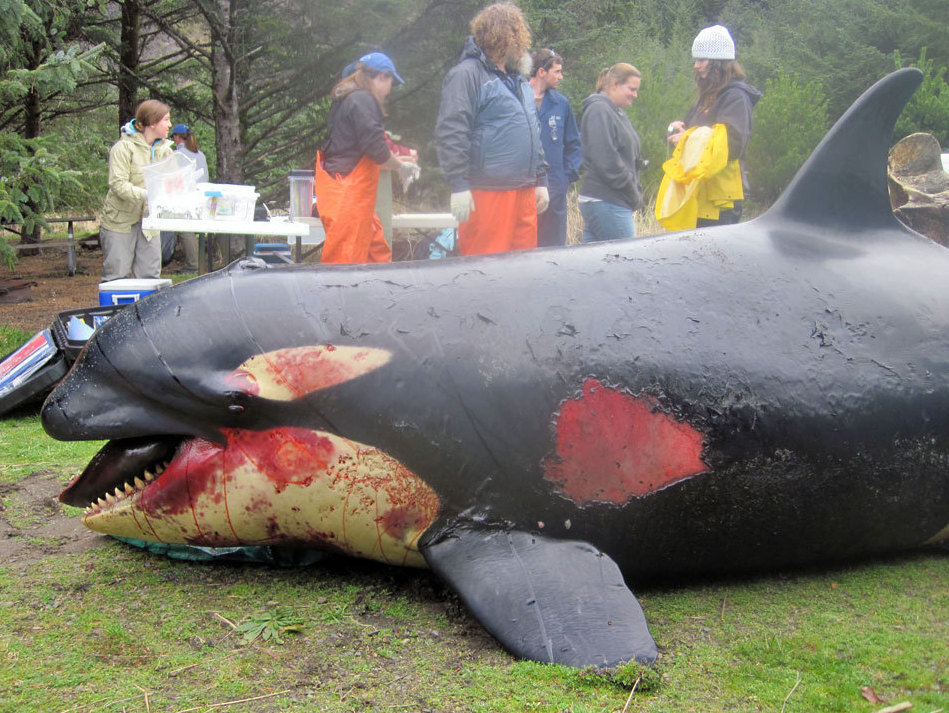 Victoria's body had suffered blunt trauma and bruising. An investigative team says the whale was healthy when she died.

Balcomb had been following Victoria since she was about 3 weeks old. He observed her regularly in Puget Sound, and even gave the whale her name.

"Last summer she put on a beautiful display of breaching and jumping and carrying on," Balcomb says. "And the next I heard of her, she was getting a postmortem on Long Beach, Wash. She was extremely bruised. She looked like she'd been in a war of some kind, or just severely beaten."

"It could have been a host of different things that caused that blunt trauma," says Joe Gaydos, part of the team that's conducting an investigation into Victoria's death for the National Oceanic and Atmospheric Administration. "That's really what we're trying to work out right now."

Gaydos, a veterinarian with the University of California, Davis and the SeaDoc Society, says everyone is looking for a scapegoat in Victoria's case.

"People really don't like when you have to come out and say, 'We think this happened, but we don't know why,' when they want an answer."

So far, Gaydos says the team cannot pinpoint a cause of death.

Little To Go On

What the team does know is that the young orca appears to have been dead for up to a week before she washed ashore. That left her tissue samples in poor shape for the investigative team.

The scientists believe Victoria was healthy when she died — meaning that this is not an example of starvation or sickness.

But the death did present a puzzle: Even though she was badly bruised, Victoria had no broken bones, cuts or lacerations.

Balcomb and others in the whale research community have some pretty strong suspicions about what happened to the orca.

"I can't imagine it'll be anything other than consistent with extreme pressure trauma, such as a bomb or perhaps even a sonar at very close range," Balcomb says.

Balcomb and others are pointing the finger at the U.S. Navy, which is currently permitted to drop up to 10 bombs in its practice range each year, and to use sonar for over 100 hours.

The practice range covers an area about the size of California in the waters off the coast of Oregon and Washington.

The Navy denies any responsibility for Victoria's death. At a recent presentation on San Juan Island, Navy representatives spoke to a packed room of whale experts and concerned residents.

John Mosher, the Navy's Northwest environmental program manager for the Pacific Fleet, told the group that "there really is no explanation from Navy training or Navy activities that would explain that particular stranding event."

The cause of death for more than half of the marine mammal strandings in Washington is never determined.

Environmental groups have filed a lawsuit saying U.S. naval sonar and explosive exercises can harm marine mammals and should be limited.

The details of Navy actions are classified, but there are underwater recordings from the time when Victoria died that could provide more information. Those recordings will be released in August.

This story is part of the public media collaboration EarthFix.