Accessibility links
Are U.S. Troops In Australia A Hedge Against China? The U.S. has sent Marines to Australia as part of a military pivot that will place greater emphasis on Southeast Asia and the Pacific. Some Australians are wondering how this might affect their relations with China. 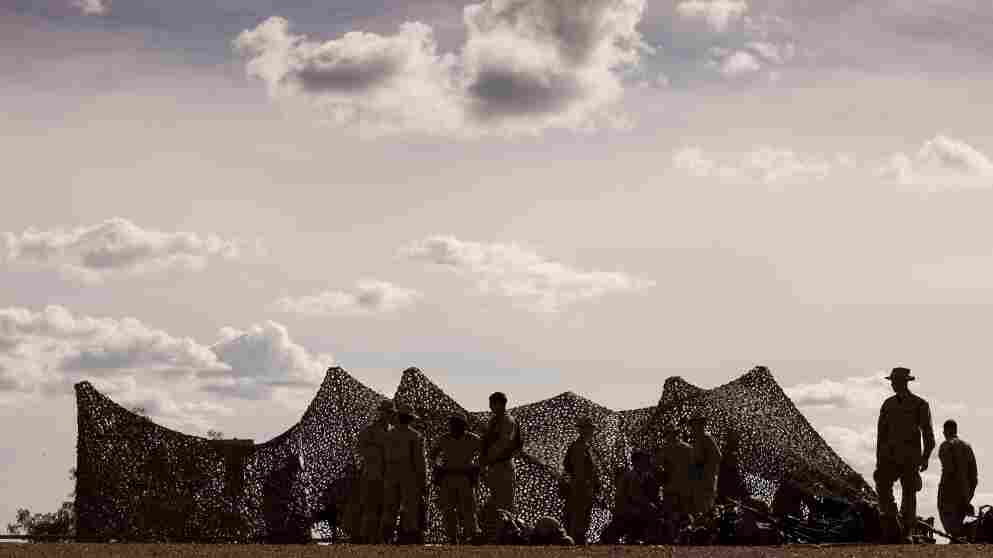 U.S. Marines are shown during a training exercise south of Darwin, Australia. Marines recently arrived in Australia as part of a move by the U.S. to place greater emphasis on Asia and the Pacific. Glenn Campbell/The Sydney Morning Herald/Fairfax Media via Getty Images hide caption 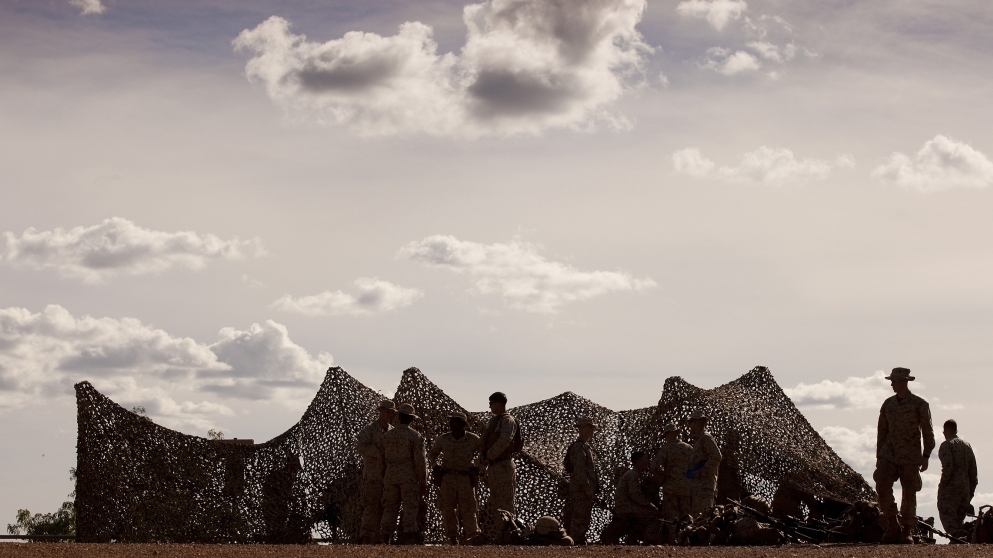 U.S. Marines are shown during a training exercise south of Darwin, Australia. Marines recently arrived in Australia as part of a move by the U.S. to place greater emphasis on Asia and the Pacific.

Since a small contingent of Marines landed in the northern port town of Darwin last month, the U.S. has shown greater interest in using Australian military facilities as part of a larger effort to refocus its military capabilities in Southeast Asia and the western Pacific.

"We have no better ally or friend in the world than Australia, and we have no area in the world which is as important or dynamic over the next 50 years as the Asia Pacific," says Jeffrey Bleich, the U.S. ambassador to Australia.

Bleich and other U.S. officials are quick to emphasize that increased cooperation with Australia is not aimed at a particular threat or adversary.

"Certainly we will stand with Australia," Bleich says. "But we're not looking at any sort of imminent conflict. The whole point of working closely together and training together is to accomplish what we've accomplished over the last 70 years, which is maintaining a peaceful region."

But Australia's latest force posture review, dated March 30, makes it clear that the main factor currently shaping Australia's military strategy is "the rise of China, India and other powers and the continuing strategic engagement of the United States in the Asia-Pacific."

The review also suggests that Australia upgrade airfields on the Cocos Islands in the Indian Ocean, so that Global Hawk surveillance drones can be launched from airstrips there. Canberra and Washington have reportedly discussed basing drones in the Cocos.

We have no better ally or friend in the world than Australia, and we have no area in the world which is as important or dynamic over the next 50 years as the Asia Pacific.

The islands are "a beautiful place from which to mount aerial surveillance of the sea lanes and the straits of Indonesia and Malacca and the Eastern Indian Ocean," says Paul Dibb, emeritus professor at the Australian National University in Canberra. "But there's about $100 million [of] work that needs to be done to strengthen and extend the runway. Ask me if I think it will happen. Yes."

Dibb argues that more U.S.-Australian military cooperation is necessary because of a "lack of confidence-building measures and transparency" as China's military becomes more active in the region.

The U.S. and Australian governments have also downplayed the deployment of U.S. Marines to Darwin last month. Australian Maj. Gen. Michael Krause is in charge of implementing cooperation with U.S. forces. He points out that unlike Japan or South Korea, Australia has not one U.S. military base on its soil.

"There will be no permanent U.S. bases here — unilateral, that are not under Australian control," he asserts. "What we have in Darwin is an Australian base which has Marines on it."

The U.S. recently agreed with Japan to relocate Marines from Okinawa to Darwin, where, Krause says, they will have much more room to train.

"There are increasing pressures on the U.S. in Okinawa and in Guam on training ranges," he says. "We have a training range in northern Australia the size of Belgium. We're happy to share."

He also insists that Australia intends to maintain good relations with both its biggest trading partner, China, and its main military ally, the US. 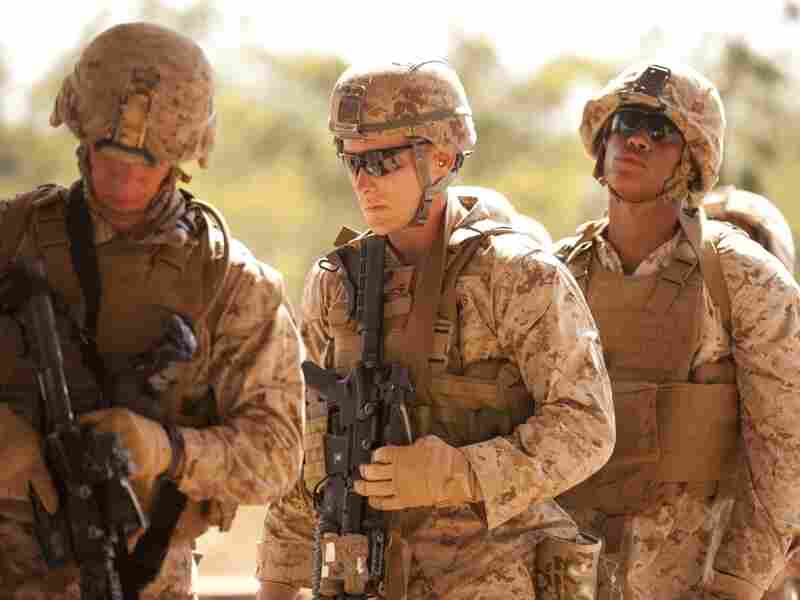 Some Australians wonder whether the presence of U.S. troops in their country could complicate their relations with China. Glenn Campbell/The Sydney Morning/Fairfax Media via Getty Images hide caption 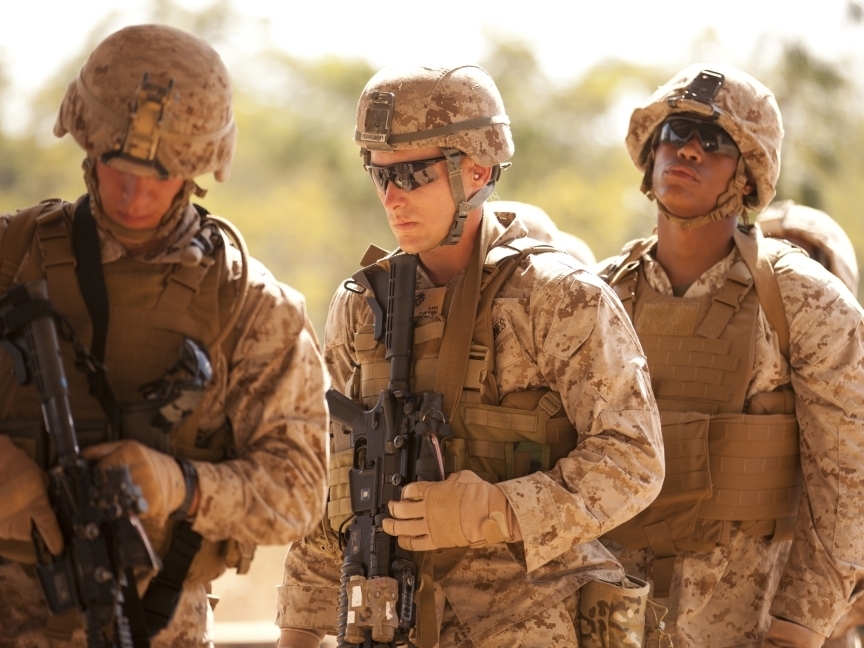 Some Australians wonder whether the presence of U.S. troops in their country could complicate their relations with China.

"From our point of view, one of the underlying assumptions is that you can have more than one friend," he says. "And they can be quite different friends, so you don't have to choose. And we aren't choosing."

Most governments in Asia and the Pacific say that they don't have to choose between the U.S. and China.

But, argues Hugh White, a professor of strategic studies at the Australian National University, "when they say that, what they mean is, 'We don't want to choose.' We in Australia don't get to choose whether we choose. If either the United States or China says we have to choose, then we have to choose."

White argues that by seeking to ramp up military cooperation, the U.S. is trying to make Australia choose –- to support the U.S. efforts to maintain military primacy in the western Pacific and strategic hedging against China. That may not be a wise choice for Australia, White says, but it may prove hard to resist.

"The domination of the western Pacific by a globally paramount Anglo-Saxon power has always been regarded by us as the necessary and sufficient condition for our security," he says. "So for us to go to the United States and say: 'Please now, don't dominate Asia, but share power.' That's a very hard thing for Australians to say."

In a speech to Australia's Parliament last November, President Obama pledged to "preserve our unique ability to project power."

White and other experts say that China's growing military might is already beginning to limit U.S. ability to project power into waters near the Chinese mainland. White believes that eventually, the two sides will have to adopt a posture of mutual deterrence and admit that neither side can dominate the region.

Another critic is former Prime Minister Malcolm Fraser. He argues that U.S. and Australian claims that their actions aren't aimed at China don't match with the facts. He calls on Canberra to engage in more robust and independent diplomacy.

"Instead of giving the appearance of unquestioning support for any American military venture," Fraser says, "we should be advising the United States, you know, you don't need more military forces. Back off. We've got to find a different way to solve these problems."

Fraser concedes that his views have come a long way since 1966, when as minister for the Army, he presided over the conscription of soldiers to fight in Vietnam.

But Fraser points to another chapter in Australia's history as a lesson: Japan's conquest of British colonial outposts, including Singapore and Malaya in World War II. With their far-flung empire crumbling, the British were in no position to provide the security on which Australians had come to rely.