Accessibility links
Movie Review - 'Polisse' - In Paris, A Thin Bleu Line Based on actual cases, the documentary-style drama follows officers of Paris' Child Protection Unit through successes and failures and the ambiguity in between. Critic Mark Jenkins says the film features a virtuoso ensemble cast and is both humane and disturbing. (Recommended) 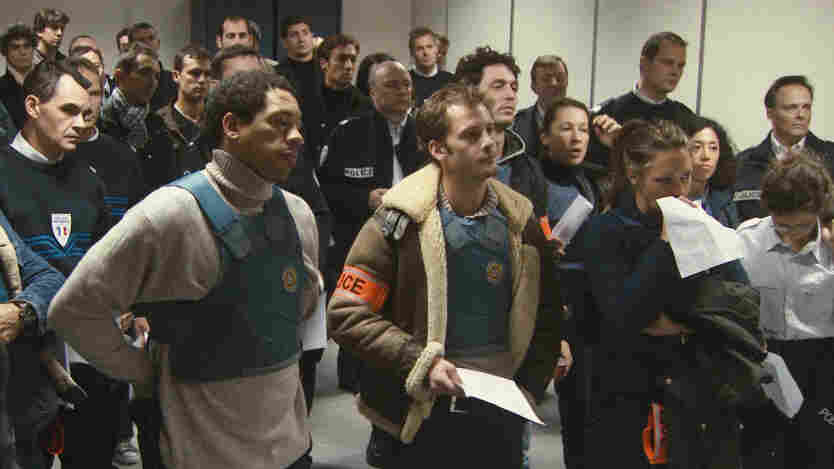 As humane as it is disturbing, Polisse rifles the files of Paris' Child Protection Unit in search of successes, failures and all the shades of ambiguity in between. If the movie's jumpy edits and raw emotions jangle the nerves, that's intentional: This documentary-mimicking drama is designed to evoke the experience of working a beat that can never become routine.

The film, which won the second-place Prix du Jury at Cannes last year, opens with the questioning of a little girl who says her father "scratches my bottom" while she's asleep. Has a crime been committed? Hard to say, but many other cases are less hazy: rape, sexual abuse, child endangerment, underage prostitution and even a boy who's put up for sale. Sometimes the infamy is the bureaucracy itself, which can't be roused to protect the vulnerable.

Director, co-writer and co-star Maiwenn — she doesn't use a surname professionally, but she's the sister of actress-director Isild Le Besco — has grounded every aspect of the film in reality. She took the title from her young son's misspelling of "police" and the crimes from actual cases. That's worth keeping in mind, since several of the incidents seem incredible. Even the officers, shockingly but believably, are occasionally reduced to helpless laughter by the absurdity of the stories they're told.

Simple solutions often elude these cops, who work the multiethnic, relatively downscale neighborhoods of northeast Paris. The script switches quickly and often among storylines and also follows the characters after-hours to show how the pressures of work affect and even define them. Most of the officers, including central players Nadine (My Piece of the Pie star Karin Viard) and Fred (Joey Starr), have chaotic personal lives. They fight to keep families together, yet often live apart from their own spouses and children. 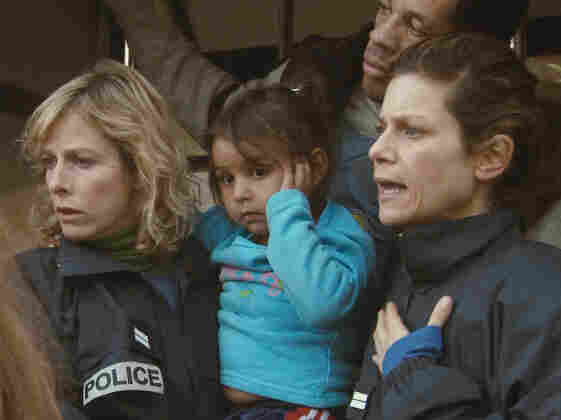 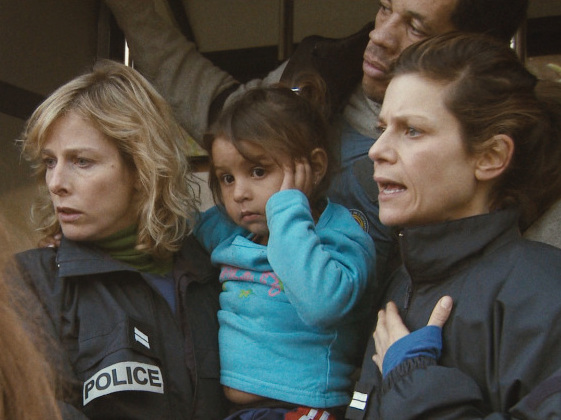 The CPU crew, played by a virtuoso ensemble cast that includes co-writer Emmanuelle Bercot, is a tight group. The cops socialize together, especially after the successful conclusion of a case. Because of the nature of the work, which requires female investigators to interview female victims, there's a near equal division between men and women.

A few subplots illustrate how the officers develop work relationships that are more intense than others. Fred initially resents Melissa, a photographer assigned to document the unit (and played by the director). But the two become lovers, generally leaving the care of their respective children to their exes (or almost-exes). And when Nadine and partner Iris (a pungently bitter Marina Fois) fall out, their professional split is as cataclysmic as any lovers' breakup.

Most of the cops grew up in the districts they now patrol and see themselves in the victims they interview and strive to protect. Fred zealously fights with an aloof superior to find shelter for a young boy and his mother, even as the woman (correctly) predicts that the bureaucracy will separate them. A female Muslim officer (Naidra Ayadi) brandishes a copy of the Quran as she lambastes a co-religionist for treating his daughter as personal property — an approach to child-rearing that's illegal, officially at least, in France.

Polisse has been compared, not unreasonably, to cop series on American TV. The movie even has its Ice-T equivalent in Starr, a rapper turned actor. But Maiwenn's film is less tidy than most U.S. police procedurals, and also — despite the sort of crimes it considers — less lurid. The world the director depicts may be perversely fascinating, but she offers it more in the spirit of enlightenment than entertainment. (Recommended)