Accessibility links
Movie Review - 'Battleship' Inspired by the popular board game, the summer blockbuster pits the U.S. Navy against an invading force of hostile aliens. NPR's Bob Mondello says the Transformers-like mayhem that ensues is more or less incoherent. 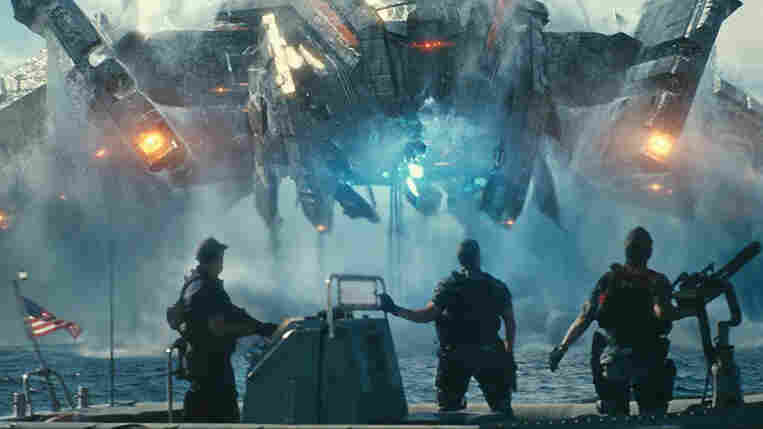 Beast (John Tui), Hopper (Taylor Kitsch) and Raikes (Rihanna) are stunned by the appearance of invading alien forces in the motion picture adaption of the, yes, board game Battleship. ILM/Universal Pictures hide caption

Rated PG-13 for intense sequences of violence, action and destruction, and for language

Read the comic book? Now catch the movie. OK, I get that. Comic books are practically storyboards. Natural transition.

Seen the TV show? Now catch the movie. Even better. Just make the screen bigger and beef up the storyline.

Played with the toys? Now catch the movie. Well, sure, why not let Hollywood's overgrown kids put digital oomph into playtime fantasies.

Played the board game? Now catch the movie. Ummmm ... I'm thinking here. No characters, no plot, no natural tension. In the classic board game Battleship, what happens is basically just that you blow up batt....

So what else to say about Battleship, the movie. Well, it has aliens, for one thing. We've unwittingly beckoned them from afar, and they've arrived without their communications equipment (it was knocked off-course in a fender bender with a satellite), which has made them cranky. Mayhem ensues, looking mostly like Transformers on boats.

As an action director, Peter Berg's no Michael Bay, but he gave Hancock energy enough to get by and put plenty of character into the original movie version of Friday Night Lights. Give him that.

Also scientist Hamish Linklater (geekily funny), Adm. Liam Neeson (growly and grave) and Petty Officer Rihanna, (who can't really be said to have acting chops, but who can run away from a menacing digital effect every bit as persuasively as her more experienced cast mates). 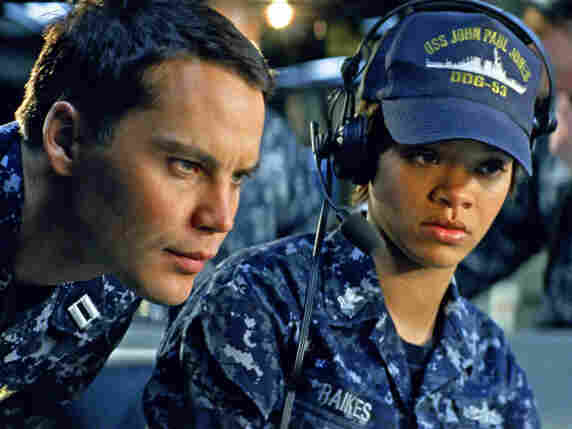 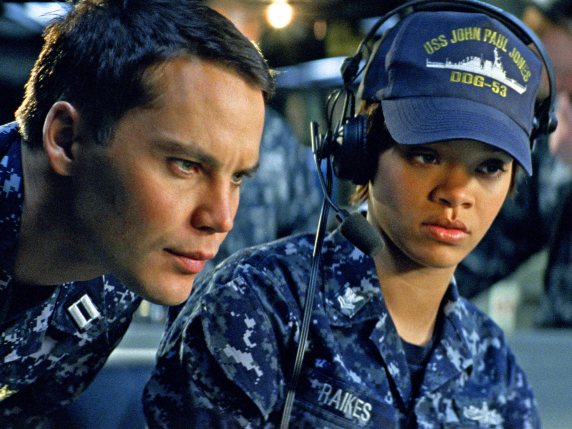 Hopper and Raikes attempt to decipher a strange reading that precedes the alien attack.

The story, by brothers Erich and Jon Hoeber, who also penned the clever, quippy, aging-assassin movie Red, is cleverer and quippier than it has any reason to be, even if it makes not the remotest sense.

The screenwriters have to tie themselves in knots to get to a scene that actually echoes the board game, where both sides must try to blast stationary targets they can't see. And once they have, the outcome is more or less incoherent.

That said, a lot of stuff blows up, about as persuasively as it would in a better movie. An after-the-credits sequence promises a sequel to come, a development that would seem less alarming, frankly, if trade papers weren't reporting that Hasbro's deal-makers have been busy of late.

Ridley Scott has screenwriters working on a movie of Monopoly, and Candyland's been acquired for Adam Sandler. Chutes and Ladders, anyone?