Accessibility links
Not Your Cold War NATO: Alliance To Examine Itself This weekend, thousands will descend on Chicago to attend a NATO summit. The gathering will focus on Afghanistan, but discussions will also include the future of NATO itself, and whether it can overcome its shortfalls. Recent missions show just how far the alliance is from the solidarity of its early days. 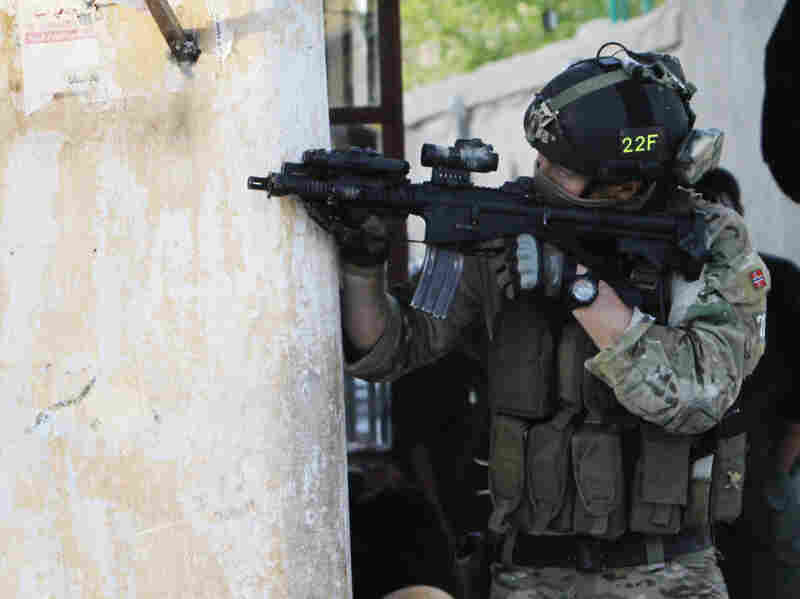 A NATO soldier aims his weapon during a gun battle in Kabul, Afghanistan, in April. NATO is holding a summit in Chicago this weekend, and discussing the future of the alliance is on the agenda. Musadeq Sadeq/AP hide caption 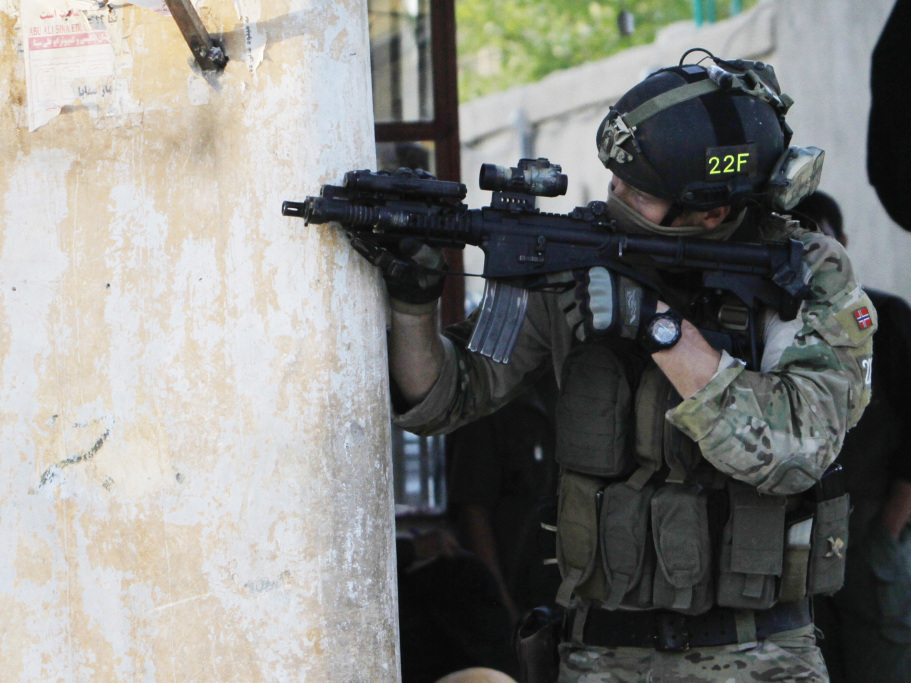 A NATO soldier aims his weapon during a gun battle in Kabul, Afghanistan, in April. NATO is holding a summit in Chicago this weekend, and discussing the future of the alliance is on the agenda.

This weekend, about 60 heads of state and government, and thousands of others will descend on Chicago to attend a NATO summit. The gathering will focus on the alliance's involvement in Afghanistan — and ensuring a long-term commitment to the country.

But the meeting comes at a time of tension within NATO. Discussions will also include the future of NATO itself, and whether it can overcome its shortfalls.

Those shortfalls were clearly illustrated during the military operation in Libya last year. Martin Butcher, an arms control advocate who writes the blog NATO Monitor, says there was little cohesion among the allies. France kicked off the international military intervention on March 19, just two days after the United Nations Security Council passed a resolution authorizing all necessary means to protect Libyan civilians.

About 20 French fighter jets roared across Libya, striking government targets near Benghazi, where the rebellion against Moammar Gadhafi began. France launched the jets with little notice to its NATO allies, Butcher says.

"Certainly it was seen as France was very eager to get into the fight and didn't really coordinate with NATO or with allies," he says. "It was seen very much as [former President Nicolas Sarkozy] trying to get political advantage out of the situation to make France look good."

Barno says the U.S. ultimately had to contribute "sizable amounts" of munitions, precision-guided weapons that the alliance had run out of very quickly.

Barno says the Libya operation illustrates what many perceive as NATO's primary shortcoming: that one member nation — the U.S. — is shouldering most of the financial and military burden.

One of the most public criticisms came from Robert Gates. In one of his final speeches as U.S. Defense Secretary last year, he sharply rebuked the alliance. He complained about Europe's lack of political will and its dwindling defense budgets. Gates said the U.S. Congress was getting tired of footing the bill, and warned of a "dim, if not dismal, future" for the trans-Atlantic alliance.

This was a far cry from the solidarity of NATO's early days, when the Soviet Union represented a real threat. Arms control advocate Butcher says when faced with a common enemy during the Cold War, the NATO alliance was cohesive in its purpose.

Take Afghanistan: Many European members of NATO would not allow their soldiers to fight. Instead, they did development work in the more peaceful areas of the country. Barno, who at one time was a U.S. commander in Afghanistan, says this left a real impression on young American officers who could someday be steering the U.S. military.

"Military officers now, they're in their 20s and 30s. They didn't work with German military units facing off against the Soviets," he says, "and their experience in NATO is what they've seen in Afghanistan over the last seven or eight or nine years. And it's generally not been positive."

In Search Of Efficiency — And Shared Burden

Barno says the almost decade-long involvement in Afghanistan has led to a collective fatigue among European allies. It has also produced questions of whether NATO should be involved in a conflict that is not in Europe's backyard.

Mark Jacobson, senior fellow at the German Marshall Fund, says that thinking is misguided. He says the reality is that, today, no area of the world is out of bounds.

"If you think that the threats from outside the traditional European boundaries of the alliance won't impact what's happening in Europe and North America, then those folks haven't been paying attention to the world over the last 20 years," Jacobson says.

There is an effort to reshape the alliance, such as enhancing partnerships with non-NATO states and developing better military capabilities by better pooling resources and the like, says Jim Townsend, the deputy assistant secretary of defense for European and NATO policy.

"Even during this era of austerity, where so many of our allies are caught up in the financial squeeze of the eurozone crisis ... we're all trying to come up with ways in which we can ensure our defense in the most efficient way possible and in a way that doesn't depend on just the United States," he says.

Townsend says this will be one of the key themes when NATO members descend on Chicago this weekend.