Accessibility links
A Haitian Boy Rescued At Sea, Now A U.S. Coast Guard Grad At age 6, Orlando Morel was adrift with other Haitian refugees in the waters off the Florida coast. The U.S. Coast Guard picked them up, he was adopted by an American, and now, at 24, he's a Coast Guard Academy graduate, headed back to those waters for duty. 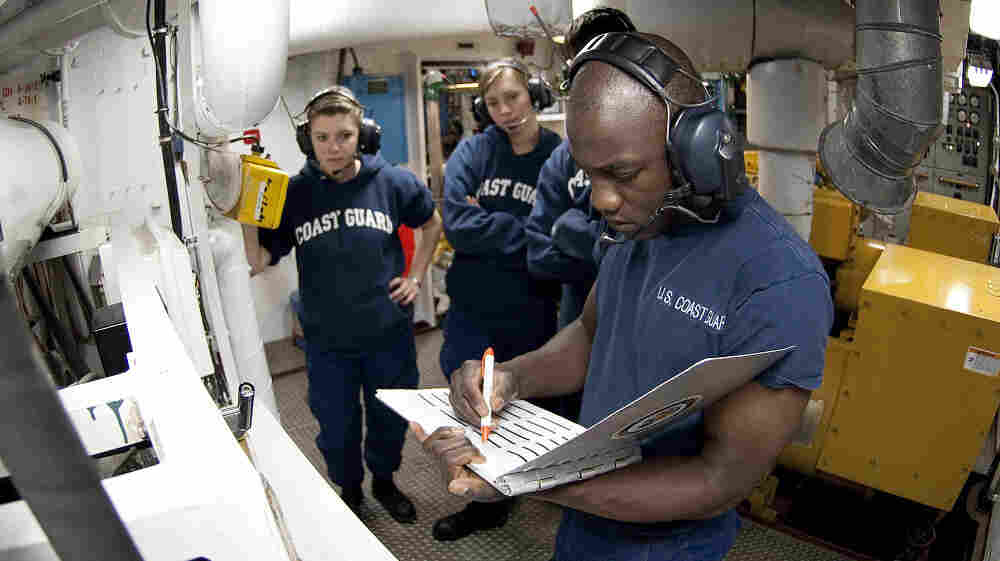 U.S. Coast Guard Academy Cadet Orlando Morel reviews a logbook in the generator room aboard the Coast Guard Cutter Eagle on June 23. Morel was 6 years old when he and his mother were rescued by the Coast Guard while leaving Haiti. Morel graduated Wednesday from the academy in New London, Conn. NyxoLyno Cangemi/AP hide caption 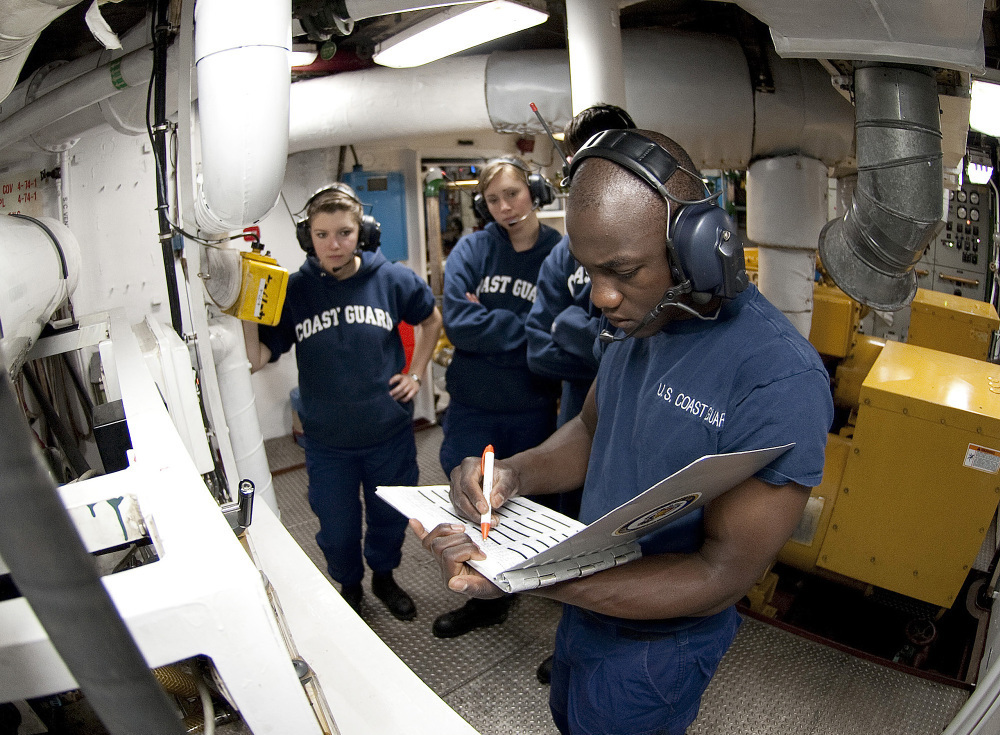 U.S. Coast Guard Academy Cadet Orlando Morel reviews a logbook in the generator room aboard the Coast Guard Cutter Eagle on June 23. Morel was 6 years old when he and his mother were rescued by the Coast Guard while leaving Haiti. Morel graduated Wednesday from the academy in New London, Conn.

Orlando Morel was rescued by the U.S. Coast Guard in the waters off the Florida coast when he was a 6-year-old Haitian refugee. Now 24, he's headed back to Haiti for a tour of duty after graduating from the Coast Guard Academy in New London, Conn.

At the graduation ceremony Wednesday, Morel stepped smartly across the stage in his crisp dress white uniform as the dean read his name. Waiting at the other end of the stage with his commission as ensign was his adoptive mother, retired U.S. Navy Petty Officer 1st Class Louise Jackson.

They specialize in saving people's lives. ... I just love that.

Ensign Orlando Morel, on why he joined the U.S. Coast Guard

Jackson was an animal lab technician at Bethesda Navy Hospital when she was tapped to help translate for ill Haitian refugees who had been brought there. She had emigrated from Haiti about 10 years before. One of the refugees was a woman very sick with cancer, separated from her young son, Orlando, who was at the military base at Guantanamo, Cuba. Jackson helped reunite mother and son.

"He came about a week before his 7th birthday. He came in April, and the mother died in July," Jackson says.

She says Morel's mother asked her to take care of him before she died. Jackson eventually got Morel's father, who had stayed behind in Haiti, to agree to let her adopt Morel and help him become a citizen.

'Any Opportunity You Get To Eat, You Take It'

Morel remembers little of that boat trip as a youngster, before his life as an American. Mostly he remembers that it was crowded, and he was constantly hungry and thirsty.

"A piece of bread fell into the water, and then I just hurried up and grabbed it — because, being overcrowded, any opportunity you get to eat, you take it," Morel says. "And I remember this bread being really, really soggy and really, really salty, but I was really happy that I was able to eat something."

Morel says for a while in his teens, he became rambunctious and "lost," as he calls it — yelling at his mom, staying out late. He credits Jackson with reeling him back in. In his sophomore year of high school, he says, she reminded him that it was the Coast Guard that had saved his life years ago, and she encouraged him to check it out. He did, and he fell in love with it.

"They specialize in saving people's lives — even if they're doing a drug interdiction, if someone falls in the water, they stop everything that they're doing, and it turns into a search and rescue mission. I just love that," he says.

Once Morel got to the academy, his peers, professors and military supervisors all say, they noticed his charisma and his ability to engage almost anyone. Still, many of them never knew his dramatic story.

"My mom, again, she taught me what it means to be humble," he says. "And she told me, 'When you go to the academy, don't tell your story like it's a big deal.' Because, one, it's not me that decided to make the journey — it's people like my biological mom that decided to partake on this journey. And it's people like my mom Louise Jackson, who dedicated her life of self-sacrifice. And me coming to the academy is because of their doing, not my doing."

Jackson says seeing her adopted son achieve an education and independence made her feel like flying.