Accessibility links
Same-Sex Parents Lobby Congress For Equal Rights Dozens of same-sex families descended on Capitol Hill on Thursday to ask Congress for a break. They shared their stories of not being recognized as legal parents — or legal families — in hopes that lawmakers would feel their own views on same-sex rights evolve, just like Obama's did. 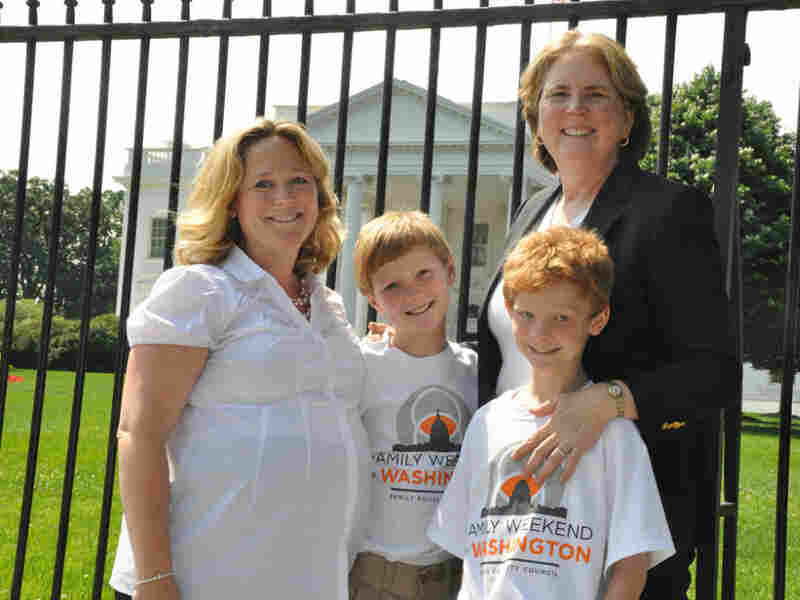 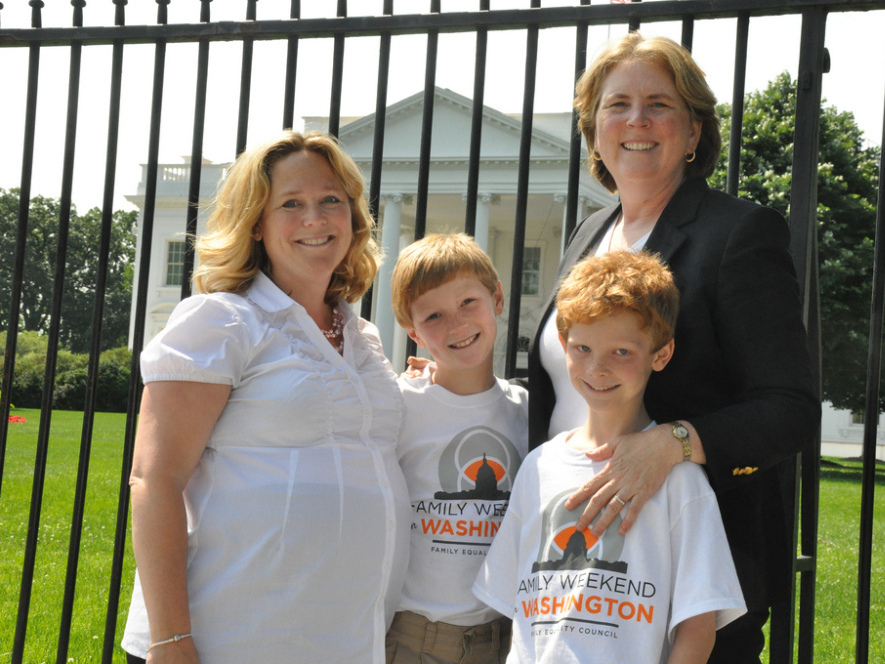 On the edge of the National Mall on Thursday, dozens of moms, dads and kids pose for a group photo framed by the U.S. Capitol. They're just some of the approximately 700,000 same-sex families across the country, despite laws in some states that make raising children difficult for gay couples. Now, they've come to Washington to ask lawmakers to make their lives a little easier.

"Today in the United States, there's kind of a patchwork of state laws," says Jennifer Chrisler, herself a same-sex parent and executive director of the Family Equality Council, which organized the lobbying day. Chrisler says public policy toward same-sex families is out of sync with reality.

"The 12 states where [same-sex] couples are most likely to be raising kids are states like Mississippi and Montana and Kentucky and Louisiana," she says. "And those are the states that actually have some of the worst policy."

In fact, the highest share of same-sex couples is in Mississippi, which bans gay adoption altogether.

The event was planned long before President Obama came out last week in support of same-sex marriage, an announcement that thrust the issue to the forefront of the presidential campaigns. In explaining his decision, Obama invoked staff members and friends who are in same-sex relationships and raising children.

In media interviews since then, presumptive GOP presidential nominee Mitt Romney has said children ideally need a mother and a father. In fact, he has said he'd push for a constitutional amendment to define marriage as between a man and a woman. Still, Romney told Fox News, same-sex adoption is "fine."

"In my state, individuals of the same sex are able to adopt children," he said. "In my view, that's something which people have the right to do."

Later, though, Romney said he was merely acknowledging that same-sex adoptions are allowed in many states. It was the latest in a series of seemingly contradictory statements, over many years, that have left supporters and opponents alike wondering just where Romney stands on gay and lesbian rights.

"When you try to be everything to everybody, you wind up being nothing to nobody," says Bryan Fischer, director of issue analysis for the American Family Association, a conservative Christian group. Fischer has suggested that homosexuality is abnormal and immoral, and says Romney's muddled statements on gay adoption are "terrible."

According to Fischer, "It will certainly help evangelical voters develop a little bit of enthusiasm for Gov. Romney if he will come out firmly on the side of adoptive children needing to be placed in two-parent, opposite-sex households."

But an internal GOP memo leaked last week offers the opposite advice. In it, a Republican pollster warns that support for gays and lesbians is shifting fast — even most Republicans, he writes, support legal protection for same-sex couples.

'Most Of The Problems That We Encounter Are Fear'

In principle, Obama has endorsed bills that would make it easier for same-sex couples to marry, to foster children and to adopt them. But Chrisler says Romney's position of accepting adoption, but opposing marriage, leaves families vulnerable. Ann Feeley-Leetz is part of one such family. 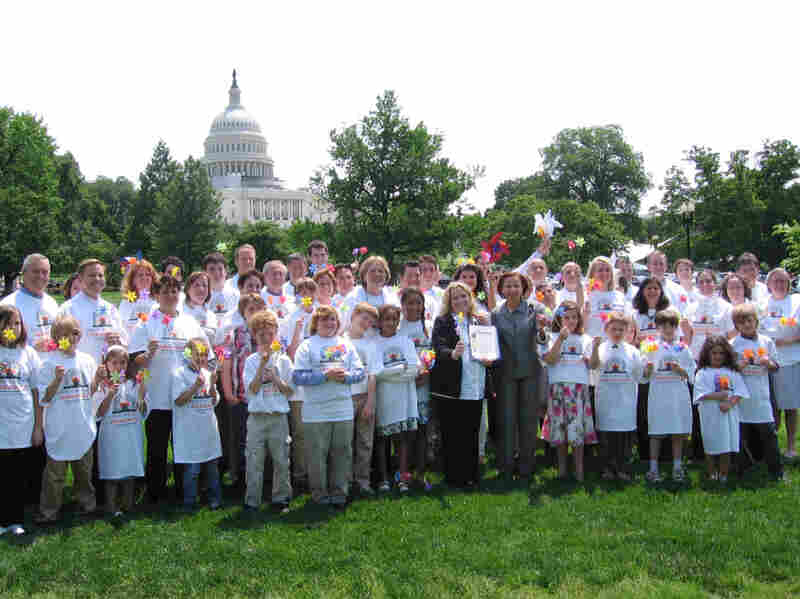 Same-sex families are in Washington to talk with legislators about adoption and foster care, and the repeal of the Defense of Marriage Act, among other issues. Jennifer Ludden/NPR hide caption 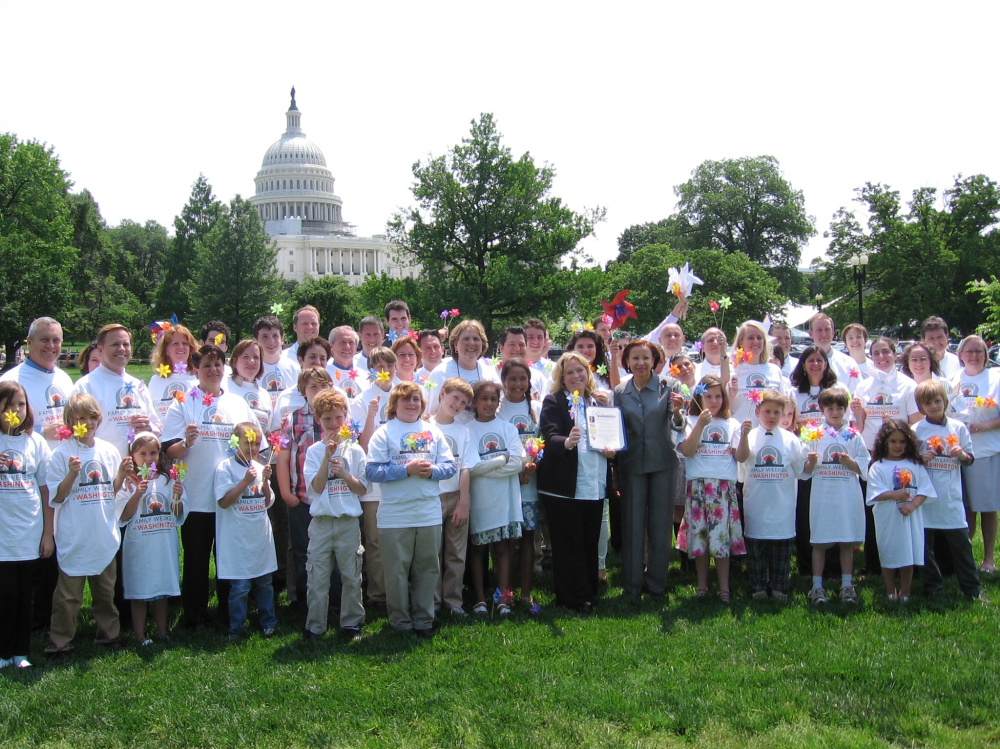 Same-sex families are in Washington to talk with legislators about adoption and foster care, and the repeal of the Defense of Marriage Act, among other issues.

"Most of the problems that we encounter are fear," says Feeley-Leetz, who came to the Capitol Hill event with her partner, Lori Feeley-Leetz, and their 8- and 9-year old children, Katie and Sam. The kids are biologically Ann's, and Lori has helped raise them from birth, but the state of Virginia, where they live, does not recognize Lori as their parent.

"If we were traveling and something happened to Ann, unfortunately I have no legal rights," Lori says. "They could put the kids on a plane and send them [away], and I would have absolutely no say about it. It scares me."

Bryan Carr and his partner have also come to lobby Congress. They live in Texas with their 10-year-old twins. Carr, an accountant, says that from a business perspective, same-sex families get a raw deal.

"Even though we're both legal parents, we cannot get a family insurance policy," he says. "So we actually have to get separate insurance policies, which cost way more."

Carr says they also pay tens of thousands of dollars more in income taxes because they can't file jointly.

The list of bills he and the others have come out to support has little chance of passage in this Congress. But in making the rounds on Capitol Hill, children in tow, they hope some lawmakers will feel their own views on same-sex rights evolving, just like Obama's did.