Accessibility links
Coming Soon — To A Theater Nowhere Near You Feel like you're the last to see the new Hollywood blockbuster? You may be right — because studios have started premiering big films overseas before they come to the United States. 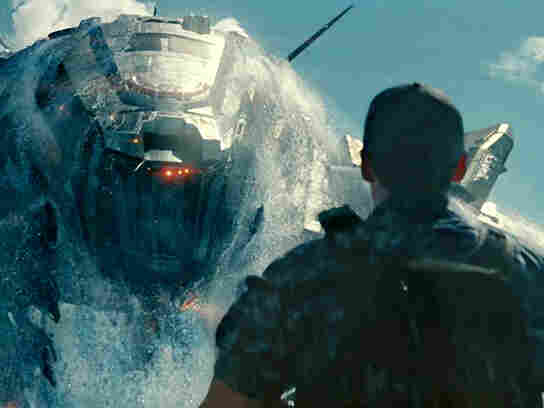 A scene from Battleship, which opens this weekend in the U.S. Thanks to earlier releases abroad, the film has already grossed $215 million worldwide. ILM/Universal Pictures hide caption 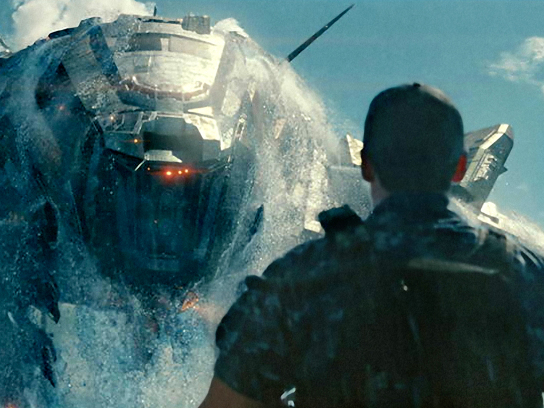 A scene from Battleship, which opens this weekend in the U.S. Thanks to earlier releases abroad, the film has already grossed $215 million worldwide.

The movie Battleship, based on the popular board game, opens today in the U.S. In most respects, it's a typical popcorn picture — the kind of effects-laden action movie that audiences often turn into a summer blockbuster.

And while it may not be any good, it is undeniably ours — American from the water up: a Universal Studios picture about an alien invasion, crammed with special effects from Industrial Light and Magic and set largely on American warships.

But there is one respect in which this homegrown sci-fi epic is something of an outlier: American audiences are among the last to see it.

Hollywood studios have started premiering big films overseas before they come to the United States, and Battleship is a prime example of this practice: It first hoisted anchor six weeks ago in Japan, then cruised into Europe a week later. Soon after, it steamed into Russia and Pakistan, and has since docked in every movie port of call on the planet except the U.S., Canada and Paraguay.

Watching 'The Avengers' In India, With A Twist

That release plan would have been unimaginable a decade ago. Then, it was a given that a "Hollywood" film would first open on American shores. But while the U.S. box office has remained basically stable for the past decade, the overseas box office has skyrocketed. And with most blockbusters now earning twice as much overseas as they do in this country, it makes sense to take advantage of scheduling quirks elsewhere.

The Avengers, for instance, opened here on May 4 — but it opened a week earlier in 39 other countries, because May 1 is a national holiday in most of the world — International Workers' Day. As a result, the labors of Iron Man, Hulk, Thor and their cohorts had already brought in $188 million by the time they nailed down the biggest opening weekend in American history.

Not every blockbuster will benefit from this sort of thing. Sometimes it's good for a film to open here and get an international buzz going before it heads overseas.

The Hunger Games, for instance, might have benefited internationally had it waited a week or two for the enormous U.S. grosses to raise the film's profile. Here, with the books best-sellers and the pre-opening hype enormous, everybody wanted to see it. But, at least initially, that didn't happen overseas, and it played mostly to its teen fan base. 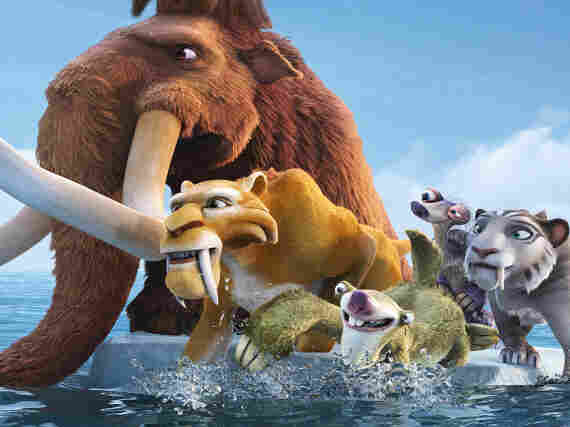 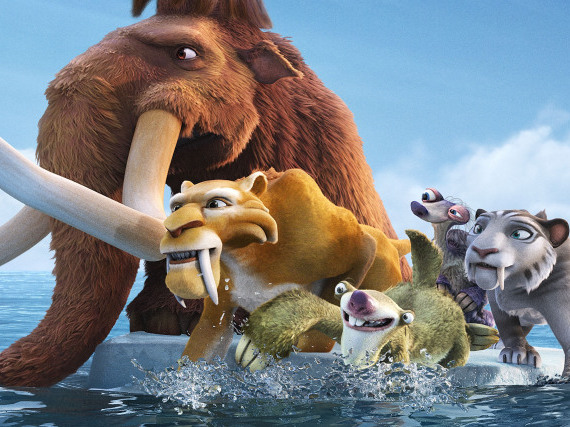 Prehistoric creatures Manny, Diego, Sid and friends return in Ice Age: Continental Drift in theaters July 13 in America, but internationally as soon as June 27 (in France).

As the animated film Rio established last spring around this time, the reverse can also happen. Rio, about a blue macaw who had only ever known life in a cage, opened overseas first and had that weekend's biggest opening worldwide. The American media picked up on the film's success, and a kid flick that had been struggling to make an impression domestically ended up opening a good deal better than Hollywood observers expected.

Kid flicks are especially likely to adjust their schedules overseas, since our school holidays don't match up with those in other countries that don't celebrate, say, Thanksgiving. This summer, Ice Age: Continental Drift will drift to the continents of Europe, Latin America and Australia two weeks before opening here.

And pictures for older audiences, too: The Amazing Spider-Man will amaze Japan and New Zealand five days before it amazes the U.S. And if you positively can't wait to see Ridley Scott's prequel to Alien, Prometheus, you'll want to book a flight to Europe.

Prometheus will open a week early in Europe to get ahead of soccer's Eurocup finals, which the studio figures will be a huge distraction to young males, the film's target audience.

If you're desperate to see the new Bourne movie, on the other hand — the first one without Matt Damon — stay right where you are. The plot of The Bourne Legacy may globe-trot all over, but it will open in the U.S. on Aug. 3 — and won't reach most of the locations where it was shot until almost a month later.