Accessibility links
Pipeline Flip Turns U.S. Oil World 'Upside Down' An oil boom in the American heartland has created an oil glut in the middle of the country. Now, a pipeline that has been pumping crude oil from Texas to the Midwest will reverse its flow, reducing the bottleneck — and potentially creating winners and losers at the pump. 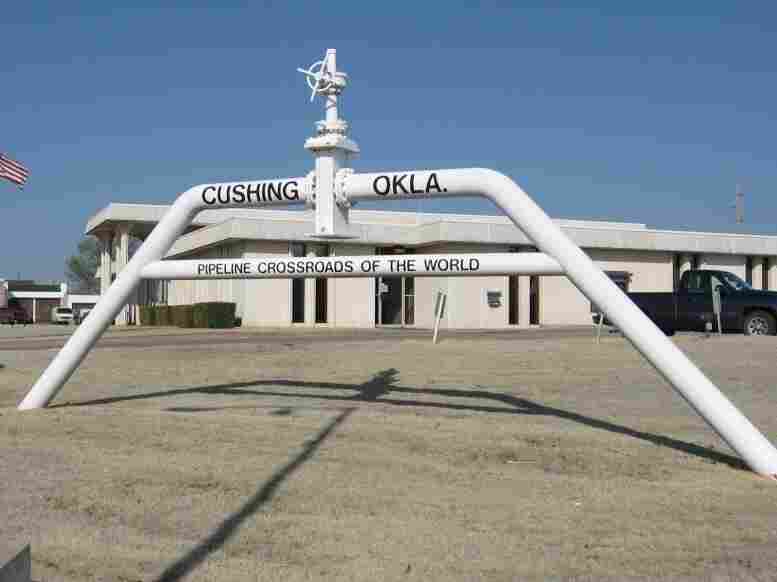 The U.S. oil boom has created a glut of crude in Cushing, Okla., a major oil storage hub. This sign dubs the city the "Pipeline Crossroads of the World." Jeff Brady/NPR hide caption 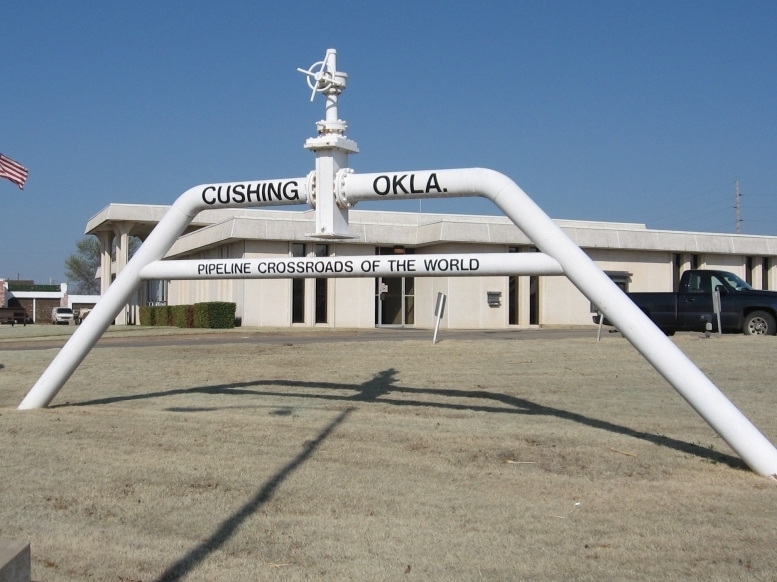 The U.S. oil boom has created a glut of crude in Cushing, Okla., a major oil storage hub. This sign dubs the city the "Pipeline Crossroads of the World."

For years, Cushing, Okla., has been on the receiving end of a 500-mile pipeline funneling oil from the Gulf of Mexico to the American heartland.

Starting this weekend, that pipeline will start moving crude in the other direction. That flow reversal could soon have implications at gas pumps around the country.

"For 40 years, crude oil flowed north," says Philip Verleger, a visiting fellow at the Peterson Institute for International Economics. "Today, oil flows south. It's as if we turned the world upside down."

Until recently, it was assumed the days of oil-drilling booms in the middle of North America were over. But controversial practices, like mining the oil sands of Alberta and hydraulic fracturing, are changing that.

Increasing production in the middle of the country has oil gushing into huge tanks in Cushing, Verleger says. All that surplus means a barrel of oil in Cushing sells for $15 to $20 less than on the coasts — and that means there's a lot of money to be made by transporting that cheaper oil to refineries in Texas.

Other energy companies have other pipelines planned, including TransCanada's controversial Keystone XL pipeline.

A year ago, Verleger says, "there was no capacity to move oil from Cushing down to the Gulf Coast." Now, Verleger expects to see "up to a million barrels a day of capacity" flowing within the next 18 months. 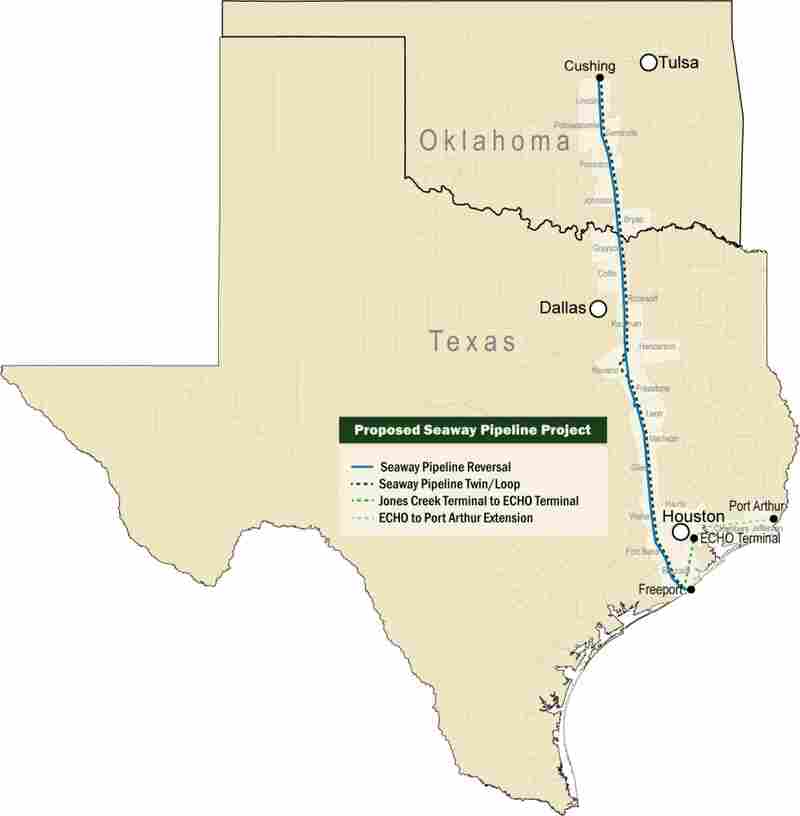 After 17 years of operation, the Seaway Pipeline will reverse flow and send oil from the U.S. heartland to refineries on the Gulf Coast. Seaway Crude Pipeline Company hide caption 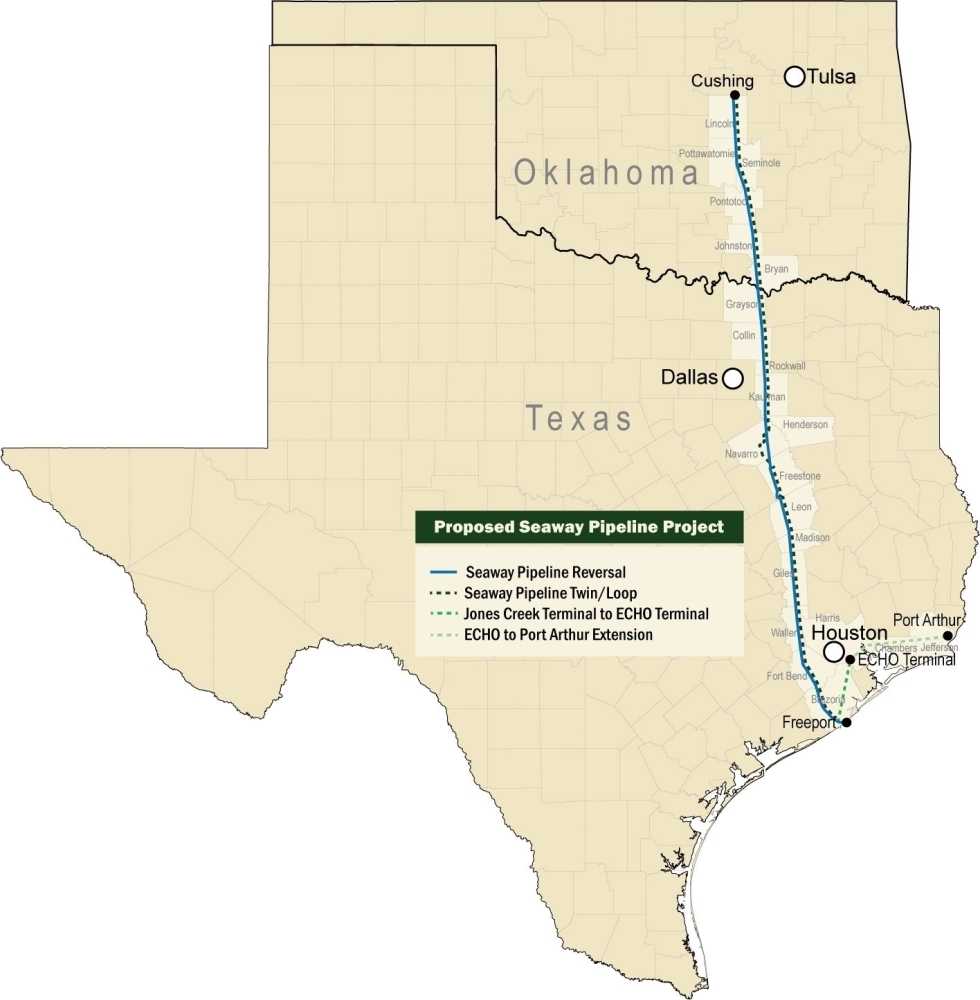 After 17 years of operation, the Seaway Pipeline will reverse flow and send oil from the U.S. heartland to refineries on the Gulf Coast.

Higher prices will help small oil producers in places like Oklahoma, who will earn more money for each barrel they sell.

But big changes in the oil business often lead to losers as well as winners. Tom Kloza, an analyst with the Oil Price Information Service, says the oil reversal out of the middle U.S. will drive gasoline prices higher in some parts of the country.

"Drivers in the Midwest, Upper Midwest and the West — like Colorado and perhaps parts of Texas — may see a slight increase, relative to the rest of the country," Kloza says.

Drivers along the Gulf Coast and in the Southeast will end up on the winner's side, he says. All that cheap oil from Cushing moving to the Gulf will mean lower gasoline prices there.

Kloza predicts that some places with low gas taxes — like South Carolina — could see fuel as cheap as $3 a gallon in the coming months.