Accessibility links
Weekly Standard: Stimulus? What Stimulus? Amidst much talk about the world's economy — JP Morgan's losses, the Greek debt crisis — there's been little discussion of the economic stimulus passed by President Obama's administration. Jeffrey H. Anderson of The Weekly Standard says it's because there's not much to brag about. 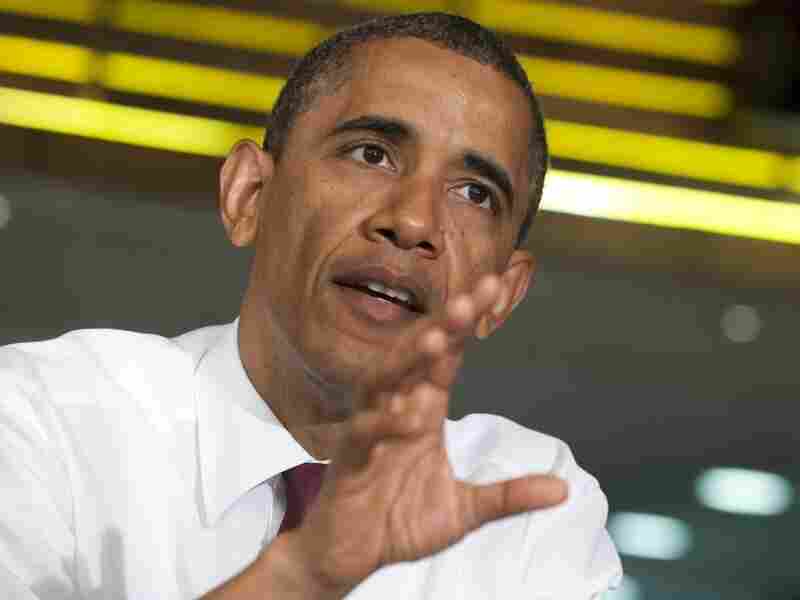 President Barack Obama speaks during a roundtable discussion with small business owners at the Taylor Gourmet restaurant in Washington, D.C., May 16, 2012. Obama urged Congress to invest in small businesses by passing legislation that will increase hiring and entreprenuership. Saul Loeb/AFP/GettyImages hide caption 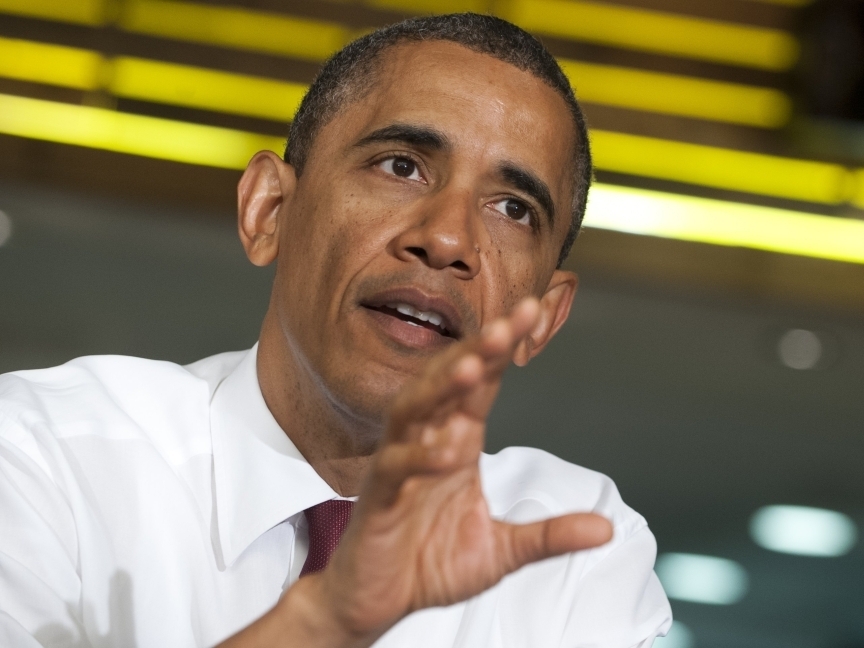 President Barack Obama speaks during a roundtable discussion with small business owners at the Taylor Gourmet restaurant in Washington, D.C., May 16, 2012. Obama urged Congress to invest in small businesses by passing legislation that will increase hiring and entreprenuership.

Read Another Opinion About The President's Economic Worries

On July 24, 2008, candidate Barack Obama toured Europe and drew 200,000 spectators to a rally in Berlin. On May 5, 2012, President Barack Obama officially launched his reelection campaign — which he unofficially launched over a year ago — but couldn't fill a 19,000-seat basketball arena in Columbus, Ohio. While the level of enthusiasm has noticeably declined, the message is remarkably similar. Aside from a few stray sentences, Obama sounded no more like a president running on a four-year record of accomplishments when he spoke in Columbus than he had when he'd spoken in Berlin.

Of course, when your two biggest legislative achievements are a hugely unpopular 2,700-page health care overhaul that most Americans want to see repealed (if the Supreme Court doesn't strike it down first) and a $787,000,000,000 economic "stimulus" that didn't stimulate much of anything besides the national debt (which has risen from $9.8 trillion at this point in 2008 to $15.7 trillion today), perhaps silence is golden.

But it's not only in formal speeches that the Obama administration is steering clear of publicizing the stimulus. It has now been five months since the administration last put out a report card on the so-called American Recovery and Reinvestment Act (ARRA — aka the "stimulus"), which the act itself requires the administration to do. In fact, the administration is now three economic quarters behind schedule in chronicling the effects of Obama's second-most prominent piece of legislation — again, in defiance of the very law it's supposed to be reviewing. (Those who live to impose regulations on others aren't always as eager to obey regulations themselves.)

Why hesitate to release these reports? The answer, as you may have guessed, is that there's not much to brag about.

The ARRA requires that the reports in question be released by the White House's Council of Economic Advisers (CEA), a group of three economists, all handpicked by the president. The council is supposed to have released twelve such reports by now; it has released only eight. But these eight reports tell a revealing tale.

Last July, The Weekly Standard highlighted one of the council's reports. Using what it called "mainstream estimates of economic multipliers for the effects of fiscal stimulus," the council at that time estimated that the stimulus had created or saved just under 2.4 million jobs at a cost of $666 billion — which meant a cost to taxpayers of $278,000 per job. The administration cried foul, responding that the stimulus "was more than a measure to create or save jobs." It was also an "investment" in things "critical to America's long-term success" and therefore couldn't adequately be judged on the basis of its cost per job created (or saved).

But the stimulus was certainly sold to the American people as a means to get the economy moving and hence to create jobs. In early 2009 (when the reported unemployment rate was 7.3 percent), Obama's first head of the CEA, Christina Romer, said the legislation was needed to keep unemployment below 8 percent. She predicted that, by this time in 2012, the stimulus would have caused unemployment to fall below 6 percent. Instead, after the "stimulus" was passed, the unemployment rate hit 10 percent, and it has now stayed above 8 percent for more than three years.

Whether the Obama administration intended for the stimulus to be a job-creating measure or an "investment" in pet projects and constituencies, this much is clear: For every $278,000 in taxpayer-funded stimulus money that the administration spent as of the July report, only one job was added or saved. And that's according to an estimate from Obama's own economists.

And it has gotten worse from there. Last December, Obama's economists published another report, this one covering the period through the second quarter of 2011 (and released five months late). That report showed that the stimulus had by then cost $697 billion and had created or saved some 2.2 million jobs. That works out to a cost to taxpayers of $317,000 per job — again, according to Obama's economists.

Moreover, the December report marked the sixth straight quarterly report showing that the stimulus's cost per job is rising: In reports spanning January 2010 through December 2011, the stimulus's cost per job more than doubled, rising from $146,000 (in January 2010) to $317,000 (in December 2011). With each passing quarter, the stimulus has become an even worse deal for taxpayers. Given this trajectory, is it any wonder the administration doesn't seem eager to fulfill its legal requirement to release reports from the third and fourth quarters of 2011 and the first quarter of 2012?

What's more, whatever minimal success the "stimulus" might have had, it's clearly not sustainable. As of the third quarter of 2010, the "stimulus" had supposedly created or saved 2.7 million jobs. As of the second quarter of 2011 (the last quarter for which the administration has released results), the Obama economists were claiming to have created or saved only 2.2 million jobs. Over that span of nine months, half a million jobs have disappeared while the costs kept rising, as another $130 billion went out the door.

As abysmal as this record is, the real performance of the stimulus is probably even worse. After all, one would hardly consider the White House Council of Economic Advisers to be the most unbiased reviewer of the legislation's effects. Still, when the numbers from Obama's own economists imply that the economy would now be generating job growth at a faster rate if the stimulus had never been passed, that's an eye-opening indictment of one of President Obama's two centerpiece initiatives.

Maybe that's why, instead of highlighting the stimulus (or Obamacare or much of anything else in his tenure as president), Obama told his supporters in the partially filled basketball arena in Columbus, "If people ask you what this campaign is about, you tell them it's still about hope. You tell them it's still about change." It's probably also why he added, "I'm asking you to keep believing in me. I told you in 2008 that I wasn't a perfect man, and I would never be a perfect president." And it's presumably why he said, "The real question... is not just about how we're doing today. It's about how we'll be doing tomorrow." He also declared, "We have to move forward, to the future we imagined in 2008... That's why I'm running for a second term as president of the United States."

That may be why Obama is running again. But that's no reason for us to be foolish enough to elect him again.