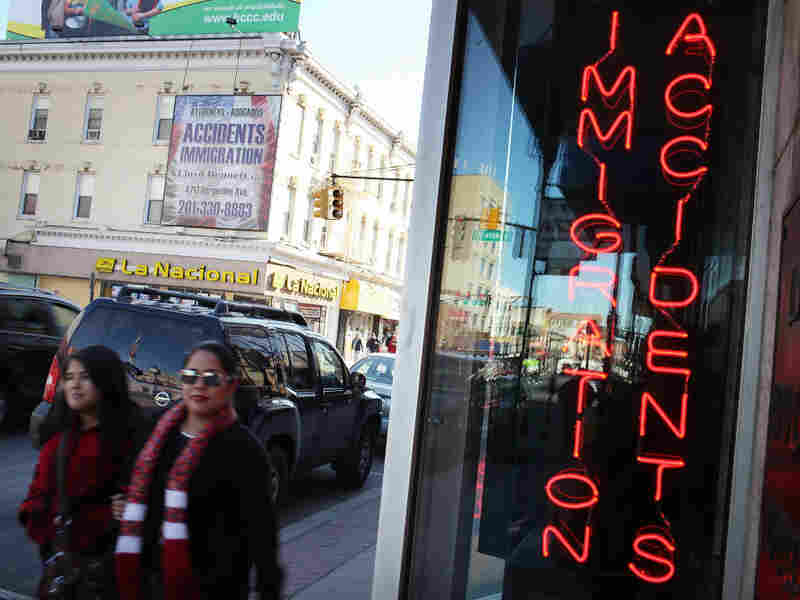 Hispanic residents walk by a law office in Union City, N.J., specializing in immigration in March. Union City is one of the state's largest cities, and has a Hispanic population of more than 80 percent. Spencer Platt/Getty Images hide caption 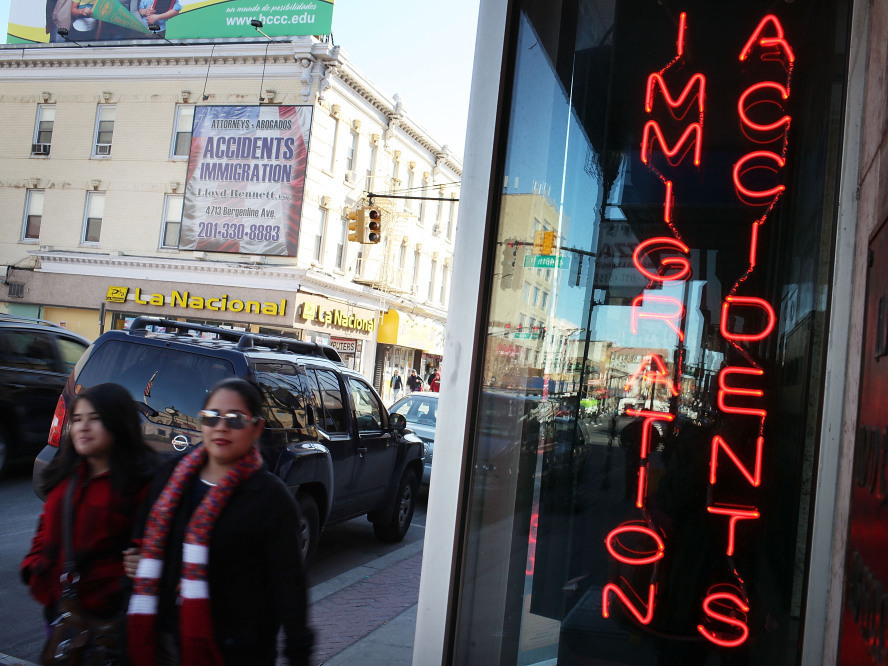 Hispanic residents walk by a law office in Union City, N.J., specializing in immigration in March. Union City is one of the state's largest cities, and has a Hispanic population of more than 80 percent.

The U.S. Supreme Court's expected ruling in June on Arizona's immigration law will set the blueprint for states where many officials say they face a crisis in trying to crack down on rising numbers of illegal residents.

Yet population changes and various research indicate that the great flow primarily of Latino illegal immigrants, which lasted at least two decades, ended several years ago.

A funny thing happened on the way to Latinos becoming America's largest minority: Their population growth significantly slowed, so much so that many demographers estimate the boom peaked between 2005 and 2006.

By 2010, the majority of Latinos living in America were born here. And Mexican immigration, which contributed the overwhelming majority of illegal entries, has come to a halt.

As the migration surge ebbed, the political debate over illegal immigration actually intensified. Several states have drafted or passed legislation modeled after Arizona's, enacted in 2010, causing a political firestorm and a wave of legal challenges. Controversy over the laws has entered the presidential election.

Do these trends mean America no longer needs to corral illegal immigration?

Renowned demographer William H. Frey, of the Brookings Institution, told The Associated Press that "the concerns, especially about low-skilled and undocumented Hispanic immigration, represent issues that could well be behind us."

Others aren't at all convinced.

"I don't know that policy has ever been responsive to data," says Princeton University sociologist Marta Tienda. "It's discouraging to see that good data does not make it into the policy process because sometimes the policy is driven by politics."

I don't know that policy has ever been responsive to data.

Tienda is among those whose research years ago predicted these population changes, including the census report released Thursday showing that nonwhite babies now make up a majority of U.S. births.

Researchers agree that no one factor contributed to the slowed immigration. The recession and high unemployment have discouraged migrants, as has heightened border enforcement, a record number of deportations during the Obama administration and a strengthened Mexican economy.

When the U.S. economy eventually bounces back, illegal immigrants again will be attracted by jobs as "powerful magnets," says Bob Dane, a spokesman at the Federation for American Immigration Reform, which opposes amnesty and favors tougher enforcement of existing laws.

"It proves that illegal immigration is a controllable phenomenon," Dane says. "You control it by drying up the jobs magnet."