Accessibility links
In Change, Palestinians Now Seek High-Profile Visits For decades, the Palestinians have urged foreign Muslims to boycott one of the holiest sites in Islam, the Al-Aqsa mosque in Jerusalem. But now, Palestinian religious figures are encouraging such visits, saying they could highlight Palestinian claims in their feud with Israel. 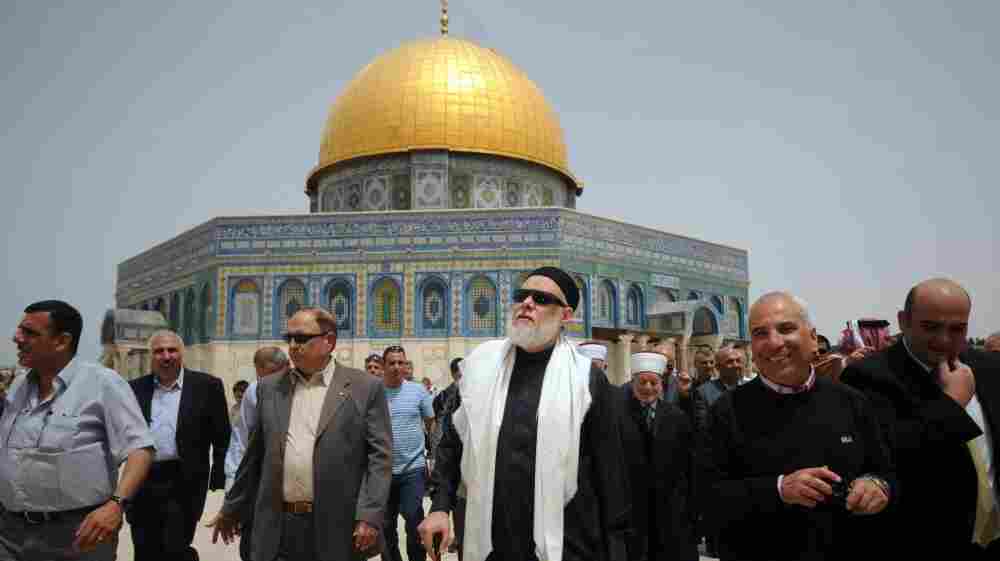 Egypt's grand mufti, Ali Gomaa (center, with scarf), visits the Al-Aqsa mosque in Jerusalem in April. The Dome of the Rock, which is part of the same compound, is shown behind him. Many Muslims have boycotted the site because Israel claims sovereignty. But Palestinian religious figures now say they welcome such visits, a move that has sparked controversy. AFP/Getty Images hide caption 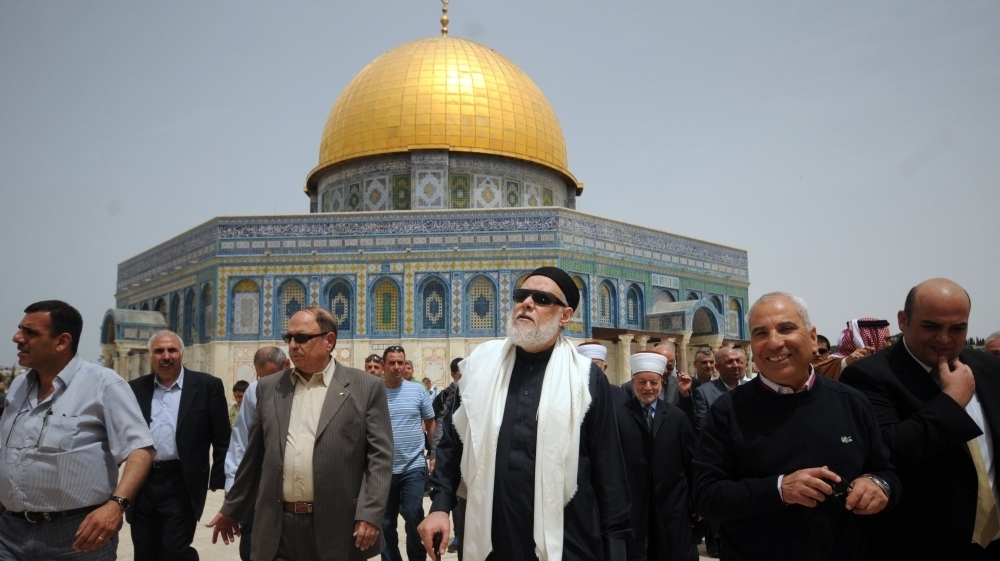 Egypt's grand mufti, Ali Gomaa (center, with scarf), visits the Al-Aqsa mosque in Jerusalem in April. The Dome of the Rock, which is part of the same compound, is shown behind him. Many Muslims have boycotted the site because Israel claims sovereignty. But Palestinian religious figures now say they welcome such visits, a move that has sparked controversy.

For decades, Muslims around the world have been unofficially boycotting Islam's third holiest site, the Al-Aqsa mosque Jerusalem.

Many Muslims believe that visiting legitimizes Israel's claim to the site, which also sits atop the holiest place in Judaism. The Palestinians, meanwhile, are seeking a state with a capital in east Jerusalem, where the mosque is located.

But Palestinian religious authorities at Al-Aqsa and Palestinian officials are now calling on Muslims to visit the shrine, a change that is creating controversy within the Palestinian community.

Last month one of Egypt's most important religious figures, Grand Mufti Ali Gomaa, came and prayed at the mosque.

The visit sparked an outcry, and he came under harsh criticism in many quarters. But in Jerusalem, Palestinian religious figures are pushing for more high-profile visits to the mosque, which is part of the larger compound known by Muslims as the Noble Sanctuary.

"We have a very clear position on this. We welcome and encourage these visits by Islamic leaders. The Noble Sanctuary is under Israeli occupation and such visits lift the siege from this sacred place," says Azzam Tamimi, the administrative head of the Noble Sanctuary.

Muslims run the mosque and the compound on a day-to-day basis, but Israel claims sovereignty. Israeli security forces are always in the vicinity and intervene whenever they choose.

Tamimi believes the visits by Muslims from other countries bolster Palestinian claims to east Jerusalem, and he says the Arab boycott only serves Israel's interests.

"There are economic problems, social problems here. All that is because of the occupation," he says. "Having Muslims come here will help us economically and will see Palestinian hotels and shops flourish."

We have a very clear position on this. We welcome and encourage these visits by Islamic leaders. The Noble Sanctuary is under Israeli occupation and such visits lift the siege from this sacred place.

Azzam Tamimi, administrative head of the Noble Sanctuary in Jerusalem

For centuries, Muslim pilgrims visited Jerusalem on their way to the two holiest sites in Islam — Mecca and Medina, which are in Saudi Arabia. But in the 1967 Arab-Israeli war, Israel captured east Jerusalem from Jordan. Israel subsequently annexed east Jerusalem and says the entire city belongs to Israel, though no other nation recognizes that claim.

The Muslim shrine was built some 1,300 years ago atop the ruins of the ancient Jewish temples, the holiest sites in Judaism. Jews pray daily at the Western Wall, a retaining wall still standing from the days of the temple.

Israel, meanwhile, has had its best year ever for tourism, and most of the visitors have been Christian or Jewish.

Recently there has been an uptick in Muslim visitors, a few thousand tourists mostly from the Far East and India. But that's only a tiny fraction of the overall total.

Israel says it welcomes tourists from all faiths.

Visas Hard To Get

But the Palestinan minister for religious affairs, Mahmoud Habash, says it's extremely difficult to get visas for dignitaries coming from the Arab world.

He says half the members of a recent delegation from Bahrain were denied visas by Israeli authorities. Still, Habash, who is based in the West Bank city of Ramallah, says Muslims should at least try to visit Jerusalem.

"This boycott only serves those who want to see Muslims in Jerusalem isolated and besieged," he says. "It only serves the Israeli occupation. It's a mistake that has to be corrected. Muslims need to reconnect with the Noble Sanctuary."

Not so, says independent Palestinian analyst Hani al-Masri. He says the boycott needs to continue. He says simply dealing with the Israelis on the issue of getting a visa or a permit legitimizes the occupation.

"Israel has control over who comes into the Noble Sanctuary," he says. "Look at the photographs of the dignitaries when they come to the Al-Aqsa mosque. They are accompanied by Israeli security. I think we should first work on getting Palestinians permits to come and pray in Jerusalem rather than foreigners."

He points to the fact that most Palestinians in the West Bank are not even allowed to enter Jerusalem.

In a random sampling of Palestinians just outside the gates of the mosque compound, most agreed with the boycott.

Mital Kufr Ani says she doesn't support Arabs and Muslims coming from abroad to visit the Noble Sanctuary while "we are under occupation." Let them come, she says, "when we are free."