Accessibility links
First Listen: Edward Sharpe And The Magnetic Zeros, 'Here' Here finds singer Alex Ebert and company ruminating on and celebrating the aftermath of salvation. It's another collection of sweet songs that search, seek and ultimately revel in the best of what they find. 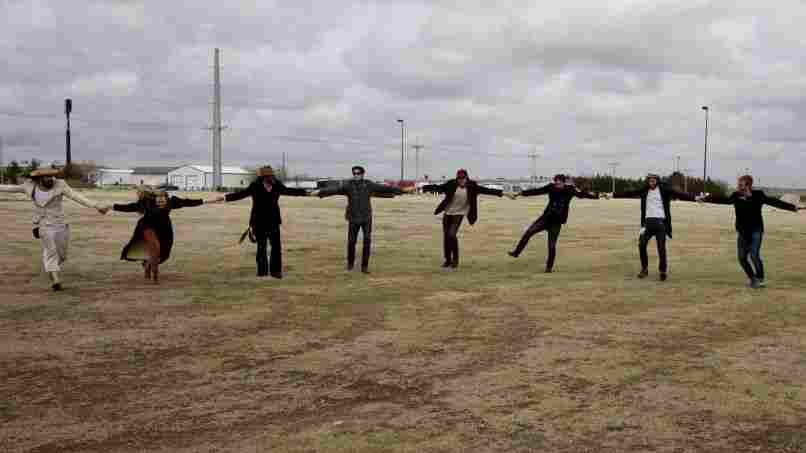 Edward Sharpe and the Magnetic Zeros' new album, Here, comes out May 29. Courtesy of the artist hide caption

As young musicians get older and more successful, many lose the ability to understand and convey what's it's like to want something without having had it. If you're looking for a unifying theory behind the proverbial "sophomore slump," it's often no more complicated than that: A successful first album is wired with want — with passion and aspiration — while its follow-up bears the weight of not only expectations, but also comfort. When they work, sequels find compelling ways to view life through the unfamiliar lens of success.

True to its title, Edward Sharpe and the Magnetic Zeros' first album, Up From Below, peeks out from a pretty deep hole. Singer Alex Ebert surveys a dark past that stretches back to his birth, then takes tentative steps to salvation — the embrace of friends and lovers and a lifestyle in which dependence is directed toward kind people instead of darker and more destructive elements. It's a back-from-the-brink record: Even its celebratory smash single "Home" revolves around happiness that's clearly hard-won.

For Here — out May 29, it's the first of two albums Edward Sharpe and the Magnetic Zeros will release this year — Ebert and company aren't so burdened with the weight of their pasts. Gone are Doors-ian ruminations on damnation like "Desert Song," and in their place are milder ballads about the aftermath and side effects of being saved. "Home" gets a clear-cut Part 2 in the anthemic "That's What's Up," another opportunity for Ebert and fellow singer Jade to sing to each other winningly; it may or may not endure the way the ubiquitous "Home" has, but it's a charmer.

"That's What's Up" is arguably Here's best song — it does make the strongest first impression — but it's not the only highlight. Jade gets another fine vocal showcase in "Fiya Wata," and Ebert finds peace with God in "I Don't Wanna Pray," while the band conjures up a worthy mission statement about celebration right out of the gate, in "Man on Fire." Like Up From Below, Here is occasionally undercut by production that's either timelessly simple or curiously swampy and primitive, depending on how faithfully you wish the band would re-create the three-dimensional energy of its amazing live shows. But both albums exist to serve the same purpose, and both succeed in their mission: They document sweet songs that search, seek and ultimately revel in the best of what they find.