Accessibility links
Mineral-Rich Mongolia Rapidly Becoming 'Mine-golia' Mongolia is in the midst of a dramatic economic boom as huge mining operations look to reshape the country. Some predict Mongolia's GDP will double in a decade. But this economic overhaul could put further pressure on Mongolia's traditional way of life.

What country had the world's fastest-growing economy last year?

If you guessed China or India, you'd be wrong.

In fact, it's Mongolia: Its economy grew at more than 17 percent in 2011, according to estimates. That's nearly twice as fast as China's.

Mongolia is rich in copper, coal and gold, and it's in the midst of a mineral boom. This marks a profound change for a country where two out of every five people make their living herding livestock. Extractive industry has become so pervasive, some Mongolians now refer to their homeland as "Minegolia."

For the poor, landlocked nation of fewer than 3 million people, mining represents a remarkable opportunity, but one that's also loaded with risks.

Doubling GDP In A Decade

Much of the focus these days is on Oyu Tolgoi, a mega-mine in Mongolia's South Gobi province, about 50 miles north of the Chinese border.

The mine — owned by international mining giant Rio Tinto, Canada's Ivanhoe Mines and the Mongolian government — is scheduled to produce its first copper ore in June and grow dramatically over the next five years.

Cameron McCrae, Oyu Tolgoi's Australian chief executive, estimates that the mine will be the world's third-largest copper and gold mine.

The mine is playing a substantial economic role even before it's operational, McCrae notes.

"At the moment, during construction, we probably make up 30 percent of the GDP of the country," he says.

Tuvshintugs Batdelger, who runs an economic think tank at the National University of Mongolia, says mining is helping to drive the economy of this Central Asian nation at an incredible pace.

"In the coming 10 years, average GDP growth will be 12 percent," he says. Even when you factor in inflation, "GDP in real terms more than doubles in 10 years' time."

Opportunity In The Gobi

Mining's impacts are visible throughout much of Mongolia, which is wedged between China and Russia and is nearly the size of Alaska. Hummers roll past the Louis Vuitton store and columned Soviet facades in Ulan Bator, the capital. Thousands of young Mongolians have moved to the middle of the Gobi to work at Oyu Tolgoi, which means "Turquoise Hill" in Mongolian, a name that's derived from the color copper turns when exposed to oxygen. 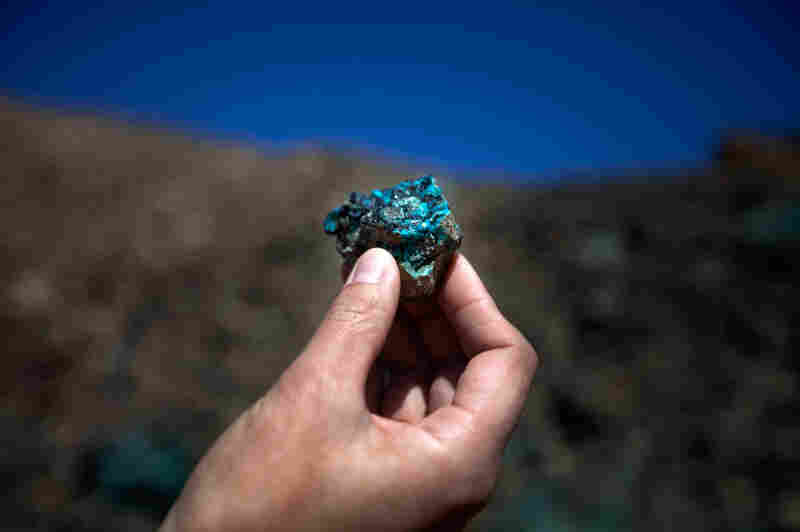 The mine at Oyu Tolgoi, Turquoise Hill in Mongolian, will be one of the world's largest copper mines in about five years. An employee holds up a small sample of the oxidized copper that gave the mine its name. John W. Poole/NPR hide caption 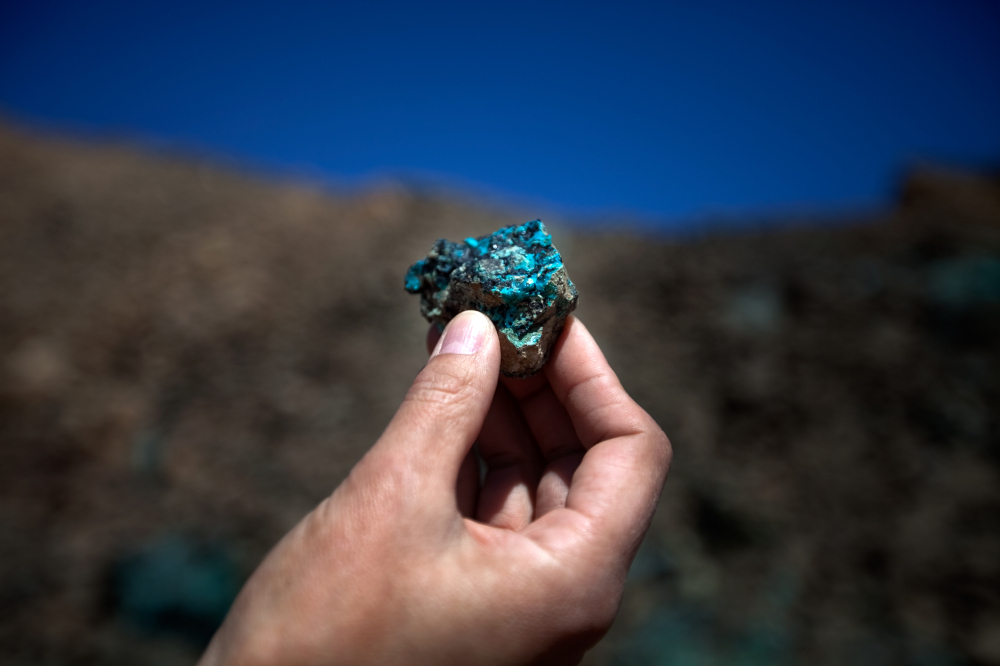 The mine at Oyu Tolgoi, Turquoise Hill in Mongolian, will be one of the world's largest copper mines in about five years. An employee holds up a small sample of the oxidized copper that gave the mine its name.

The mining camp, a mix of prefab housing and gers, or yurts, feels like a cross between a boomtown and a college fraternity.

The Mongolian workers are mostly in their 20s. At a recent birthday celebration, they sing Mongolian pop songs at the camp bar.

Solongo Namjil is a self-described country girl from the Mongolian steppe. The 22-year-old came to Oyu Tolgoi six months ago to work as a clerk and sees the mine as a crucial opportunity for her country.

"Every Mongolian here is doing their best for this project, which is enormous to Mongolia's future," she says between sips of beer. "We all understand the significance of the project. We do hope that every Mongolian can benefit."

But Solongo — Mongolians go by their first names — worries about mining's broader impact, particularly in South Gobi province, and on the thousands of herders who live there. Many are struggling with water-supply issues, and the mines need huge amounts to operate.

"I'm really concerned about that," she says, "that there won't be enough water for our children and children's children."

Building an economy on minerals presents other problems as well. For one thing, the economy becomes dependent on commodity prices that fluctuate. When the price of copper crashed in late 2008 during the global financial crisis, Mongolia's government had to call in the International Monetary Fund for help. 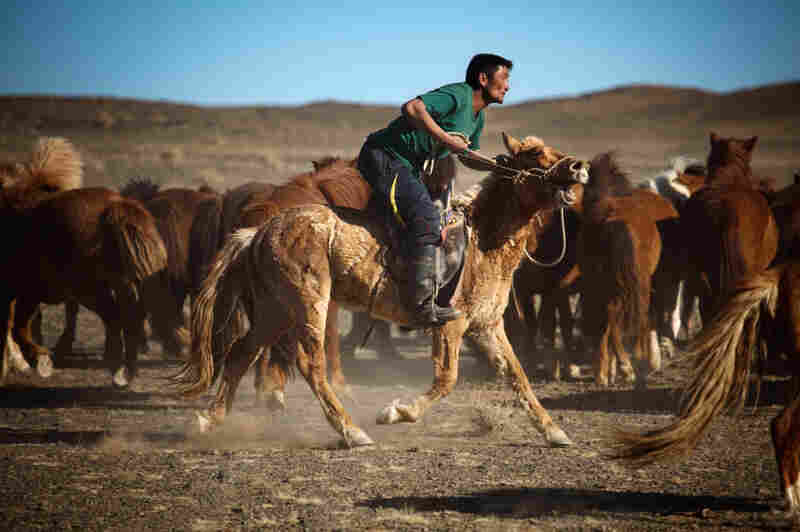 Horses were first domesticated in the area that is Mongolia today. The original cowboys, Mongolians ride on wooden saddles and are some of the best horsemen in the world. They're a part of Mongolia's traditional culture, which is under pressure from the mining boom. John W. Poole/NPR hide caption 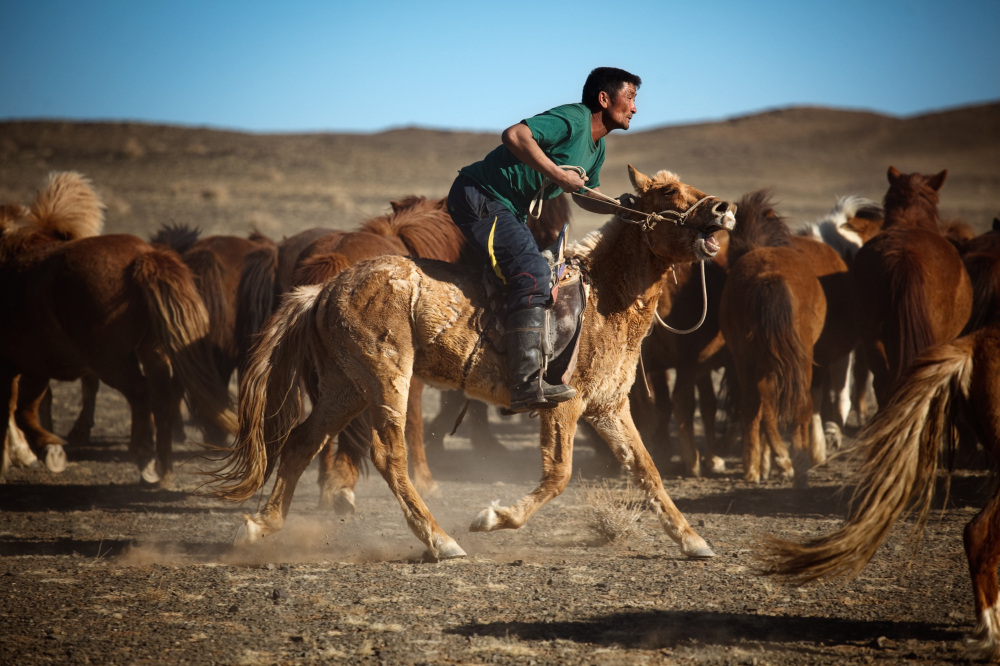 Horses were first domesticated in the area that is Mongolia today. The original cowboys, Mongolians ride on wooden saddles and are some of the best horsemen in the world. They're a part of Mongolia's traditional culture, which is under pressure from the mining boom.

When prices for natural resources are high, they can cause other problems and strangle important domestic industries. Heavy demand drives up the value of a country's currency, which makes its exports more expensive and harder to sell.

Rogier van den Brink of the World Bank says that's what happened after the Netherlands discovered huge natural gas reserves in late 1959. The syndrome became known as "Dutch Disease." Van den Brink, who is Dutch himself, remembers the damage.

"As a boy growing up in Holland, the impact of this was very stark to me," he says. "Sectors of the economy that we long had pride in, like the shipbuilding industry, we had to close them down."

Today, van den Brink is the World Bank's lead economist in the East Asia and Pacific region. He has worked closely with the Mongolian government to enact a law to enforce government savings and control spending and borrowing so it might avoid what happened in the Netherlands.

Landlocked Mongolia doesn't build ships, but it has other businesses that the mining boom could hurt. The Gobi cashmere company in Ulan Bator is already feeling the side effects. The firm turns raw cashmere from Mongolian goats into sweaters, jackets and shawls, and exports them to more than 40 countries. 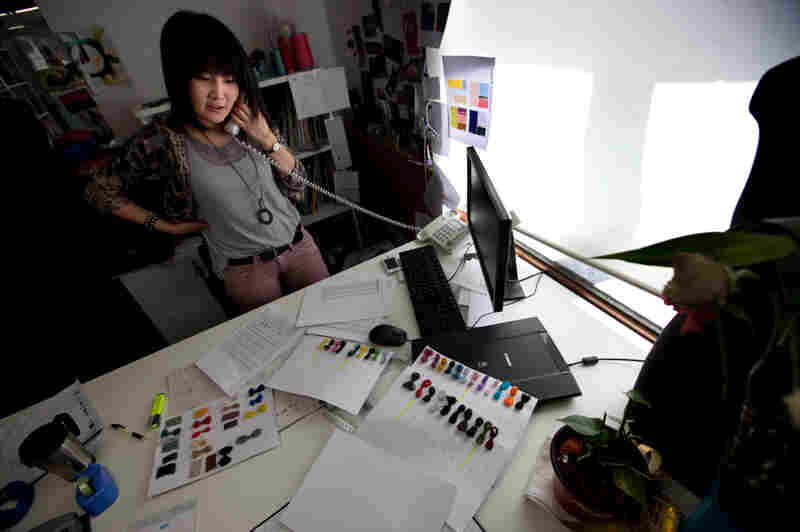 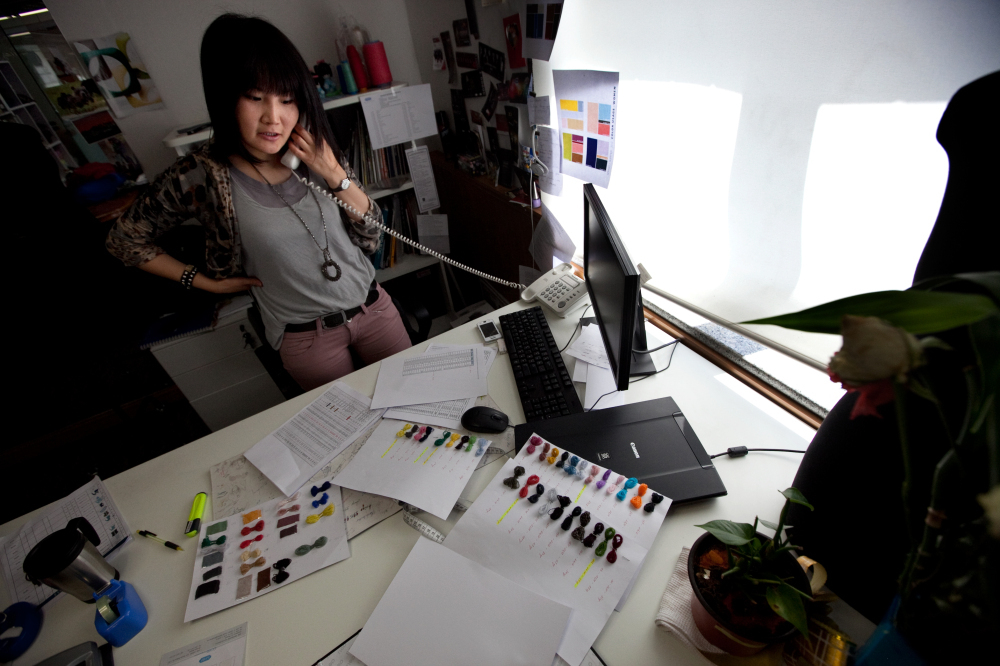 Clothing designer Ariunaa Suri works in her office at the Gobi cashmere company in Ulan Bator. Before mining, cashmere was Mongolia's main export.

Higher prices are good for Mongolian herders, but they cut into Gobi's profits. Naranbaatar says a special government policy is also undermining herders' incentive to work. This year — an election year — the government is giving citizens up to $770 each in one-time cash payments. It's essentially a mining dividend and, for many Mongolians, a lot of money.

"Livestock herding is almost a 16-hour-a-day job. It's a hard job, so you don't see many young herders anymore," he says. "Plus, the government gives out free cash."

Naranbaatar says mining brings many benefits to Mongolia. He just hopes people don't lose sight of an old, reliable industry like his.

"Mining resources are not renewable. Depending on the reserves, it may last 20, 50 or 100 years," he says. "If we use the right policies and preserve our nomadic herding traditions, many people will be employed in the Mongolian cashmere industry for hundreds and thousands of years."

Question Of Distributing The Wealth

Back at the bar at Oyu Tolgoi, it's closing time. Workers pour outside and continue to drink beneath street lights.

Many Mongolians worry that mineral companies and politicians will be the greatest beneficiaries of the mining boom. Solongo, the clerk, hopes some of her nation's new riches are used to improve the hard lives many Mongolians face.

"There is lots of poverty in Mongolia, almost 40 percent, which is unbelievable with this natural resource," she says. "We should find the right way to distribute the benefit of this resource to everyone. They deserve it."