Accessibility links
Spain's Beloved Four-Day Weekends Are At Risk As an austerity move, Spain is considering rearranging its holiday schedule. Holidays that fall on a Tuesday or Thursday tend to become four-day weekends. But now there's a move to mark them on Monday, and limit the weekend to three days. 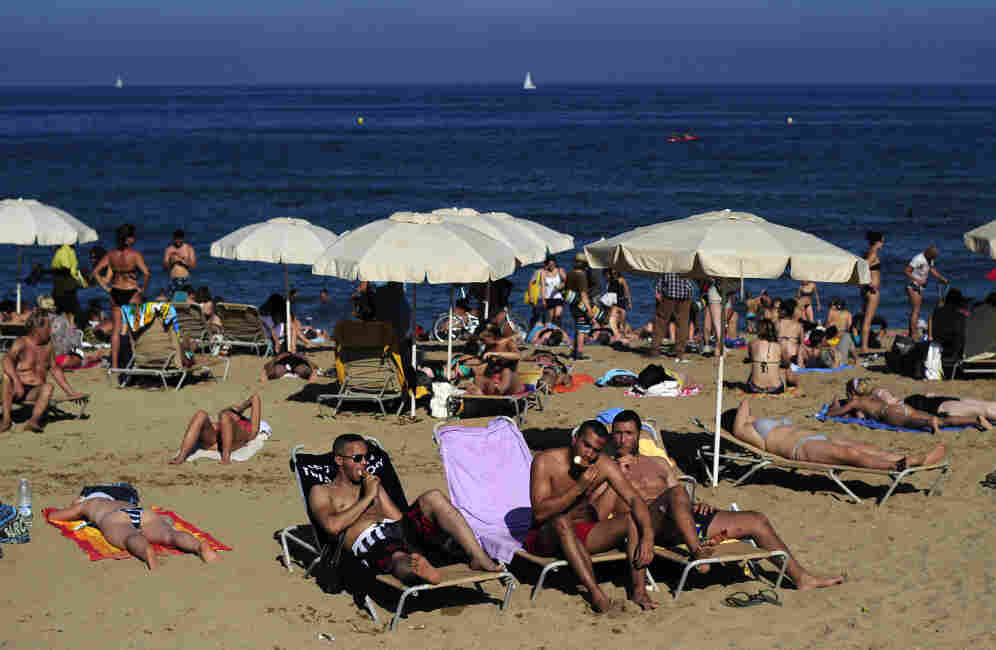 People relax at a beach in Barcelona, Spain, on a Monday last summer. Many Spanish workers are upset that some traditional four-day holiday weekends might be scaled back to just three days. Manu Fernandez/AP hide caption

One of the perks of living in Europe is the generous vacation schedule. But the austerity moves across the continent could be changing that, at least in some places. Portugal, for example, recently cut four of its 14 annual holidays.

And Spain is shuffling its calendar to shorten extended weekends — something the prime minister says it can no longer afford. The change could mean the loss of a celebrated tradition: the four-day weekend.

A Holiday For Bullfighting

The paso doble anthem blasts from the iron gates of Madrid's ornate bullring. It's a Tuesday in May, and the people of Madrid are off work yet again. It's a local holiday for the start of the spring bullfighting season.

Sangria flows at bars in the bullring's shadow. Most people haven't worked since Friday. It's what Spaniards call a puente — or bridge — weekend. When a holiday falls on a Tuesday, people skip work Monday — the bridge day — to make an extra-long weekend. Some offices close altogether.

Even people hit hard by Spain's recession, like Clara de Jorge, who's 23 and unemployed, find ways to celebrate.

"I didn't have money to go away, but I still try to enjoy it," she says. "Just staying in the park, going to museums — everything is for free. So that's what I do, because I can't afford going on a trip."

But these long weekends are about to get shorter. Later this year, the government plans to move any holidays that fall on a Tuesday or Thursday to Monday — similar to the way Americans celebrate Memorial Day or Labor Day. Four-day weekends will become just three days.

Every penny counts. Say it buys you half a billion euros' worth of GDP. I mean, then you don't need to scrape it from education or health care or other expenditures. So that's very nice.

De Jorge says that's not enough time to visit her family in Valencia.

"What we do on the puentes, we have a chance to get the car, get your family and go away for a few days," she says. "But if we have just three days, we're not going to have that chance to go to the country, go to the beach or whatever."

Getting On The World's Schedule

The Spanish government says the weekend shift is necessary to boost productivity and bring work schedules more in line with the rest of the world.

"I can remember working in the banking sector and the problems we had being on the same schedule with other financial centers," says former banker Gayle Allard, now an economist at Madrid's IE Business School.

"People were working their traditional day, with the long lunch," she says. "If they could kind of align working hours, drop the idea of the siesta — it actually might even be beneficial to Spaniards to work a more compact day and week."

But aside from regular Spaniards who relish their time off, there's also opposition from the Catholic Church. The church bristles at the idea that holidays like the Day of the Blessed Virgin's Immaculate Conception, for example, might be moved. Christmas and Easter would stay put, however.

Talks are under way to get Spain's different regions to agree, as well. The country's provinces all have their own holidays.

During any given week, at least one Spanish city is on vacation. That's frustrating to outsiders — such as EU leaders in northern Europe, whom Spain is trying to court, says economist Fernando Fernandez.

"This is the kind of symbolic change which gives an indication of the degree of reform commitment of the government," he says. "It's one of those things the markets love. They love to see that the government is determined to take unpopular decisions for the good of the nation."

'People Are Used To It'

The shorter weekends are likely to save the Spanish government some money — and that couldn't come at a better time, says Javier Diaz-Gimenez, a professor at IESE Business School.

"Every penny counts," he says. "Say it buys you half a billion euros' worth of GDP. I mean, then you don't need to scrape it from education or health care or other expenditures. So that's very nice."

But back near the bullring, Clara de Jorge says she's not convinced.

"We have these traditions, and we can't change that. People are used to it. I don't think that works," she says.

But de Jorge, like roughly half of 20-somethings here, is jobless. The government hopes that shorter weekends and wide-ranging labor reforms might — just might — help her and other young Spaniards find work.