Accessibility links
Blacks, Gays And The Church: A Complex Relationship While many black pastors condemn homosexuality from the pulpit, the choir lofts behind them are often filled with gay singers and musicians. The fact that gays and lesbians often hold leadership position in the church is the worst kept secret in black America.

Blacks, Gays And The Church: A Complex Relationship

Blacks, Gays And The Church: A Complex Relationship 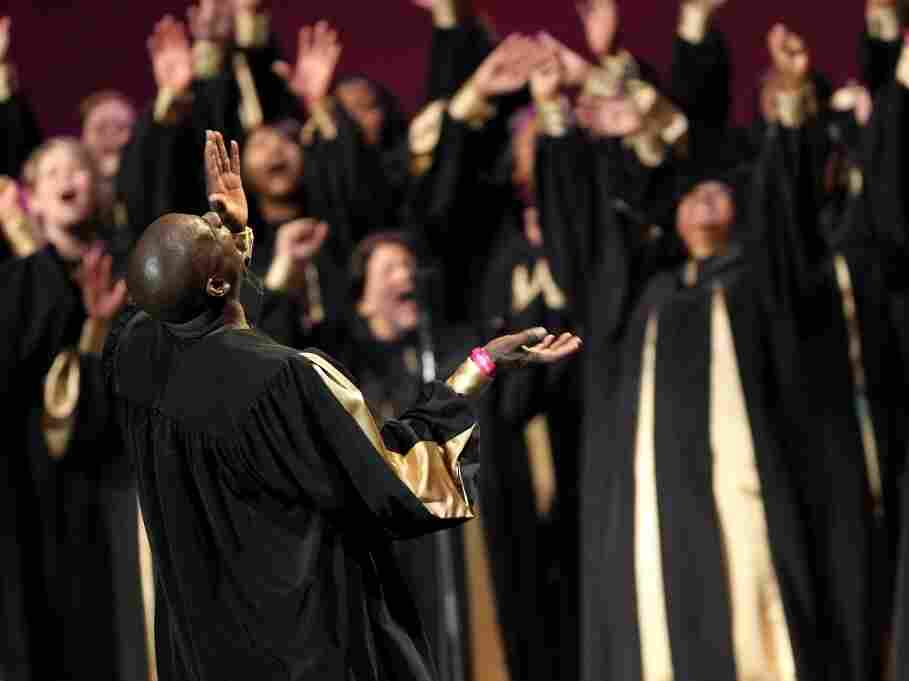 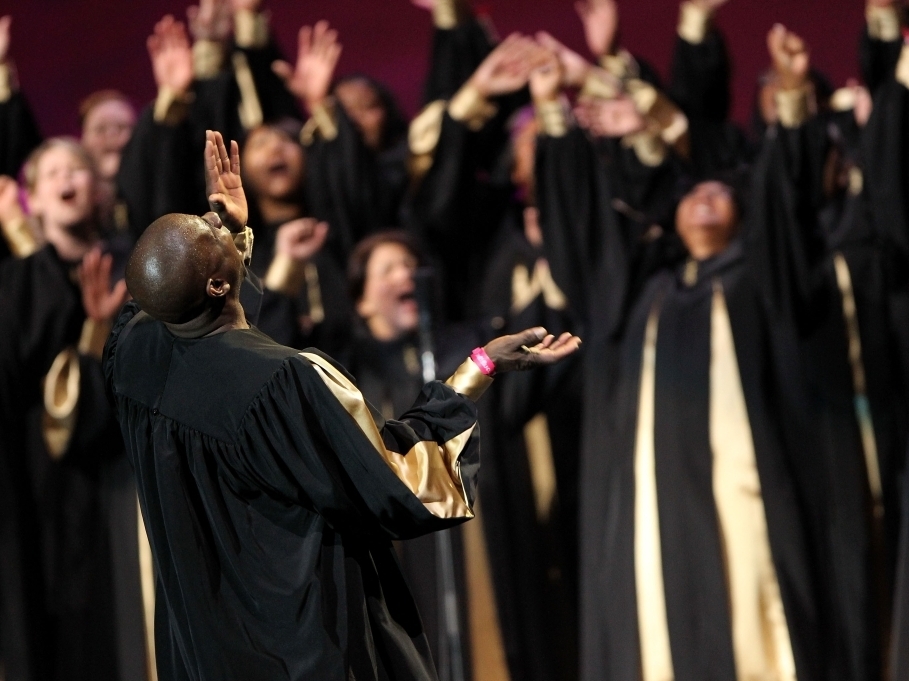 The Apostolic Tabernacle Mass Choir performs in Oakland, Calif., in 2010.

Fairly or not, African-Americans have become the public face of resistance to same-sex marriage, owing to their religious beliefs and the outspoken opposition of many black pastors.

Yet the presence of gays and lesbians in black churches is common. And the fact that they often hold leadership positions in their congregations is the worst kept secret in black America.

While many black pastors condemn gays and lesbians from the pulpit, the choir lofts behind them often are filled with gay singers and musicians. Some male pastors themselves have been entangled in scandals involving alleged affairs with men.

"Persons who are in the closet serve on the deacon boards, serve in the ministry, serve in every capacity in the church," the Rev. Dennis W. Wiley, pastor of Covenant Baptist United Church of Christ in Maryland, says of black churches. Wiley is a prominent advocate of gay marriage. "I do believe a certain hypocrisy is there."

Persons who are in the closet serve on the deacon boards, serve in the ministry, serve in every capacity in the church. ... I do believe a certain hypocrisy is there.

President Obama's recent announcement that he supports same-sex marriage turned the spotlight on reservations many blacks harbor about gay rights. Most polls show African-Americans evenly divided about gay marriage, but the vocal opposition, led by preachers, has gained more attention.

"This particular decision I find appalling, and I could not disagree with the president more on it," the Rev. Patrick Wooden, senior pastor of the Upper Room Church of God in Christ in North Carolina, said on NPR's All Things Considered. Wooden helped lead the recent campaign that outlawed gay marriage in his state.

Last week, the National Association for the Advancement of Colored People passed a resolution endorsing same-sex marriage as a civil right to be protected by the U.S. Constitution.

Some say pastors' hostility cuts hard against the history of how countless black churches have flourished. The virtuosity of gay singers, musicians and composers has been the driving force in developing popular gospel choirs — even chart-topping, Grammy-winning acts — that make money for a church, help expand congregations and raise the profiles of pastors.

It all happens under an unspoken "don't ask, don't tell" custom that allows gay people to be active in the church, though closeted, and churches to reap the benefits of their membership.

Some say the arrangement is not only hypocritical, but exploitative.

"On the one hand, you're nurtured in the choir but you also have to sit through some of those fire and brimstone sermons about homosexuality being an abomination," says E. Patrick Johnson, an openly gay gospel singer and author of Sweet Tea: An Oral History of Black Gay Men of the South. 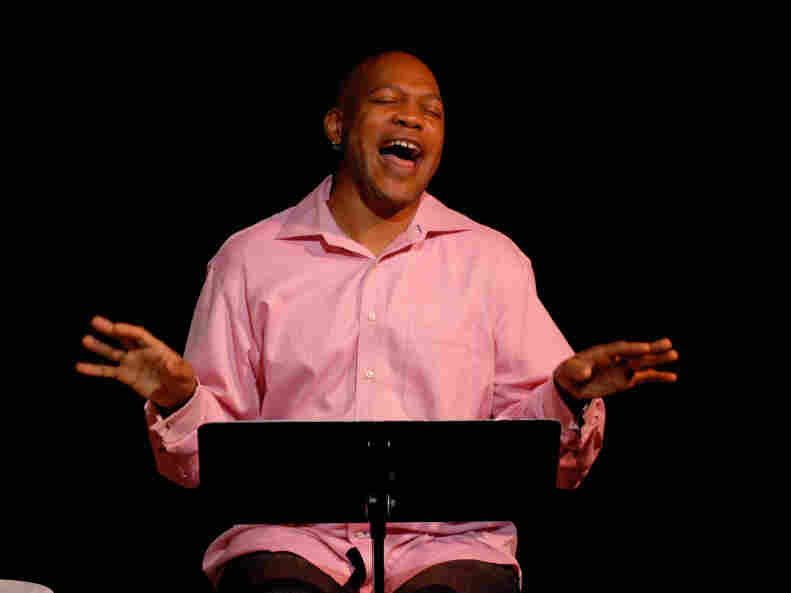 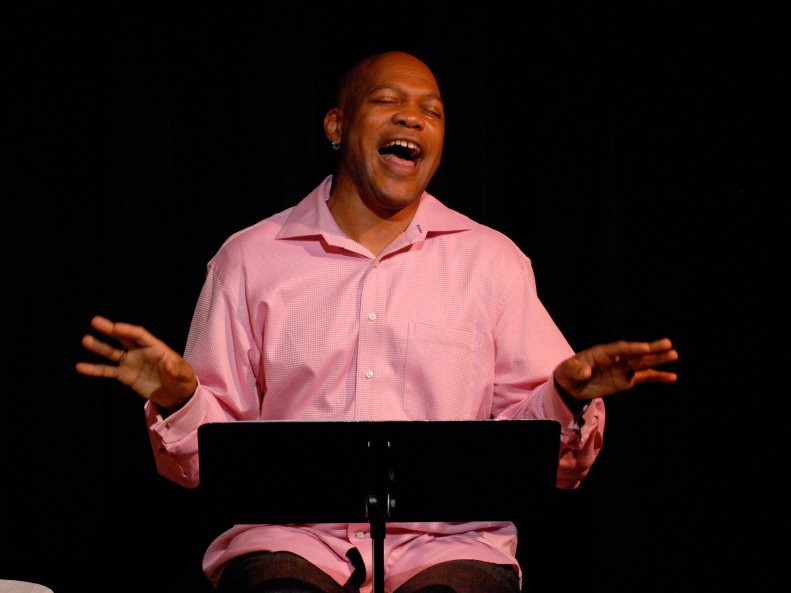 "But a lot of these choirs or choir directors, or ministers of music, will not be open about their sexuality for fear of repercussion from their pastors and church members, but they allow the church to exploit their talent," says Johnson, also a Northwestern University professor whose expertise includes black studies and sexuality.

Johnson and others believe that modern gospel music itself is largely defined by the artistry of black gay men.

Bishop Yvette Flunder of Oakland, Calif., is openly gay and the founder of The Fellowship, an organization of black pastors and churches openly welcoming of lesbian, gay, bisexual and transgender members. Flunder once said during a 2010 interview that gospel choirs "always" have been havens for LGBT people: "In our indigenous expression, that wasn't a problem. It was Christianity that demonized gay people."

As Johnson puts it, "You can't throw a shoe back through history without hitting gay and lesbian women and even transgender singers."

Johnson describes church choirs as a welcoming community within a community "where you meet other gay people, so it becomes a form of socializing."

Commentator Keith Boykin, who is African-American and gay, calls it a paradox: "The church might be the most homophobic and most homotolerant of any institution in the black community."

Wooden, the pastor in North Carolina, agrees that the presence of gays and lesbians in choirs or other church ministries reveals the "duplicity and, frankly, the hypocrisy of the black church. ... The thing that troubles me is these people are almost taken advantage of. As long as they can sing, people look the other way."

However, Wooden insists "we are not all homophobic." He says he welcomes members of the LGBT community to worship at his church. He says his church also has continued to support gay members who have contracted HIV/AIDS, unlike some other churches that ostracize them — a practice many people on both sides of the issue say has been common.

But that's where Wooden's self-described sense of fairness ends. He forbids LGBT people from participating in the choir or any other church ministries. 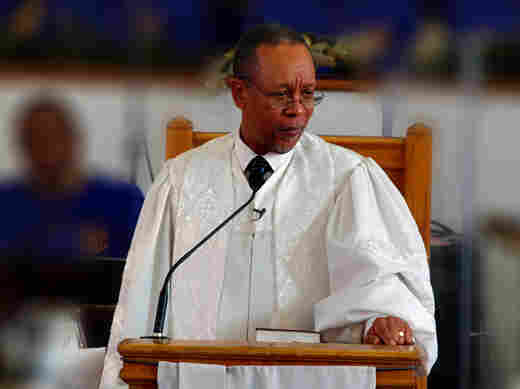 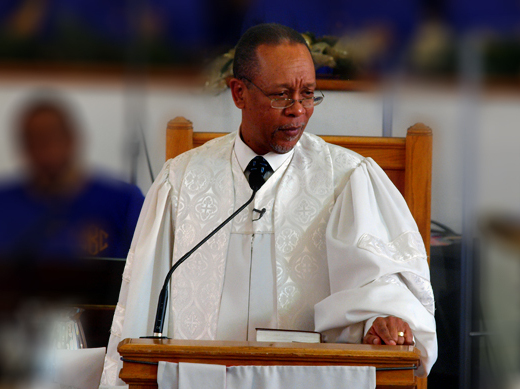 The Rev. Dennis Wiley of Covenant Baptist United Church of Christ in Maryland is a prominent advocate of gay marriage.

"If you love them — truly love them — you will tell them the truth on the front side," Wooden says. "We believe homosexuality is a sin. Those who serve, you want their lifestyles to uphold the standards of the church. This is not limited to homosexuals or lesbians. If I know an individual is committing adultery or living with a member of the opposite sex who they're not married to, they can't serve either."

Consequences, Whether Closeted Or Out

A small but growing number of churches, such as the Rev. Wiley's and Flunder's City of Refuge United Church of Christ, publicly welcome LGBT members, and their ranks are swelling with people leaving intolerant churches.

But many others say they are torn between their allegiance to their churches, which form the cultural and institutional backbone of black communities, and their desire to live free of homophobia. They often chose the former, convinced that their sexuality is a sin.

"They would rather suppress their identity than denounce their church," says Sharon J. Lettman-Hicks, executive director of the National Black Justice Coalition, an LGBT advocacy group. "I've seen people refuse to divorce themselves from their church in spite of the ignorance that spews from the pulpit. ... It's their way of repenting. They victimize themselves through self-oppression."

Gospel music superstar and megachurch pastor Donnie McClurkin shocked the non-gospel world years ago by revealing in a 2001 book that God "delivered" him from a gay "lifestyle" that he said was a result of being sexually abused as a boy.

McClurkin, who has said being gay is a choice, was criticized by the gay community for setting back the LGBT goal of gaining acceptance.

When gospel music star Tonex (Anthony Charles Williams II) came out in 2009, the gospel music world turned on him, and his record sales plummeted. He left his family church, where he'd been a pastor, and reinvented himself as B. Slade, now a favorite in the LGBT music scene.

For decades, black ministers addressed LGBT people in their sermons only occasionally. This was true even as HIV/AIDS began claiming the lives of numerous African-American men in black churches, especially gospel singers in the early 1990s.

By 2004, a number of high-profile black ministers emerged as outspoken opponents of same-sex marriage as part of their alignment with the conservative Christian movement, which helped re-elect President George W. Bush that year. Black ministers and black lawmakers helped pass gay marriage bans in several states. In exchange, ministers received federal funds for their community programs through Bush's faith-based initiative.

In 2006, the National Black Justice Coalition held its first Black Church Summit in Atlanta, at which the Rev. Al Sharpton became the highest-profile pastor to denounced homophobia and call for greater inclusion of LGBT people.

The sexual behavior of some male pastors, many of them also gospel singers, also has stoked rumors or led to scandal.

Bishop Eddie Long, the leader of one of the nation's largest black churches, in suburban Atlanta, was sued in 2010 by three young men who claimed Long coerced them into sexual relationships. Long denied the accusations and the cases were settled out of court.

The controversy was all the more notable because Long was a prominent supporter of Georgia's gay marriage ban, passed in 2004, and a proposed U.S. constitutional ban. He rankled many civil rights veterans when he and the Rev. Bernice King, a daughter of Martin Luther King Jr. and Coretta Scott King (who supported gay marriage), led a march to protest same-sex marriage that started at the King family crypt.

"Some of my colleagues protest too greatly," Wiley says.

Prior to the accusations against Long, most controversies rarely escaped mention inside black communities and gospel music circles.

The Bay Area in the 1970s had arguably the most visible presence of LGBT members in black churches, just as the broader gay rights movement had gained momentum in the region. The Love Center Church in Oakland, Calif., founded by the late Bishop Walter Hawkins, one of gospel music's biggest stars in the 1970s and 1980s, made waves for welcoming black gays and lesbians.

Following the 1991 death of the Rev. James Cleveland, the gospel music legend still regarded as the "king" of the genre, a male member of Cleveland's choir sued his estate claiming that he contracted HIV due to his five-year sexual relationship with the singing icon. The lawsuit was settled out of court.