Accessibility links
'It Worked For Me': Life Lessons From Colin Powell If you're looking for advice on leadership, it's good to start with a four-star general. In his new memoir, former Secretary of State Colin Powell offers advice and anecdotes drawn from his childhood in the Bronx and his military career — and reflects candidly about the lead-up to the Iraq war. 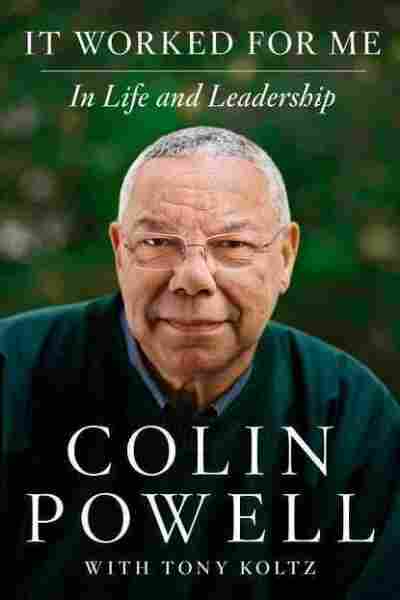 It Worked for Me

In Life and Leadership

by Colin Powell and Tony Koltz

If you're looking for advice on leadership, it's good to start with a four-star general. Colin Powell's new memoir, It Worked for Me: In Life and Leadership, is a collection of lessons learned and anecdotes drawn from his childhood in the Bronx, his military training and career, and his work under four presidential administrations. The memoir also includes Powell's candid reflections on the most controversial time in his career: the lead-up to the war in Iraq in 2003.

If there's a theme that runs throughout the book, it's Powell's love for the U.S. Army — from his days in ROTC, right through to becoming chairman of the Joint Chiefs of Staff. Powell says that back when he was a lost 17-year-old at City College of New York, ROTC "saved" him and kept him in school.

"I found my place. I found discipline, I found structure, I found people that were like me and I liked, and I fell in love with the Army those first few months in ROTC, and it lasted for the next 40-odd years," Powell tells NPR's Robert Siegel. "People have asked me, 'What would you have done if you hadn't gone into the Army?' I'd say I'd probably be a bus driver, I don't know."

'I'll Never Leave It Behind'

But he didn't become a bus driver — Powell went on to become U.S. secretary of state under President George W. Bush. In 2003, he gave a now-famous presentation to the U.N. Security Council on evidence of Saddam Hussein's weapons of mass destruction — which turned out not to exist. Powell addresses that presentation in his book — in what he says will be his first and last account of the affair.

The case for war had been made over the course of several months, and Powell says it had been accepted by the president, other world leaders, and most of the U.S. Congress. But he will always be remembered as "the one" who presented the information to the U.N. "When I presented it to the U.N., I had every assurance from the intelligence community that the information I had was correct," Powell says. "Turned out not to be." 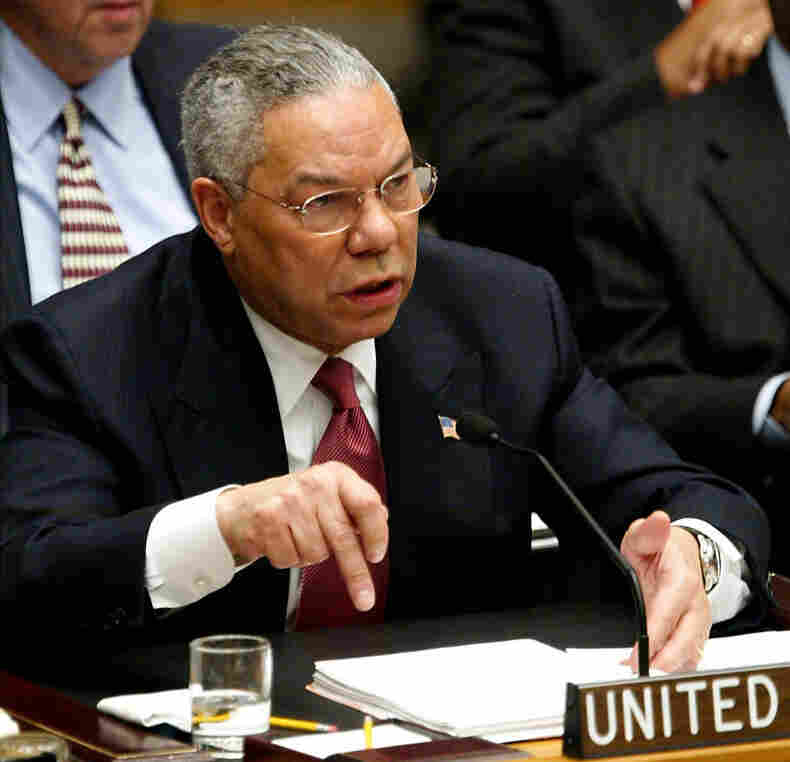 U.S. Secretary of State Colin Powell addresses the U.N. Security Council in New York on Feb. 5, 2003. He presented evidence of Iraq's weapons of mass destruction — that turned out not to exist. Mario Tama/Getty Images hide caption 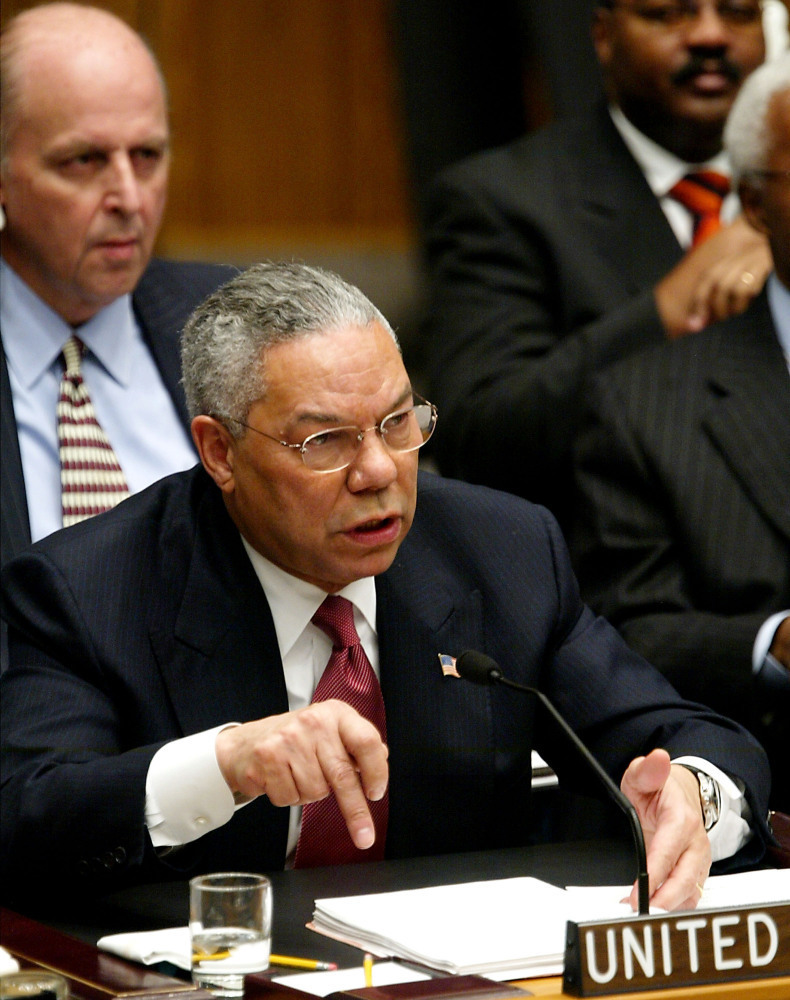 U.S. Secretary of State Colin Powell addresses the U.N. Security Council in New York on Feb. 5, 2003. He presented evidence of Iraq's weapons of mass destruction — that turned out not to exist.

Powell writes that he now knows that the draft that he and then-CIA Director George Tenet were presented with hadn't actually come through the National Security Council at the White House, but rather from Vice President Dick Cheney's office.

"But I didn't know that at the time," Powell says. "I knew when the president asked me to make the presentation — I knew that the NSC was supposed to have been working on it, and therefore I would get something that was a near-finished document."

He wasn't aware, he says, that Scooter Libby, counsel to the vice president, was working on the document and that "it was not connected to the intelligence material, and so I couldn't use it as it was given to me."

CIA officials later wrote memoirs remarking on how bad the evidence was, and Powell says that he wonders: Where were they when the national intelligence estimate was being assembled?

"Some of them say that they tried to get it up to the top levels of the CIA, that those sources should not be used," Powell says.

But he found it disturbing that after some of the intelligence information fell apart, CIA officials said: Well, we know they never should have been used by Powell.

After nearly eight years of war, the U.S. withdrew its last troops from Iraq in December. "The Army will take its lessons learned," Powell says. "They're excellent at looking into themselves and reflecting on what did we do right, what did we do wrong."

On the whole, Powell says the Army "did quite well," but that there were command issues that should have been handled differently. "A junior general should not have been suddenly given command of all of Iraq at that time," Powell says. "Some of the more senior commanders were sent home, and the central commander Gen. [Tommy] Franks essentially left and went into retirement."

There were also expectations about the course of the war that didn't turn out to be true.

"There was an assumption ... that this was all going to snap back in place, it would be easy once Baghdad fell," Powell says. "But it became obvious early on that was not going to be the case."

Gen. Franks and Secretary of Defense Donald Rumsfeld thought they had a sufficient number of troops — but greatly underestimated the force they would ultimately need. But Powell doesn't believe that the legacy of the Iraq war will be that the U.S. will always need more and more troops. And he doesn't think that's the right answer, either.

In one chapter, he refers to "The Powell Doctrine," which states: "Once you've decided what the political objective is and that you have to go to war, put in enough troops to be decisive," Powell says. "In this instance, the decisive point that they focused on was the fall of Baghdad, but ... that wasn't the end of the conflict; it was the beginning of a new phase of the conflict. Military planners should always be thinking about what happens after you accomplish that first thing, what else you're going to have to do." 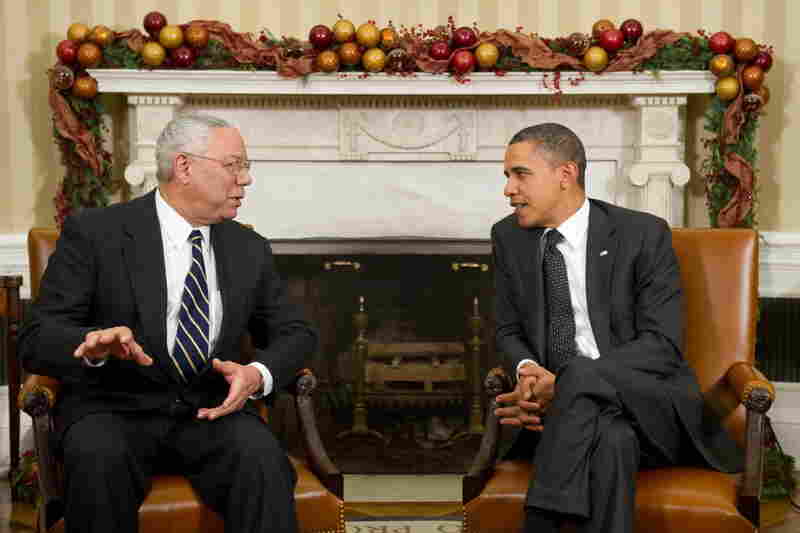 Powell endorsed Barack Obama for president in 2008. "I'm proud of the vote I cast for him in 2008, I think he was absolutely the right choice," Powell says. When it comes to the 2012 election, Powell says he's "not prepared" to say who he'll be voting for. Saul Loeb/AFP/Getty Images hide caption 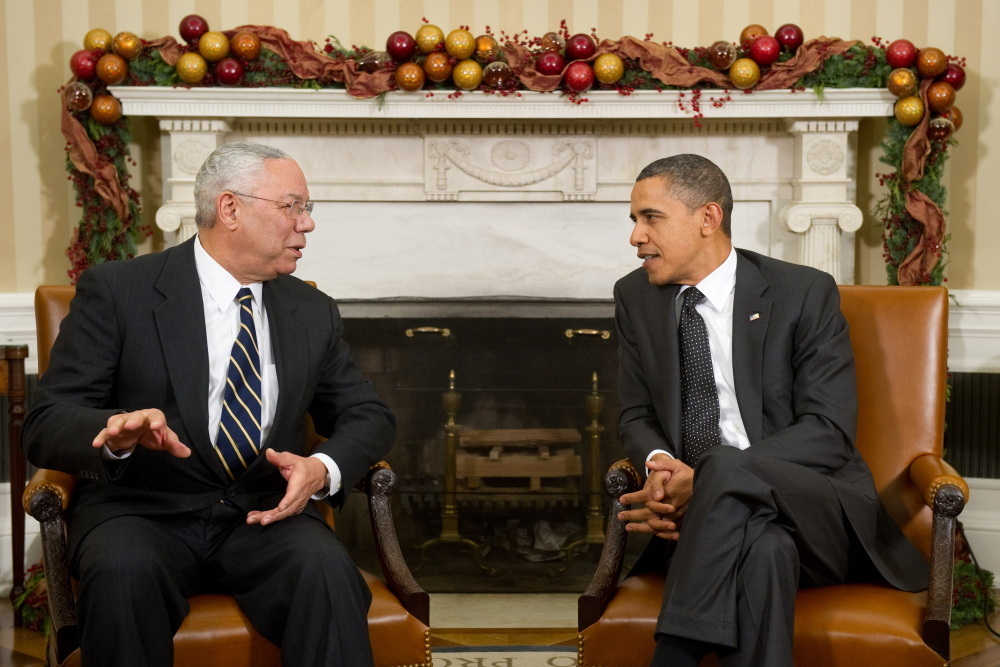 Powell endorsed Barack Obama for president in 2008. "I'm proud of the vote I cast for him in 2008, I think he was absolutely the right choice," Powell says. When it comes to the 2012 election, Powell says he's "not prepared" to say who he'll be voting for.

Another Vote For Obama?

Powell was a star in Republican administrations, but in 2008, he announced that he would be voting for Barack Obama for president. Now, four years later, he's not prepared to say whether he'll be voting for Obama again.

"I'm proud of the vote I cast for him in 2008, I think he was absolutely the right choice," Powell says. "I think he's done some very, very positive things to stabilize our financial system, save the auto industry, to bring some regulation into the mix, and we've ended one war — the one in Iraq — we're working on phasing out Afghanistan, and we haven't gotten into any new ones."

But he has plenty of critiques of the Obama administration as well. "We didn't close Guantanamo as I would have hoped, and we still have an unemployment rate that's too high, and the economy has not quite recovered." Powell says. "Whether that's all the fault of the president or not will be up to the people to decide."

Powell has known Romney for many years and says he's a "very distinguished gentleman." Powell is looking forward to hearing what Romney has to say in the coming months.

Read an excerpt of It Worked for Me