Accessibility links
Mongolians Scramble For A Share Of Mining Wealth A massive mine in the middle of the Gobi is providing opportunities to thousands of young Mongolians, drawing talent from other fields such as tourism. But some complain that foreigners earn more than locals, and those who can't find mining work are striking out on their own as illegal prospectors.

Ooarnkoyar Maikhuu spends 12 hours a day behind the wheel of a 60-ton dump truck hauling dirt from a giant, open-pit mine in the deserts of southern Mongolia. The 22-year-old single mother works at Oyu Tolgoi, which in a few years is expected to become one of the world's largest copper mines.

When she started working in the mine's cafeteria two years ago, Ooarnkoyar — Mongolians go by their first names — earned just $96 a month. Today, as a truck driver, she brings in nearly $1,400 a month, compared to the country's annual per capita GDP of about $2,500.

"I just got a loan on my salary and just bought a little plot of land," says Ooarnkoyar, whose work ensemble includes a white hard hat, gold hoop earrings and sparkly lip gloss. "When my son grows up, I want to move into Ulan Bator [Mongolia's capital] and buy an apartment, and I want my son to go to school there."

Mongolia is in the midst of a mining boom and people like Ooarnkoyar are among the prime beneficiaries. Last year, the country's economy grew by more than 17 percent, nearly twice the pace of its southern neighbor, China.

Oyu Tolgoi is scheduled to produce its first copper ore next month, and as more mines open, they're providing good jobs in the country of nearly 3 million people, where about one-third of them scrape by on $1.25 a day.

Thousands of young Mongolians have descended on Oyu Tolgoi to improve their lives. Oyu Tolgoi — which means Turquoise Hill in Mongolian and refers to the color of copper when it's exposed to oxygen — is more than 300 miles south of Ulan Bator, but it might as well be in the middle of nowhere.

The mine camp is a self-contained city of about 14,000 people surrounded by the lunar landscape of the Gobi, where the nearest neighbors are mostly camels, goats and sheep. Weather in the area features sandstorms, tornadoes and temperatures that drop to 40 below zero in winter and soar to 135 in the summer. 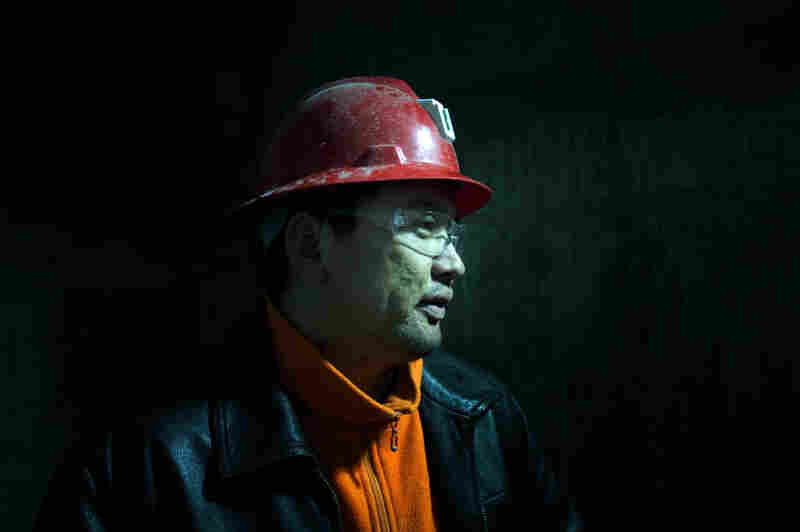 Tseren-ochir is a superintendent at Oyu Tolgoi mine who goes by the name "Augie" because it's easier for the foreigners he works with to pronounce. He is overseeing workers digging a nearly 5,000-foot-deep shaft down to reach the copper ore. John W. Poole/NPR hide caption 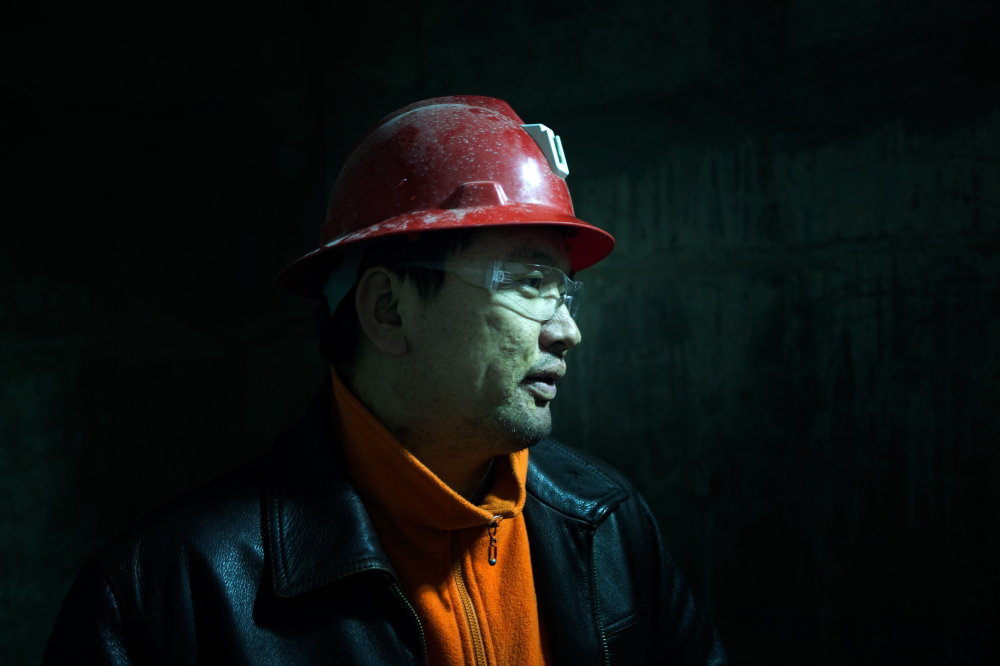 Tseren-ochir is a superintendent at Oyu Tolgoi mine who goes by the name "Augie" because it's easier for the foreigners he works with to pronounce. He is overseeing workers digging a nearly 5,000-foot-deep shaft down to reach the copper ore.

The camp has two bank branches, a grocery store and a barbershop. In the evenings after work, miners play basketball outside and table tennis inside a Quonset hut.

From 7 to 9 p.m., the camp bar serves beer by the case beneath black lights. The clientele ranges from young Mongolian women just out of college to grizzled, 50-something miners from Australia.

Tseren-ochir, who says he is in his mid-30s, is a mine superintendent. He introduces himself as Augie, because it's easier for the foreigners he works with to pronounce.

He is directing workers to dig a nearly 5,000-feet-deep shaft straight down to reach the copper ore. Augie says Rio Tinto and Ivanhoe Mines, the huge foreign mining companies that are majority owners of Oyu Tolgoi, provide great on-the-job training for Mongolian workers.

Peering into the giant shaft that plunges into the earth, Augie says 18- and 19-year-old men who came to Oyu Tolgoi five or six years ago are now "international miners."

"They can operate the latest technology underground. Those guys are fantastic," Augie says.

People work long stints at Oyu Tolgoi, and Augie is no different. His current rotation is 56 days on site, 14 days back home. He says the hardest part about his work is being away from his young family.

Privately, though, Mongolians complain that foreign workers from Canada and Australia with similar skills make at least three times more.

Mining provides opportunities for Mongolian workers, but it also siphons away talent from other important industries — like tourism.

"We lose at least four people a year," says Batbayar Amgalanbayar, who runs Mongolian Expeditions and Tours in Ulan Bator. 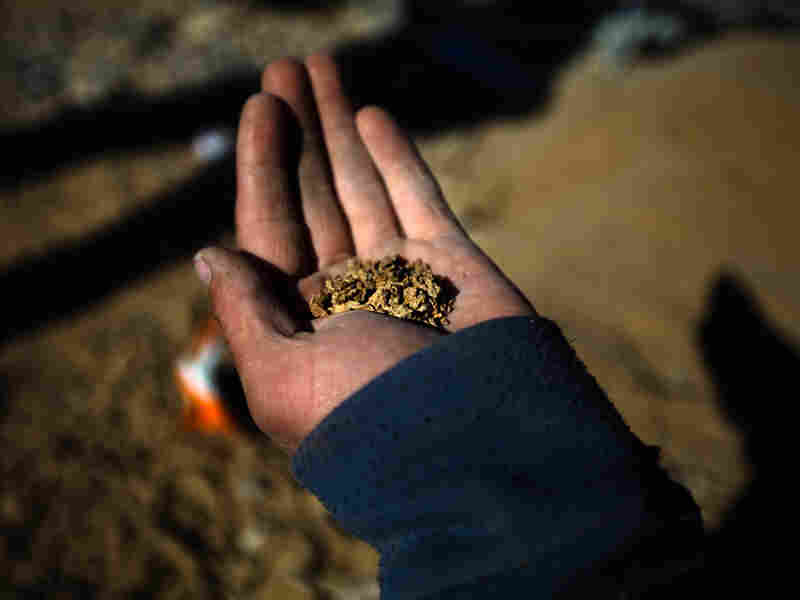 Some Mongolians are striking out on their own. This kind of mining is technically illegal, but many Mongolians do it in order to supplement their incomes. A prospector in the South Gobi shows off the results of two days of labor — a good-sized palmful of pure gold nuggets. John W. Poole/NPR hide caption 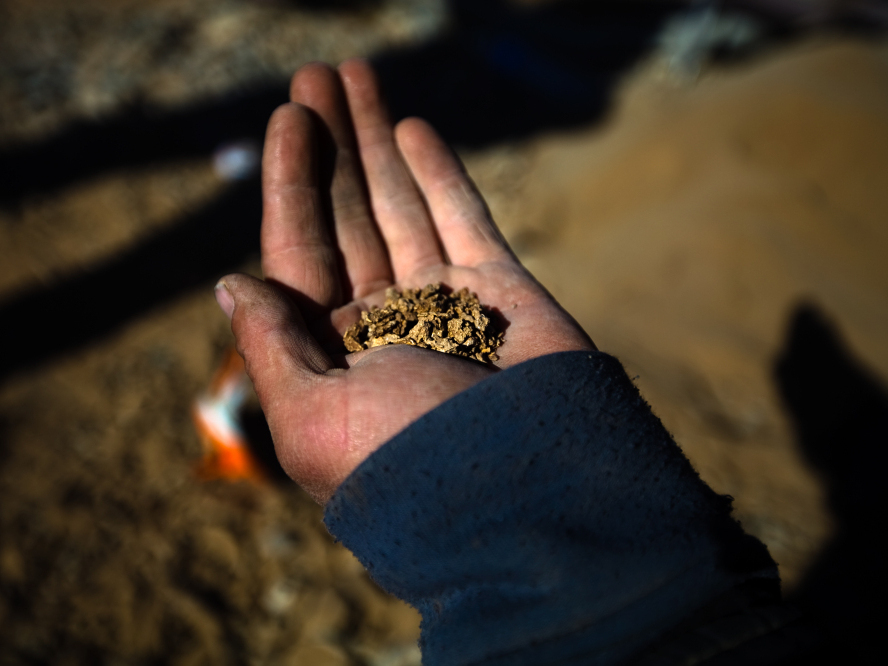 Some Mongolians are striking out on their own. This kind of mining is technically illegal, but many Mongolians do it in order to supplement their incomes. A prospector in the South Gobi shows off the results of two days of labor — a good-sized palmful of pure gold nuggets.

He says mining companies routinely poach his best drivers and translators. Mongolian Expeditions offers everything from horseback-riding trips to winter kite-skiing, but Batbayar says he has already had to turn away business this year because he couldn't staff some trips.

Workers in the Gobi who can't get hired by mining companies often strike out on their own. Mongolia has an estimated 70,000 illegal gold prospectors.

They're called "ninjas," a name a mining union leader says originates from the fact that they cover their mouths and heads with bandanas. Others say they earned the nickname because they carry mining pans on their backs and resemble TV's Teenage Mutant Ninja Turtles.

A ninja prospecting camp looks like a scene out of the California Gold Rush, updated for the 21st century. In one ravine deep in the desert, miners park their minivans, SUVs and jeeps along a dry river bed.

After selecting a spot with the help of metal detectors, they dig pits with shovels, pickaxes, jackhammers and power drills. They pour soil through sifters until they find pebble-sized bits of gold or, in some cases, actual nuggets.

Various mining teams display their hauls, pouring small, yellow rocks out of tiny, white pill bottles. They say they can sell an ounce for about $150.

Batbildeg has been mining for two to three years.

Getting A Piece Of Mining Boom

Another prospector, Batbold Badrakh, hovers over his mine, a 4-foot-deep pit. He served as a soldier in the 1980s when Mongolia was a Soviet satellite, but has struggled since.

"I did look for jobs, but now I'm over 40, no one is going to hire me anyway," says Batbold, who wears a gray cap and has a lined face that looks a decade older than his 42 years.

"I tried with Oyu Tolgoi, but they won't hire me," he says. "First of all, my health is not good enough for them. And I have a family. And I can't leave them for a year."

Batbold can't lift heavy objects because he has a bad back, but he can still manage to run a sifter. That seems to be enough for the three other members of his crew, and it's the only way Batbold can get a small piece of the action that is Mongolia's mining boom.